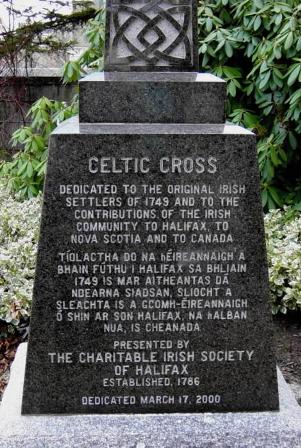 While Nova Scotia’s name may pay homage to the province’s Scottish roots, the Irish have a significant presence in the Atlantic Canadian province as well.

The Irish have been part of Nova Scotia since Roger Casey arrived in the 1660s, married an Acadian and began the Caissy family. There were Irish at Louisbourg and at the founding of Halifax, and so many Irish were employed in the annual summer fishery along the province’s Atlantic coastline that the entire region was known to them for centuries as Talimh An Eisc (‘The Land of the Fish’). You can find the Irish among the first settlers in almost any community in this province – they’re everywhere!

Most people connect Irish emigration to North America with the Potato Famine of the late 1840s. The majority coming to Nova Scotia, however, arrived in the mid-1700s or between 1815 and 1845, coming not in large groups but quietly, like the snow on a roof.

The first wave arrived in the late 1750s, a time when Ireland was largely a country of tenant farmers and labourers, with an economy dependent on Great Britain and its protective tariffs. These economic barriers, plus the prospect of land ownership in North America, led many to emigrate, particularly from the northern counties of Londonderry, Donegal, Tyrone and Antrim.

Those who came to Nova Scotia were soon joined by others who had previously emigrated from northern Ireland and were living in New Hampshire. Together, they were called the ‘Scots-Irish’ although this is not an entirely accurate term.

Most of the northern Irish who came to Nova Scotia in the 1750s and 1760s were third and fourth-generation descendants of Lowland Scots, transplanted to the northern Irish province of Ulster. They are more accurately called ‘Scots from Ireland’ or ‘Ulster Scots,’ since few of them had native An Irish Sense of Humor ancestry.

These immigrants were the founders of Truro and Londonderry in Nova Scotia. Others settled in Chignecto (on the New Brunswick border) and in Granville, New Dublin (near Bridgewater), New Donegal (Pictou) and in parts of Hants County. Archibald, Allison, Parks, Fulton and Creelman are typical family names. The ‘Ulster Scots’ are often considered part of the larger New England Planter settlement of Nova Scotia, which occurred at the same time.

The second wave of Irish arrived between 1815 and 1845. The population of Ireland had more than doubled in the fifty years before 1815, and the country could not support so many people. Religious animosity, civil disorder, and an unpopular forced union with Great Britain in 1801 combined with the opportunities offered in America to make the idea of emigration attractive.

Nova Scotia received thousands of people from the southern Irish counties of Wexford, Waterford, Kilkenny, Tipperary, Cork and Kerry. Their main ports of arrival were Halifax and Pictou, although smaller numbers landed at the Gut of Canso, Sydney, Yarmouth and other ports. Some became fishermen, but many applied for free land from the government in order to start farming.

Some of these later Irish were veterans of the Napoleonic Wars, such as the dozens of families who settled central western Nova Scotia in communities such as New Ross, East and West Dalhousie, and elsewhere along the old proposed Annapolis Road, linking Halifax to Annapolis Royal.

Halifax and Dartmouth were focal points for southern Irish arriving after 1815. By the early 1860s, nearly 50% of the population in the two communities was Irish. The main attraction was steady employment for labourers and skilled tradesmen.

During the late 1820s much of the Halifax waterfront was rebuilt in wharves, warehouses and walled lanes. Work on the Halifax Citadel continued intermittently, and across the harbour in Dartmouth there was a demand for masons and carpenters to construct the Shubenacadie Canal, intended as an overland waterway through the heart of Nova Scotia to the Minas Basin.

These works required massive supplies of granite, much of which was quarried by Irish labourers on the western hills of Halifax’s Northwest Arm. In mid-century the building of railways began in Nova Scotia, and many of the navvies were Irishmen.

Drive through Herring Cove and Ketch Harbour, just outside Halifax, and you will see villages founded by Irish fishing families with names like Dempsey and Hayes, Flemming and Sullivan. Between Halifax and Windsor, you can visit Uniacke House, today part of the Nova Scotia Museum complex, but originally the country estate of Richard John Uniacke, a native of County Cork.

Take in a Cape Breton ceilidh and an appreciative ear will detect the Irish influence on that island’s rich musical heritage. From Donovans at Ingonish to Murphys in Yarmouth, you’ll find an Irish presence in Nova Scotia wherever you look.