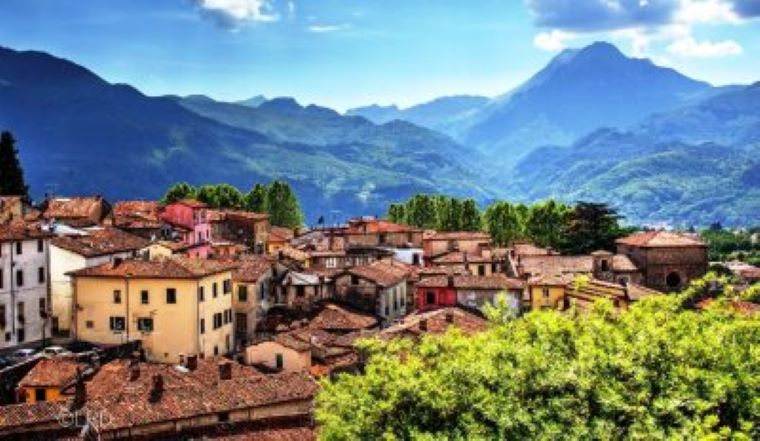 Before visiting any foreign country, it is customary and polite to learn a few words of the local language such as ‘good morning’, ‘please’ and ‘thank you’. In the historic Tuscan hilltop village of Barga overlooking Italy’s stunning Serchio Valley, however, my efforts at Italian were met not only with replies in English, but often with a distinctly Scottish accent. My curiosity was further piqued by a plaque on a wall proclaiming Barga as “The Most Scottish Town in Italy.”

In order to unravel the mystery behind the claim I took a walk through the old streets, accompanied by local resident Sonia Ercolini and local historian Virginia Fabbri.

Barga is beautiful and unspoiled; a place of narrow lanes, hidden piazze, steep stone staircases, ornate wooden doors, and shuttered windows bedecked with geraniums. Winding our way through the stone-paved streets I saw several flags hanging limp in the heat of the day – Italian, Brazilian (the Brazilian Expeditionary Force fought alongside the Allied forces on the Gothic Line around Barga in WWII), and the Scottish Saltire.

There are various legends linking Barga and Scotland; some sources claim that during the 1890s the Duke of Argyll took ill while staying in nearby Lucca and was taken to Barga to recuperate in the clean air of a landscape not dissimilar to his homeland. In thanks he offered to employ local foresters on his estate in Scotland, thus establishing a link that exists to this day. My preferred tale is that a group of Barghigiani were en-route to America via Scotland, but spent so much time enjoying the hospitality of a Scottish pub that they missed the boat and ended up staying!

For Fabbri the answer is more pragmatic. 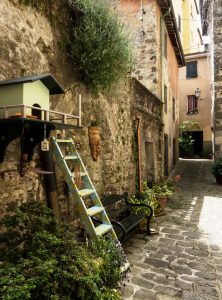 “The latter part of the 19th century saw great political change and economic disruption in Italy, and the people of Barga found themselves struggling to make a living from the poor quality of the area’s agricultural land. Many sought a better life elsewhere.”

It isn’t clear why some emigrants chose Scotland, but it is possible that they were headed for the Americas and found work and opportunities on the way.

Such events can trigger ‘chain-migrations’ – where migrants from a particular town follow others from the same town to a new location.

Chain-migration is familiar to Ercolini, “My great-grandfather Pietro emigrated to Scotland at the beginning of the 20th century. My grandfather Raffaello followed him and my father Peter was born there, although he spent most of his childhood in Barga before returning to Glasgow in his teens to work in the family fish and chip shop.”

Similarly, Ercolini’s mother Silvana was born in Ghivizzano, near Barga, but after WWII was forced to go to Glasgow and work in her aunt’s fish and chip shop. It was in Glasgow that Ercolini’s parents met, got married, and set up their own fish and chip shop. Ercolini and her brother Ralph were educated in Glasgow, but returned to Barga where they have lived since.

We called in at the hostel of Scottish born Adele Pierotti, who explained her family’s connection with Scotland.

“In 1886, my great-grandfather left to work in the coal mines of Wishaw. In turn, he sent for my grandfather and soon the family established a fish and chip shop in Cathcart where my father and his brother became fish-friers.” Her husband, Riccardo Orsucci, worked as a chef in Glasgow and, having run several restaurants over the years, has just opened a new fish restaurant – Giro di Boa – in Barga.

Back in the streets of the old town we climbed to the crest of the hill and rested by the impressive Duomo di San Cristoforo (Cathedral of St. Christopher.)

St. Christopher is the patron saint of Barga, although no one is certain why.

The views across the valley to the Apuan Alps are stunning, and the strategic importance of Barga’s location is self-evident. Constructed with local limestone, and sparkling under the Tuscan sun, the cathedral is the best example of Romanesque architecture in the Serchio valley. 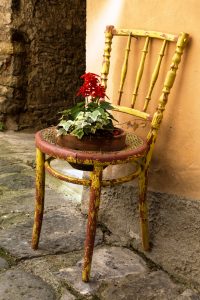 Exiting the city walls through the Porta Reale, we called in at Il Bar del Paologas to meet the owner Paolo Marchetti. Apart from his obvious Scottish-Italian accent the first thing I noticed were the green and white hoops of a Celtic Football Club shirt hanging from the ceiling along with a photograph of the former Celtic striker Henrik Larsson on a green and white wall aside a host of other Celtic memorabilia. The bar boasted a decent selection of Scottish whiskies and a sign that said ‘Proud to serve Scotland’. Over a drink, Marchetti reiterated a now-familiar story.

“My father moved to Scotland in the early 1900s because my aunt was already there. I was born in Barga, but grew up in Scotland where my parents had a fish and chip shop in Byres Road in Glasgow.” Marchetti spent his summer holidays in Barga, and by the time he returned permanently at the age of nineteen he was an avid Celtic supporter. His Italian friends soon shared his passion and they formed the local football team, Gatti Randagi (Stray Cats) in 1991. Gatti Randagi was welcomed at Celtic Park in Glasgow last year. As for their football strip – well, naturally it is green and white hoops! Marchetti is also ranked second in the Italian 250CC 2-stroke Motorcycle Championships, and Il Bar del Paologas is also home to a sizeable collection of trophies that he has won on his self-built Benelli. As the rest of the world knows, Italians love football and motorcycles!

It is estimated that 70 per cent of Barga’s population of 10,000 has connections with Scotland.

When their ancestors first arrived as poor migrants they found work wherever they could; in the coalmines, shipyards, textile and catering industries amongst others. With an indomitable spirit, they worked long, hard hours making enough money to bring other family members over. They learned to use the skills they brought with them, including their ability to make wonderful ice cream, and an inventiveness when using local produce such as fish and potatoes to create new dishes (disclaimer; fish and chips is not a traditional Italian dish!) The new tastes appealed to their Scottish hosts and it wasn’t long before the Barghigiani migrants opened coffee shops, ice cream parlours, and fish and chip restaurants. The prosperity that came with their hard work and endeavour over the years enabled many to return to Barga and build sizeable villas in Il Giardino (The Garden), the new section of Barga that is located below the old town. 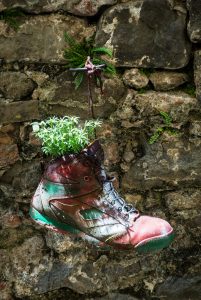 By the Via Giovanni Pascoli – the road linking the old and new parts of Barga – Ercolini pointed out ‘the smallest library in Italy’ – a red, U.K. telephone box filled with books for the community to share. It was shipped from Scotland to Barga by former fish and chip shop owner Mauro Cecchini, whose family originally hailed from Barga. We called into Ercolini’s brother’s shop – La Bottega del Pane. As well as local produce, he caters for a community still seeking things they became familiar with in Scotland. On the shelves I noticed Irn-Bru, porridge oats, oatcakes, shortbread and tea!

For a small town Barga punches well above its weight culturally.

The Scottish painter John Bellany, who depicted Barga in many of his paintings, is commemorated on a plaque in Piazza Anglio. As well, the great Italian poet Giovanni Pascoli settled here, and the composer Puccini was a regular visitor. The town theatre, Teatro Dei Differenti has been established for two hundred years, and there is an annual international Opera Barga Festival and Barga Jazz Festival. Barga’s impressive program of summer events includes a Scottish Week, with a special school dedicated to teaching traditional Scottish and Gaelic songs, music and dance. Organized by Scottish musician and bagpipe maker Hamish Moore, the course features world-renowned tutors from Scotland and Cape Breton and culminates in an outdoor public performance in one of Barga’s main piazze. Of course no summer festival program in Barga would be complete without an event to mark the very thing that brought so many Barghigiani the good fortune that they sought when emigrating all those years ago – a three-week long Fish and Chip Festival! ~ Story by Tom Langlands