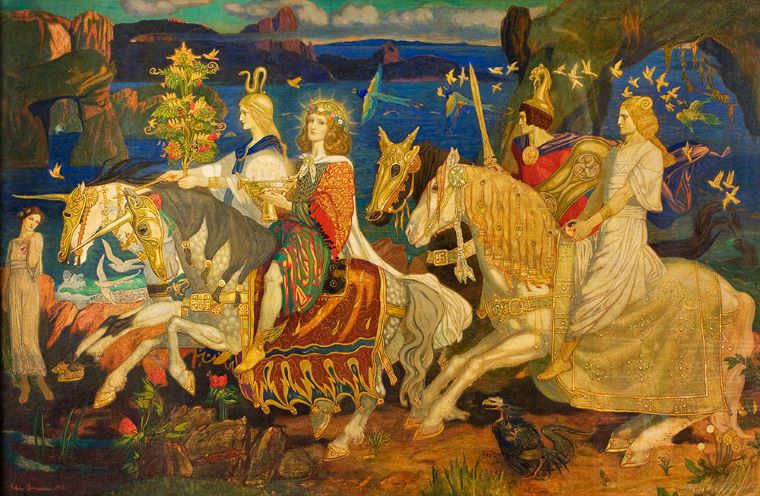 When the Tuatha de Danann arrived in Ireland, they brought with them 4 sacred objects which feature in Celtic Mythology; the Stone of Destiny, the Spear of Lugh the Sword of Nuada, and the Cauldron of the Dagda.

The Sword of Nuada
Nuada or Nuada of the Silver Hand like the Germanic God Tir was one handed. He lost one of his hands in battle whilst Tir lost his hand as the result of a false oath made to the Fenris wolf. Nuada was the first king of the Tuatha De Danann and had cognates with the Welsh Nudd and the Gaulish Nodens. A silver hand was fitted to replace his natural one, but the blemish made him unfit to rule the Tuatha De Danann. Interestingly Tir was the original Germanic sky God and may be traced back to a much earlier Indo-European deity long before the emergence of Woden who was subsequently portrayed as Tir`s father and became the primary God of the Teutonic peoples in Tir`s place. The Germanic myths do not explain this apparent `fall from grace`. The Common Germanic Tiwaz rune stave is Tir`s rune and may be esotrically linked to this sacred object. Some Wodenists also make an association with the Northumbrian rune stave Cweorth although for the time being I can detect no direct link with the sword. Its appearance at the end of the 33 Northumbrian rune row makes it very tempting to draw such an association as the other 3 `Grail` runes certainly are linked with these sacred Celtic treasures.

The Stone of Destiny
This sacred stone is the stone on which the High Kings of Eire stood at Tara to confirm their right to the throne. It would confirm the election of the rightful ruler by roaring. The stone was sent to Scotland in the 6th century CE for the crowning of Fergus the Great. An ancient prophecy said that wherever the stone was a king of the Scotic race would reign. The said stone was further removed to England in 1297 by Edward I and became the Coronation Stone in Westminster Abbey. The current monarch can trace her descent back to the very same Scotic or Irish-Milesian rulers. The stone was returned to Scotland in 1996 where it currently resides in Edinburgh Castle. However any future British monarch will still be crowned on this stone when it has been temporarily returned to Westminster Abbey. The Northumbrian rune stave Stan is esoterically linked to the stone. 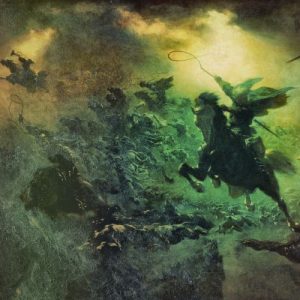 The Spear of Lugh
Lugh is cognate with the Germanic God Woden/Wotan/Odin and both possessed a sacred spear. In Germanic mythology this is called Gungnir and runes were engraved on the tip of the spear. This spear was both a practical magical weapon and also a symbol of the divine authority of both of these Gods. The Northumbrian rune stave Gar is esoterically linked to the spear. Gar is Old English and is cognate with the Old High German Ger, both having the meaning of `spear`. T.W. Rolleston in his Myths and Legends of the Celtic Race [1911] also draws a link to the Hammer of Thor and to the lightening weapon of the Aryo-Indian Thunder God Indra which is suggestive of a common Indo-European magico-cultural inheritance. It also suggests an association with the swastika which is also called the Hammer of Thor.

The Cauldron of the Dagda
The cauldron was a talisman of abundance and regeneration and also appears in the Welsh myth of Bran the Blessed and in the works of the Welsh Bard Taliesin. Not only could the Cauldron feed a host of men but the bodies of fallen warriors immersed inside it would be regenerated but the said regenerated bodies lacked the power of speech. Cauldrons feature prominently in Celtic myth and I am reminded of the famous Gundestrup Cauldron found in 1891 in a peat bog in Denmark. It is thought to date to the 1st century BCE which would place it within the late La Tene Iron Age period. The mythical and religious figures that feature upon the sides of the cauldron support the view of the Cauldron being an object of regeneration and/or sacrifice. It is likely that the Cauldron is the original `Holy Grail` and it is interesting that the extant Arthurian literature usually portrays the Grail also as an object of abundance and regeneration. This sacred object is linked esoterically with the Northumbrian rune stave Calc which is a rune of transformation, a key attribute of the `Holy Grail`.