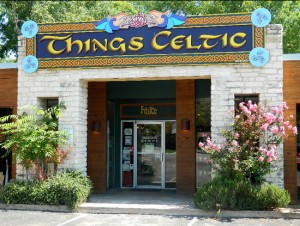 Deep in the heart of the Lone Star State sits the little Celtic store that could. Things Celtic has been a fixture in Austin, Texas since 1997. Recently we spoke with owner Lanora Davidson about the challenges and rewards of her vocation.

What is your own ethnic background/heritage?
I’m fifth generation Texan, my family has lived here for over a hundred years, in Texas that’s a big deal. The paternal side of my family is Scottish, Davidson & Boyd. One of my great-grandmothers was born on the Isle of Man. My ancestors have including ranchers, bankers, rough necks, teachers, preachers and even a politician.

When did you become interested in Celtic culture?
I always loved reading historical novels, so I grew up with romantic notions of the British Isles. When I was 18 I realized I wasn’t ready for college, so I sold my books and bought a one way ticket to London. I spent 3 months travelling through England and Scotland, I even stopped over to the Isle of Man and Ireland. The next year I applied for a student work permit and fell in love with a man who had been born in Scotland and grew up in Ireland.

What inspired you to get involved with the business?
As we approached our 40s we began expressing an artistic side. I was making jewelry featuring Celtic beads; my husband was carving stone with Celtic and Pictish motifs.  This was in the late 1990s and when we began selling at festivals we realized there was a huge demand and no products available locally. In 1997 we began importing a few pieces of jewelry from Ireland; by 1999 we gave up the day jobs and opened Things Celtic as a store.

What are the challenges of the profession?
The biggest challenge of was giving up the stability of a safe day job. When we opened the store I had been working for the University of Texas for 17 years; if I had kept that job I would have been eligible for full retirement benefits by now!

What are the rewards?
TRAVEL! I get to go to Ireland and/or Scotland where I meet creative people, artists, weavers, jewelers and musicians, to name a few. My customers are wonderful and I never get tired of hearing “I love this store, I want EVERYTHING!” I love having my boys involved in the store whether it’s selling kilts or changing light bulbs.

What are your core products and services?
I’d say about 40% of our sales are jewelry; we work with about a dozen different jewelers producing everything from pewter beads to diamond wedding rings. Another 40% is clothing, mostly kilts and kilt accessories as well as our own line of t-shirts. During the cooler months we sell ruanas and scarves. Then we have art, books, family heritage products and we’ve recently started selling more food items.

How are you different from your competition?
First off is there isn’t a lot of competition here in Texas, there’s a little Scottish store up in Salado, and a little Irish Store down near San Antonio. My store has the largest selection of products and by focusing on Celtic we carry Irish and Scottish as well as Welsh.  I don’t divide the store into the “Scottish” section & the “Irish” section. I have the jewelry selection and the clothing area. If customers want something Scottish or Irish, we take the time to show them around and point out things they might be interested in.

Who are your clients?
I’d say about two thirds of my customers are locals and one third are visitors from out of town. Because I have the only store of its kind in Texas, folks drive in from Dallas or Houston on regular basis. We also advertise in the hotels to bring in tourists who may never have seen a Celtic store.

What are your short, mid and long term goals for the business?
Right now I’m looking at promoting the new Texas Lone Star Tartan. I’ve been working with House of Edgar in Scotland for the past 6 months and now that the products are arriving I need to reach customers. In January I’ll be going back to Dublin & Glasgow for the trade shows and I have a busy festival season planned for 2013. I’ve seen an upturn in sales this year and I’m looking forward to developing new products for our Texas Celts. As my boys have gotten older and gone off to college I was thinking about changing careers. When I made a list of what my new ideal job would be I realized running this store has everything I could possibly want. I get to travel, I get to meet new people, I get to buy beautiful things, I get to dress however I like. My staff has been amazing and it really feels like family. I even have a cat on my desk.

How else are you involved with Celtic culture in your community?
Things Celtic serves as an informal resource for anything Celtic in Central Texas. We host song sessions, the Gaelic League, CD release parties, book signings and storytelling.  We sponsor the Highland games for the Austin Celtic Festival as well as the Wassail at Yule. We have a lovely little outdoor garden behind the store and we built a stage where musicians are welcome to meet and anyone can approach us with an idea for a gathering and we’ll help make it happen.

What are your thoughts on the state of Celtic culture today?
The last few years have been a bit rough. When Things Celtic opened in 1999 we were riding high on the backs of River Dance, Rob Roy and Braveheart. I heard people saying they weren’t Celtic, but they wanted to be. They loved the music and the art and wanted to bring it into their lives. I think the love is still there, but it’s a bit quieter. Perhaps it’s more like an old river running deeper and slower, no longer needing to rush.

What can we be doing better to preserve and promote Celtic culture?
Don’t try to lock the culture in a museum. Cultures have to change and evolve; they have to grow and breathe to survive. “Trad” is wonderful, but we need to embrace the new artists and new music that stretches the boundaries.  Take the old and make it new again. At Things Celtic I love to offer jewelry and fashion that take a new spin on the knotwork, the spirals, the thistles and the claddaghs. The contemporary kilts, Nation Kilt is my favorite, that have pockets and encourage daily wear rather than just special occasion are a perfect example of bringing old traditions up to date.It isn t just about being new and trendy; what I’m seeing at Things Celtic is people who incorporate Celtic aspects into their gifts, their homes and their lives in many subtle ways.  It’s not blinking green shamrocks once a year, it’s about embracing history and culture and making it part of your family.