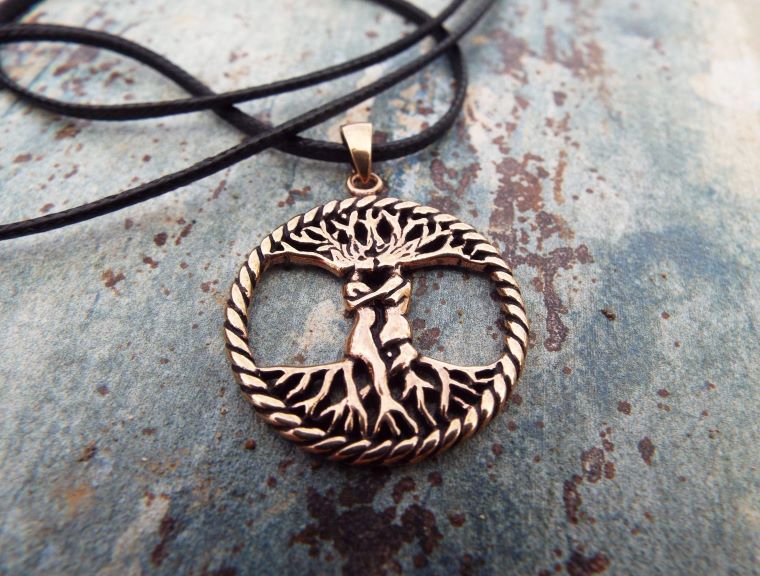 Sarah Nagle believes there’s a significant difference between incorporating the trinity knot into a jewelry line and really being focused on Celtic jewelry.

Her California-based casting company – Nagle Forge & Foundry – grew out of a family history of metalwork. Nagle grew up in the business, which has been putting its emphasis on Celtic designs for almost 20 years.

“The market was there,” she explains over the phone from Novato. “We responded to requests, basically. People wanted a better, bigger plaid brooch.”

The company produced its first plaid brooch (or kilt pin) in 1993. These days, they make brooches in more than two-hundred styles.
“If a man goes out and orders a kilt, he usually has the option of about 600 different tartans,” notes Nagle. “Most companies that make accessories for the kilts have four belt buckle options, and maybe six plaid brooch options.”

There is a demand for more choices and better quality, even if it comes with a larger price tag. 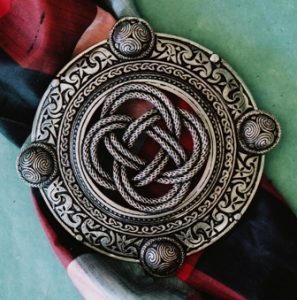 The company makes more than brooches, however: earrings, cufflinks and rings are also part of the spread, with many of the styles inspired by historic designs.

The process of creating the pieces can vary depending on the metals involved. A mould must be created first. Then, the piece is cast – and it often has to be put together as well, as brooches can be fabricated from as many as seven components.

Nagle muses that working in the shop allows for a better perspective on the possibilities and limitations of design.

“A lot of people, they come up with a design and they put it on paper and then they figure out a way to make it.”

For Keith Jack, the ideas always come out on paper.

“I see it first three-dimensionally, in my head, and then I draw it,” says the Scottish jeweler, whose business is based in Vancouver. “Once I’ve got the dimensions right, then we will go to wax modelling after that.”

Jack has been designing jewelry for over 15 years, and he currently has dozens of different collections on his website: tree of life, labyrinth and Norse forge are just a few of the themes on display. However, as someone who sets out to make “art that you can wear,” he is picky about which pieces make the final cut.

“Personally, if I am looking at something, I’ve got to really love it before I release it and put it into my line. If I don’t love it, it doesn’t even go there. It sits in my many drawers of stuff that doesn’t make it.”

Like Nagle, Jack saw a demand for high-end products within the niche market of Celtic jewelry. His work is made from silver, gold, or both, but he doesn’t use gold plating.

“We tend to use separate castings,” he explains. “We will cast a piece of silver and then we’ll cast a separate piece of gold – or maybe several pieces of gold – and attach that to the silver as solid gold pieces.”

Over in Wales, Annie Wealleans of Black Dragon Crafts approaches her jewelry a little differently. She considers herself more of a “beadsmith” than a jeweler.

“The first versions were made of partly recycled plastic, plated with a layer of silver,” she shares via e-mail. “They’ve come a long way since the early days.”

Wealleans eventually found a man to cast her bead designs in pewter, but once he retired, he sold her the equipment and taught her to use it.

There are two aspects to Wealleans’ business: selling the jewelry made from the beads, and selling the beads themselves. She reflects on “the challenge of creating the perfect Celtic knot,” adding that no one else seemed to be putting that kind of design on beads when she first began. 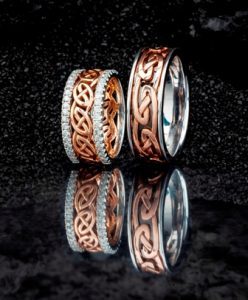 “For me, the knots are some kind of symbol of eternity and illustrate the grand interconnectedness of all things. Like the wheel of life, it goes around and comes around.”

Symbols are a large aspect of Celtic jewelry – whether it’s a trinity charm or something more intricate.

“Any real meaning that people give is only an opinion,” he says, “so we have to make up a lot of our own stories.”

As for a trinity knot, or triskele, it could be representative of the three stages of life.

“In a woman, that would be maiden, mother and wise-woman,” says Jack, noting that these stories help a consumer identify with a piece of jewelry.

On the other hand, we do know the meaning of the Claddagh symbol, as it is only a few centuries old. Its namesake is a place called Claddagh in the city of Galway, Ireland.

“It’s a very Irish symbol, but people all over the world know what it is and they really like it,” says Jack. “The hands represent friendship, the heart represents love and the crown represents loyalty.”

While crosses, knots and the Claddagh are staple Celtic symbols, many jewellers are branching out.

Aosdàna, for instance, offers pieces largely inspired by Iona, an island off the coast of Scotland. Creative director Mhairi Killin has family roots there, and it’s where she now lives and works. Alexander and Euphemia Ritchie owned the Iona Celtic Art shop almost 100 years ago. Killin’s relative, silversmith lain MacCormick, became the Ritchies’ successor and, later, passed his knowledge of Celtic patterns to Killin. She started Aosdàna in 2003.

“All the traditional designs are from the original Ritchie patterns,” she shares. “Their inspiration came from The Book of Kells – the complex patterns of interlacements and foliage and animals.”

The Ritchies were also inspired by the medieval stone carvings on Iona, and other aspects of the small island itself.

Although the internet marketplace is difficult at times, Killin feels the cultural heritage behind the work gives it authenticity. In addition, people are drawn to its story. These ancient designs, Killin says, attract just about anyone.

“The traditional pieces will sell to all age groups.” 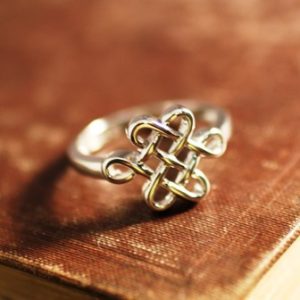 However, Killin emphasized that Aosdàna is “not just churning out the past.” Cufflinks or charms made from beach stones – collected from the shores of St.

Columba’s Bay – allow people to take a piece of the island with them. A bespoke bangle depicts a pattern by Hannah Louise Lamb, reflecting the shape of Iona’s coastline.

“We’re very much keeping the tradition alive and working with designers to create new designs that reflect Iona today,” she says. “In that way, we are supporting Scottish designers as well.”

Killin also feels the appeal of Celtic jewelry is “enduring.”

“It is almost beyond fashion.”