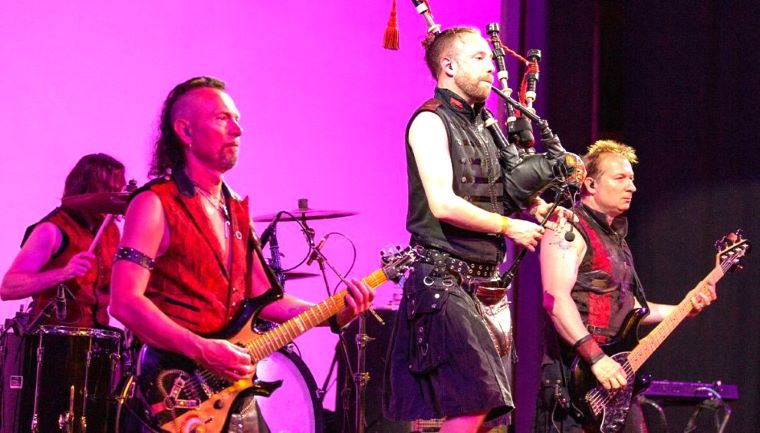 Believe it or not, the bagpipes have played a large role in the history in rock ‘n’ roll.

‘It’s a Long Way to the Top (If You Wanna Rock ’n’ Roll)’ by AC/DC
Nothing else could, or should, top this list of the Top 10 Rock ‘n’ Roll Bagpipe Songs. The story goes that producer George Young heard that the Scottish-born Bon Scott had been in a pipe band when he was younger and thought he could play bagpipes on the track. But Scott was a side drummer in the group and had never laid a finger on the pipes. Still, he managed to produce what you hear on ‘It’s a Long Way to the Top,’ including an extended solo in the middle and a call-and-response section with Angus Young’s guitar. After Scott’s death, Brian Johnson refused to sing the song with AC/DC. Is that out of respect for Scott or because he’s afraid of the bagpipes? Either way, fair enough.

‘Mull of Kintyre’ by Paul McCartney & Wings
The former Beatle pays tribute to the Scottish Kintyre peninsula – home to a farm estate he’s owned since 1966 — in this massive U.K. hit. McCartney enlisted local help for the folksy ballad in the form of bagpipers from Kintyre’s Campbelltown Pipe Band. Following its 1977 release, the Scottish paean sold more than two million copies in the U.K. to become Britain’s bestselling single ever (eclipsing the Beatles’ ‘She Loves You’). It’s still the bestselling non-charity single in the country’s history.

‘Celtic Ray’ by Van Morrison
The Northern Irish singer pays tribute to his Celtic heritage on the opening track of 1982’s ‘Beautiful Vision.’ And to Irish up his coffee, Van the Man adds some wistful uilleann bagpipes. Like memories of times gone by, the pipes waver in and out of focus throughout the tune. Morrison later recorded the song with the monsters of Irish folk, the Chieftains.

‘Sky Pilot’ by Eric Burdon & the Animals
The seven-minute album version of Eric Burdon’s antiwar epic showcases the Animals frontman at his most experimental. Following the opening verse and chorus, a guitar solo fades into sound effects of fighter planes and explosions, eventually leading to the distinctive bray of bagpipes. The music comes from a secret recording Burdon made of the Royal Scots Dragoon Guards playing ‘All the Bluebonnets Are Over the Border.’ Rumor has it that the uncleared usage earned him a nasty letter from U.K. royalty. Some people will do anything for bagpipes. 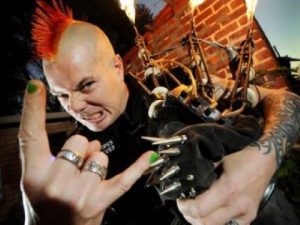 ‘Anthem’ by The Sensational Alex Harvey Band
Scottish rocker Alex Harvey tapped not one but two bagpipers from the London Scottish TA Regiment to assist on the appropriately titled ‘Anthem.’ The pipes, in lockstep with an ethereal chorus of vocalists, bring the song’s martial coda to a soaring conclusion.

‘Hair of the Dog’ (live) by Nazareth
This is an important distinction: The original studio version of this cowbell classic doesn’t include bagpipes. But in concert, frontman Dan McCafferty performs the song’s talkbox solo with help from bagpipes. The singer has said that the transformation came about as a goofy way to pay tribute to the band’s homeland of Scotland.

‘Tomorrow’ by U2
‘Tomorrow’ — the centerpiece of U2’s second album, which tackles heavy topics like faith and God — includes some religious elements, but it’s mostly about the death of Bono’s mother, who died when he was young. The uilleann pipes (Ireland’s national bagpipes) lend the early part of the track a misty, funerary tone, which eventually bursts into a furiously rocking finale.

‘The Silent Boatman’ by Parliament
Top 10 Rock ‘n’ Roll Bagpipe Songs? George Clinton’s Parliament? No, we’re still not kidding. Bagpipes take the spotlight for two stretches in this psychedelic-soul-folk-rock ballad, which closes the group’s debut album. The instrument’s presence is most likely due to the influence of Ruth Copeland, a British musician who wrote the song and co-produced ‘Osmium’ with Clinton.

‘Are You Ready to Rock’ by Wizzard
Following his work with the Move and Electric Light Orchestra, Roy Wood formed the glam band Wizzard, whose performances seemed to include every crazy idea its founder ever hatched: warpaint, costumes, puppets, dancing gorillas, roller-skating angels, cats and dogs living together, mass hysteria. The group’s music had a similar everything-but-the-kitchen-sink approach, including multiple drummers, horns, strings and bagpipes – which close out this 1974 single, a Top 10 hit in Britain and Ireland.

‘Come Talk to Me’ by Peter Gabriel
Gabriel’s ‘Us’ album begins with the distinctive squeal of bagpipes, which slice their way through the mechanical beat that keeps ‘Come Talk to Me’ lurching forward. The pipes aren’t the only Gaelic flavor added to the song: Sinead O’Connor provides backing vocals.