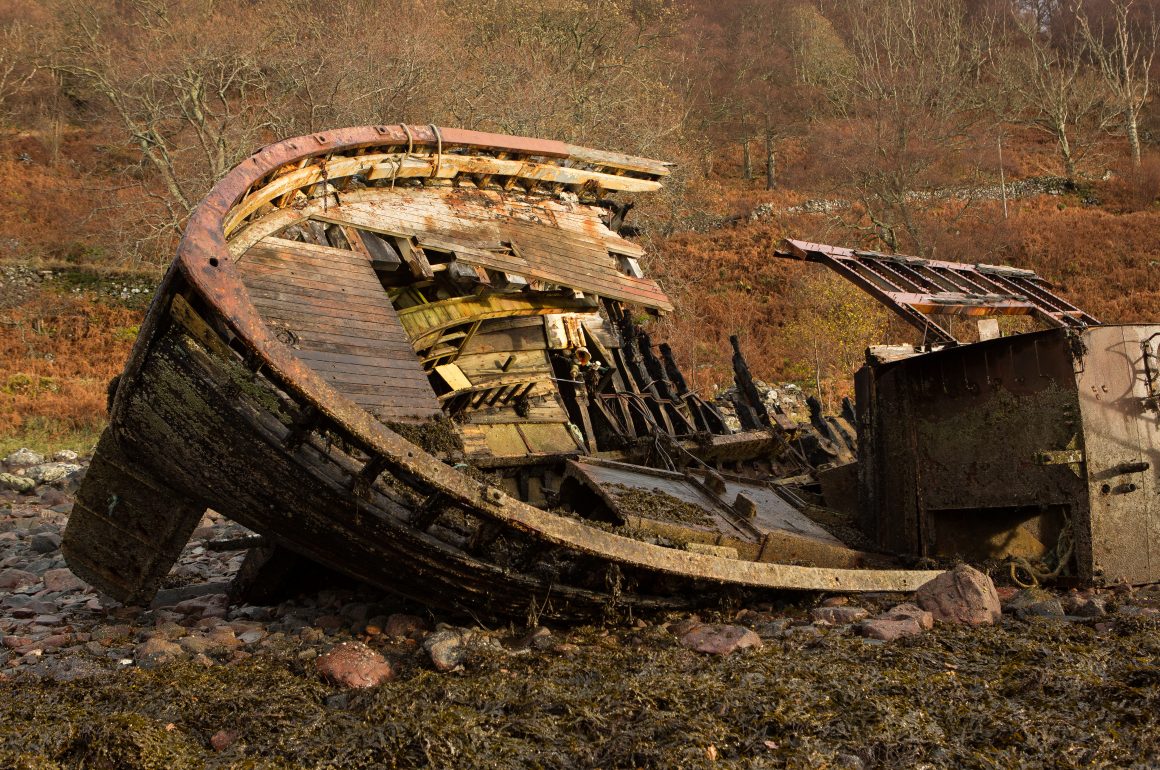 The village of Torridon – with its backdrop of towering mountains – lay at the foot of Glen Torridon, running from Kinlochewe to Upper Loch Torridon in Scotland’s Wester Ross. The village derives its name from the 16,000-acre Torridon Estate within which it lies. In more general terms, the name Torridon applies to the area around Upper Loch Torridon, stretching east to Kinlochewe and west to Loch Shieldaig, and still further to Loch Torridon. It is one of the most dramatic landscapes in the whole of the United Kingdom. The mountain ranges of Beinn Eighe, Liathach, and Beinn Alligin to the north of Glen Torridon – along with the mountains of the Coulin Estate to the south – are among the oldest rock formations in Europe, and boast no fewer than nine Munros. These peaks – and their majestic mountain slopes with gorges and waterfalls plunging into the valleys, rivers and lochs below – render this place wild, rugged and dramatic. Torridon may be off the beaten track, but it is this remoteness – along with its geological grandeur – that renders it one of the most impressive, unspoiled and stunningly beautiful places in the Scottish Highlands. 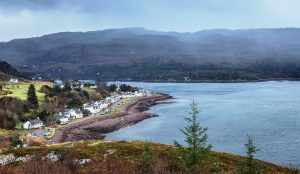 In summer the climate is milder, roads get busy, and somehow the edges of wild places get smoothed. I wanted to experience Torridon in winter, and so it was on a dark December afternoon that I ventured into Glen Torridon, skirting the National Nature Reserve of Beinn Eighe at Kinlochewe. After ten miles (16km) the single-track road discharged me along the southern side of the loch towards the village of Shieldaig on the Applecross peninsula. Tigh en Leigh – a self-catering house on the edge of Loch Shieldaig – was to be my home for the next few days.

The location was picturesque, and the views stunning.

The following morning I walked the length of the village as it wrapped its way along the shoreline. Shieldaig’s name is derived from the Old Norse ‘Sild-vik’ – meaning ‘herring bay’ – but the village owes its existence to more recent times; in the early 1800s, Admiralty-assisted families willing to move to the area to pursue fishing for a living were given grants for boat and house building. There was, however, an ulterior motive; the Admiralty saw an opportunity to establish a community of strong, skilled sailors that could be used if necessary during the Napoleonic Wars. Fortunately, Napoleon’s defeat at Waterloo meant that these settlers were never called to arms, and Shieldaig continued to develop as a fishing community. Commercial herring fishing in these waters has long gone, though creel fishing for langoustines still supports a small number of remaining fishermen. The catches are sold mostly to Spain to satisfy the Spanish demand for quality seafood. It is an important source of income for a fragile Highland economy.

Creel fishing from small boats is a hard and often lonely existence. The waters here can be cruel, and there was sadness in the air during my visit as a local fisherman had been lost at sea the previous week.

Located just a few hundred meters offshore lay Shieldaig Island – owned by the National Trust for Scotland. Its covering of Scots Pine trees is believed to have been imported from Speyside over a century ago to provide a source of wood for the poles used to support fishing nets. The island is a SSSI (Site of Special Scientific Interest) and has become an important wildlife haven. Over several days I saw seals, otters, heron, kestrels, and mergansers. Even more exciting were the white-tailed eagles that have set up home on the island, and I observed three of these magnificent birds soaring above the trees. One even swooped on the shoreline grabbing its lunch no more than 75 yards (70m) from me! 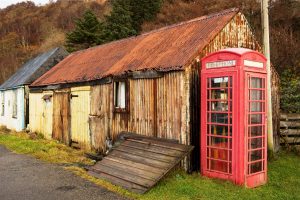 Loch Shieldaig is the starting point for Torridon’s annual Celtman event, the Extreme Scottish Triathlon. And extreme it is! Celtman attracts over 1,000 competitors, representing over 50 nations. The race begins with a 2.1-mile (3.4km) swim in the open waters of the loch. It used to be 2.4 miles (3.8km) but it was shortened after competitors struggled with water temperatures of 50 – 55 degrees Fahrenheit (10 – 13 degrees Celsius)! The second stage of the race is a 125-mile (202km) cycle on Highland roads, with ascents of over 6,550 feet (2000m). The final stage of the event is a 26-mile (42km) run, encompassing two Munros above Glen Torridon, before heading down to the finish line in the village of Torridon. As if all of that wasn’t hard enough you have to factor in the vagaries of Scottish weather and the impact of the dreaded midge! As a disclaimer in the race manual states – “Celtman isn’t for Softies!”

Torridon may be a paradise for those who love the wild outdoors, but you don’t have to take it to the extreme.

There are many leisurely walking routes, and I took one of these to explore the shores of the loch away from the village. This area was affected badly by the Highland Clearances, and many of the bays around the loch contain the remains of old stone cottages and the crumbling ruins of long-forgotten communities. I scrambled down a steep embankment to sit on the stone windowsill of an old ruin. The water was choppy and the wind cold. When these houses were occupied there were no roads over this rugged landscape; the sole means of travel were small fishing boats plying the waters for food. This is a harsh environment, and I became all too aware of the fragility of life on the edge.

I called in at The Torridon Hotel and met with Ross Aitchison, the facilty’s Operations Manager. Originally constructed as a Victorian shooting lodge, The Torridon first opened its doors in 1887. Sitting in the drawing room with the ornate, ribbed ceiling – adorned with symbols of the zodiac looking down on us -Aitchison gazed out over the loch towards the village of Torridon and the mountains beyond. “The location and scenery are stunning,” he noted. “At The Torridon we aim to cater for a broad spectrum of visitors and their needs. In the main hotel we provide a luxury experience with 18 bedrooms and fine dining including a whisky bar stocked with over 350 malts.”

The hotel also operates the adjacent Torridon Inn, offering quality pub food and a further 12 bedrooms. There is also a self-catering boathouse on the edge of the loch, and plans for further expansion are in the pipeline. The downside to such a remote location is that trade is largely condensed into 7 months of the year but, as Aitchison notes, things are changing. “Inverness airport is now running regular flights to and from Amsterdam’s Schiphol Airport. As Schiphol is a large hub for the wider world, we are experiencing an increase in foreign visitors coming to the Highlands by air.”

As well, the hotel participates in the annual Torridon Mountain and Sea Festival. This festival showcases everything that is unique about this place, providing visitors ample opportunity to explore mountains, sail the seas, watch the wildlife, photograph the landscape, and sample locally sourced food and fine ales.

Other visitors to The Torridon include competitors and their support crews during the Celtman event, as well as motoring enthusiasts driving Scotland’s North Coast 500. This 500-mile (805km) route – dubbed Scotland’s Route 66 – starts in Inverness, heads west to the coast before turning north to follow the coastline around the top of Scotland and back to Inverness. It encompasses some of the most stunning scenery the country has to offer, along with a plethora of historic sites and interesting places. The Applecross peninsula and Glen Torridon form part of the westerly section of the route, and contribute in no small way to that experience.

With the weather closing in I headed back to Shieldaig, tuning in to the forecast en-route. Storm Caroline was headed for the west coast, bringing in 70mph winds, followed by heavy snow and a hard freeze. I would have loved to stay and photograph this landscape in the depths of winter, but discretion being the better part of valour, I headed back through Glen Torridon as the first flurries of snow drifted across the landscape. This was Scotland at its best; dramatic, beautiful and wild. ~ Tom Langlands