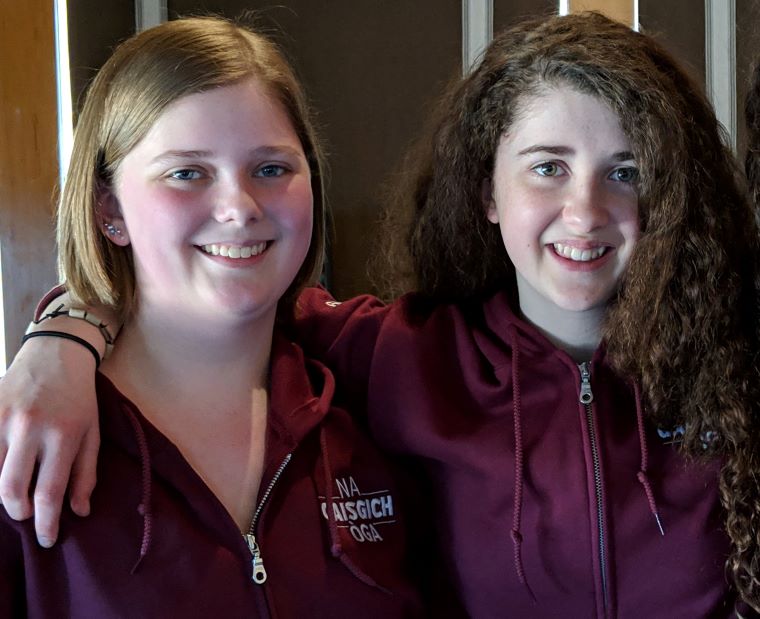 When Abby and Ella Hanson sat down with Celtic Life International it was the start of Gaelic Nova Scotia Month and the siblings had just wrapped up a presentation at the Halifax Central Library.

Although young (Abby 16, Ella 14), the sisters are having an important impact on Gaelic education in their home province. As the founders of Up With Gaelic, the pair visit schools around mainland Nova Scotia, promoting the preservation of Scottish Gaelic culture and tradition.

“Both our parents are in the education system,” says Abby. “We had heard a lot about how Gaelic culture was on the social studies curriculum in grade schools, but there were almost no resources to actually teach it. So, with the help of our mom and what we had learned from our Gaelic teachers, we put the presentation together.”

At first, one of the biggest challenges was getting people to take them seriously.

“A couple of times in the beginning we would go into classes and people would say, ‘Oh, we didn’t think you would actually be students,’” shares Abby. “They were expecting adults.” 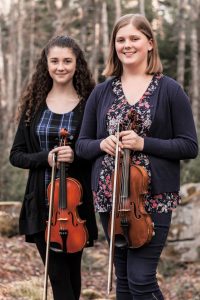 Abby and Ella’s maternal great-great grandmother only spoke Gaelic when she first emigrated to Nova Scotia. As the language was frowned upon at the time, Gaels were discouraged from speaking their mother tongue outside of their own homes. Over time, led to a loss of the language in Gaelic households, including that of Abby and Ella’s family. However, the pair are now working their way back to Gaelic fluency – and their mother has started learning, too. Up With Gaelic is their chance to share their studies.

The duo balance their own schoolwork with their elementary school visits. They started off with 30-minute presentations, but soon bumped them up to an hour after realizing that they needed more time to cover everything properly. Though the sessions vary slightly depending on the students’ ages, the core is always the same: Gaelic culture in Nova Scotia. The teens take their audiences from the Gaels’ lifestyle in Scotland – residing in blackhouses, spinning wool and caring for cattle – to their journey to Canada. They bring interactive elements to the classroom as well, including a milling song.

The sisters weren’t always as enthusiastic about learning Gaelic as they are now, but they started participating in Na Gaisgich Òga (a Gaelic mentorship program for youth) run by the Gaelic College in St. Ann’s, Cape Breton five years ago. Already violinists (soon to be fiddlers), they were drawn by the musical side of the culture.

“I really liked learning the singing,” smiles Abby. “I had a faint idea that it was part of my family heritage – that my ancestors had spoken Gaelic – and I slowly became more interested as I went along and started taking more classes.”

For Ella, it wasn’t until the second year of participating in the Caidreamh na Cloinneadh (Summer Youth Gaelic Immersion program) that she became invested in learning to speak Gaelic.

“I really enjoyed learning the language and figuring it out. Like with friends, I got to speak with them in Gaelic and they got to speak back, which is pretty cool.”

“We did it as well this past year. It was also fun because I could completely understand what everyone was saying, and I could hold a conversation- which was really neat and special because I was speaking the language of my ancestors.”

Ella has also taken to step-dancing, which she happily demonstrates during the Up With Gaelic presentations.

Although neither of the girls have immediate goals of teaching Gaelic full-time, they want to continue sharing the culture with young students for as long as they can. Based on their experience, they believe that young people today are still interested in learning about Gaelic culture.

“We went to the Gaelic College one year and one of the organizers said, ‘We had a family here last week and they came because their daughter had heard about it through your presentation,’” recalls Abby. “That was so amazing that they had remembered it for that long.”

Abby and Ella say that, if they have children of their own, they will be happy to pass the language along to them.

“Just look around,” says Ella. “Gaelic might not be an active part of our everyday culture, but it is still a huge part of our life.”