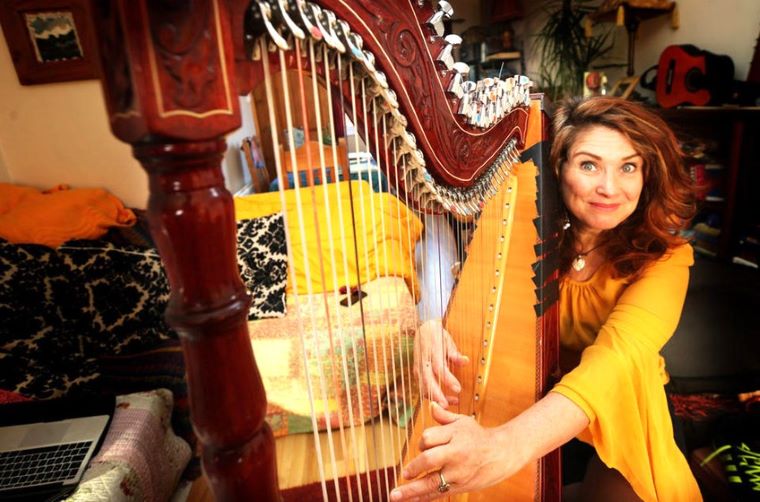 When you think of a harpist, you probably picture an angelic figure, seated gracefully next to an ornate, gilded instrument, plucking sonic ambrosia out of the chords.

One long-time harpist from Belfast has spent her entire musical career trying to change that image and remind listeners that a harp – like a sharp wit – can be dangerous, too.

Ursula Burns grew up around music. However, rather than follow in the footsteps of her forebears, she was more inclined to buck tradition.

“Musically, my mum’s family were folk musicians,” explains Burns via email. “My mum had a love for the poetry of W.B. Yeats and made an album in the 1980s of his work set to music. I spent my childhood steeped in music and poetry and began performing folk music with my mum at a very early age. We performed at medieval banquets and folk clubs.

“I was not interested in learning classical or folk,” she continues. “I failed my grade one music, and never even had a harp lesson. I was 25 before I started playing harp. I wanted to bring my own style of playing, which evolved to be a hybrid between Celtic and Paraguayan, with a focus on self-expression.”

Her father was an entertainer too, and his influence would help guide her acoustic approach.

“My dad was very comedic and a natural emcee. I inherited the music from my mum, and the comedy from my dad.”

Burns also showed an early proclivity towards song writing, creating her own odd ditties on a piano left to her by an elderly neighbour. Today, she incorporates all three – harp, song writing, and comedy – into her career as The Dangerous Harpist.

“When I was 25, I became self-employed in music and my relationship to music changed. When you are earning a living, it is harder to do it for pleasure. I enjoy my work. I love my work, and I keep it diverse to keep it spicy. 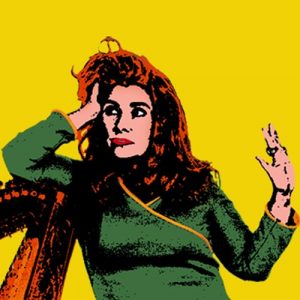 “I am an entertainer,” she continues, “and all my income is live, so it is not just about the musical quality. To play comedy on the harp, I needed to master the harp. And yet, ‘quality’ harping is not my aim. Connection with the audience is.”

A stirrer of many pots, Burns has dabbled in the quirkier realms of performance art, including theatre and even circus, often while juggling her role as a mother – all with the uncertainty of how to make ends meet as a self-made harpist. But that sits fine with her. As she puts it, music runs red through her veins.

“I don’t know how else to exist. I keep finding new ways to do what I do, and the road finds itself and propels me forward. Music is about passion. I do anything to keep it interesting because if it ever gets ordinary, it will be time to quit.”

Burns has had many proud, peak moments in her career.

“That time – pre-Internet – Jimmy Nail heard me on Women’s Hour, and it took him six weeks to find me,” she begins to recount. “He asked me to come on a 50-date On the Boards tour, playing to 3,000 people a night and ending in the Albert Hall.

“Winning the Irish Comedy Award in 2012,” she continues, running down her mental checklist. “Getting lost in the composing of children’s theatre, Snail and the Whale and Little Red. All the festivals and gigs – from big tops to little tops. Palladiums to Pandoriums. Flea Pits to Gypsy Wagons, and horseboxes to the Glider. I don’t know where to stop. A lot of things happened.”

By all accounts, a lot of things are yet to happen still. Just for 2022 alone, Burns has a few novel ideas set to launch.

“I am working on a new show, supported by the Arts Council of Northern Ireland; an audible, theatrical, surrealist, and fantastical version of Beauty and the Beast, entitled ‘The Blue Rose.  Also, last year, I bought a truck, and Paddy Bloomer built me a mobile venue. It is called Harpula’s Pandorium. I am a trucker now! A trucking harpist. I shall truck to places that invite me and play harp.”

And whether that harp is a Brobdingnagian cacophony, or played with plucky aplomb, Burns gets why the harp resonates with her audience.

“The harp is iconic. It is annoyingly beautiful and nice. I tried for years to make it edgy, to knock the poshness out of it. It is so hard to do. Whatever angle you come from; the harp is always beautiful. And, though, it does not rock, people still love it.”