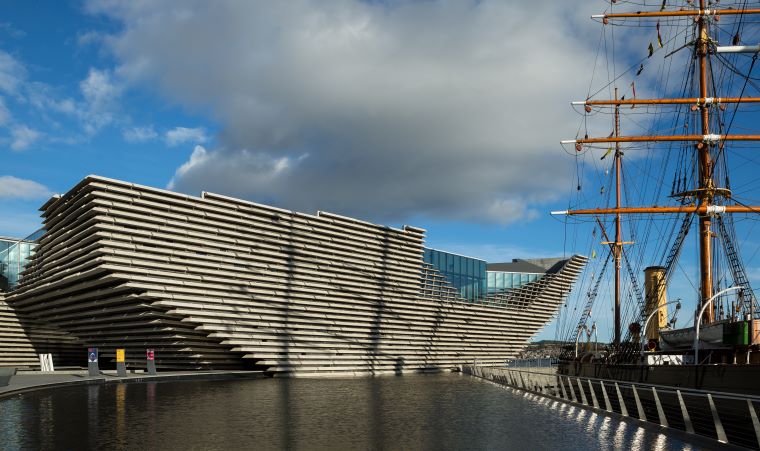 The Victoria and Albert Museum, London – known simply as the V&A – is the world’s leading museum dedicated to art, design and performance. It owes its genesis to the Great Exhibition of 1851, when the first-ever international exhibition of manufactured items was held in a temporary glass and steel ‘Crystal Palace’ in Hyde Park. From this evolved the Museum of Manufactures and the subsequent South Kensington Museum – later renamed the Victoria and Albert Museum. The building underwent many changes over the following century and although its galleries embrace exhibits from across the globe, the V&A London has always remained the only V&A museum in the world – until now that is.

V&A Dundee opened its doors in September 2018. It is Scotland’s first design museum, and the only V&A outside of London. While visitors flock to see the stunning building and its exhibits, the opening of V&A Dundee embodied a symbolism that goes far beyond the usual hype associated with the launch of a new museum; it heralded the rebirth of a city. Designed by acclaimed Japanese architect Kengo Kuma, this cliff-like edifice – with its stratified, exterior cladding rising over the River Tay – not only provides the perfect backdrop for Captain Scott’s RSS Discovery (which is moored alongside), but also reunites the City of Discovery with the river that was once its lifeblood.

Dundee grew from a small settlement on the River Tay to a major whaling and ship-building port. It was the discovery in the early 19th century that treating jute fibres with whale oil made them pliable enough to spin that changed the fortunes of the city – thus earning it the name ‘Juteopolis’. Between 1820 and 1900 Dundee’s population grew from 38,000 to 190,000 inhabitants and, by 1911, 40 per cent of the working population was employed in the jute industry. 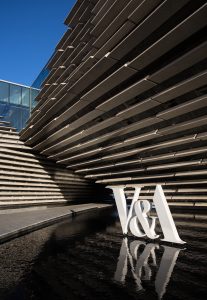 But by the 1930s things were changing. Jute products could be made cheaper in India, and synthetic fibres were flooding the market. During the latter part of the 20th century the last of the jute mills closed, unemployment rose, social deprivation increased and, perhaps unsurprisingly, a major drug problem surfaced. But, like the mythical phoenix, something very exciting was rising from the ashes.

Dundee is an innovative city, and perhaps it was the challenges of responding to rapid industrialisation, along with the problems of disease caused by a large population housed in insanitary conditions, that led it to explore creative solutions. Mill owners invented their own machines. At Dundee Royal Infirmary, Dr. Thomas John MacLagan experimented with salicin, his research paving the way for the manufacture of aspirin.

From such beginnings Dundee developed rapidly in the fields of art, technology and medicine.

Today, the University of Dundee School of Life Sciences leads the world in many aspects of medical research, paving the way for the creation of hundreds of new cancer treatments. In 1982, Clive Sinclair launched his home computer – the ZX Spectrum – and it was later assembled at Dundee’s Timex factory. With ready access to locally-built home computers a generation of programmers was born, and from this would emerge the world’s first computer games degree course at Dundee’s Abertay University; games such as Lemmings and Grand Theft Auto originated in Dundee. Dundee is also home to Duncan of Jordanstone College of Art, now a school within the University of Dundee. This faculty – rated first in Scotland for art and design – offers degree courses across many facets of the arts including Architecture, Digital Interaction Design, and Product Design. It was the University of Dundee that donated land for the construction of Dundee Repertory Theatre – now home to the only full-time company of actors in Scotland as well as the Scottish Dance Theatre. Along with the city’s McManus Art Gallery and Museum, the opening of Dundee Contemporary Arts in 1999 furthered the city’s dedication to culture with two galleries, a cinema, and a Visual Research Centre affiliated with Duncan of Jordanstone College of Art and Design.

It was against this background of creativity – and a master-plan for a £1 billion pound redevelopment of Dundee City Waterfront – that Dundee approached V&A London to explore options for celebrating and promoting the very best of Scottish design, some of which was exemplified in Dundee’s track record of recent years. The V&A embraced the project, and in January 2010 an international architectural competition for a new building for V&A Dundee was announced. It was a daunting challenge requiring an innovative solution. It had to be a work of inspirational architecture, while its location on the waterfront presented an opportunity to reflect upon Dundee’s maritime history and to reconnect the city to the River Tay. Six designs were shortlisted from an initial submission of one hundred and twenty. Following public consultation, it was announced in November 2010 that Kengo Kuma & Associates had won the competition. Work started on site in 2015 and it took three and a half years to construct the project.

Drawing inspiration from the craggy cliffs of Scotland’s rugged north-east coastline, the building appears to float on water with more than a passing resemblance to the hull of a large boat, its prow jutting out into the River Tay. The complex geometry – akin to two twisted and inverted pyramids – creates a cave-like passageway at ground level through which the Tay Bridge and the river can be viewed from the city, while the projecting concrete bands and the twisted geometry generate interesting shadows that bring the building to life with the passage of the sun. With the entrance tucked below a huge cantilever there is the feeling of being drawn deep into the building’s interior by shafts 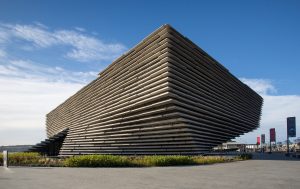 of light leaking from an inner cave hidden in the shadows. Upon entering, the internal atrium opens up into a stunning space where the craggy walls of the exterior are replaced with angled, wooden panels. Other walls are of polished white concrete mixed with sustainably sourced mussel shells, while the floor is buffed Irish limestone with the fossils of ancient plants and sea creatures visible on its surface. It is perhaps unsurprising that a Japanese architect has created such an interesting combination of natural and man-made elements, for in Japanese culture those distinctions are often blurred. Kuma described his intention to create “A living room for the city.” And although the building is big it does feel surprisingly homey.

The upper level of the building houses the Michelin Design Gallery, The Thomson Learning Centre, and 550 square metres of Scottish Design Galleries hosting nearly 300 exhibits that celebrate the best in Scottish design. This includes a full reconstruction of Charles Rennie Mackintosh’s Oak Room, designed for Miss Cranston’s Ingram Street tearooms in Glasgow that had been in storage for almost fifty years. Along with the Scottish Design Galleries, there is a further 1,1oo square meters of museum-standard, changeable exhibition space – the largest in Scotland. The inaugural exhibition – Ocean Liners: Speed and Style – is a fitting one, given Dundee’s maritime past. It is truly a stunning demonstration of what can be expected from the world’s leading design museum.

Sophie McKinlay, Director of Programme, is responsible for the exhibitions at V&A Dundee, “Dundee was built on trade and exchange, and I want the new museum to be a gate through which the city can once again access the world.

“Reflecting upon its past as a port city is a crucial part of rethinking Dundee’s future. V&A Dundee is a new opportunity for the city and the museum is poised to trade and exchange ideas globally.”

Dundee’s rise on the world stage has not gone unnoticed. The Wall Street Journal described it as ‘Scotland’s coolest city’, while travel experts Lonely Planet put it sixth in the top ten European destinations to visit in 2018. Dundee was also the first city in the U.K. to be granted City of Design status by UNESCO in 2014, placing it alongside the likes of Bilbao, Turin and Helsinki.

Cantilevering over the River Tay, and sitting alongside RSS Discovery, the V&A Dundee is more than a very important museum; it is a symbol that marks the moment when the City of Discovery rediscovered itself. ~ Story by Tom Langlands