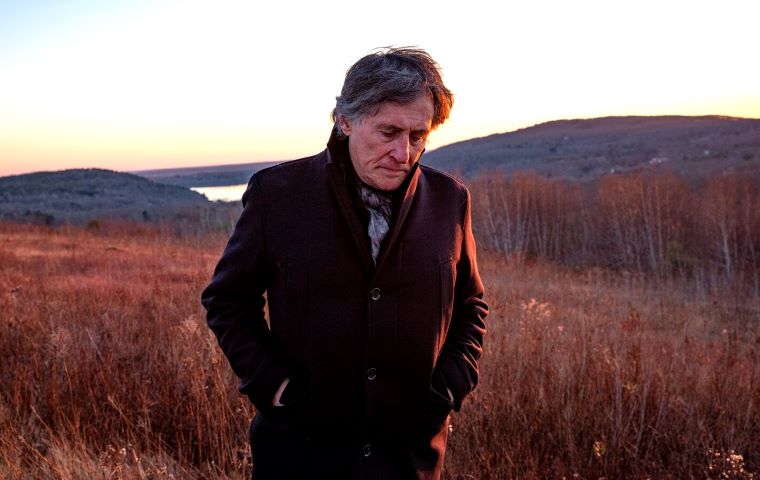 Walking with Ghosts is Gabriel Byrne’s recently published memoir of his life and work. It is told episodically, interweaving stories across time, revealing Byrne’s personality through encounters he has had throughout his life as well as in his stage and film career. The book is replete with dialogue from those encounters coupled with the reflections of the actor today, now in his seventies.

Byrne’s family is central to his narrative. His mother, a quiet strength and encouragement to him, raised six children and dealt with a husband who was fond of tipple (Guinness employees had a good supply at their elbow). Even so, in a deeper dive that is typical of this book, he describes a moment when his mother has had it with the demands of carrying the family—she intimates that she is leaving, before quickly changing her mind. Years later, as a famous actor, her son looks back and sees that she too may have had unrealised ambitions to act. Byrne portrays his father fondly in the book: the Da quips, after his son lands an early acting role, that he did not need to watch it, since he could see him for free any day of the week. Even today, television audiences of a certain vintage recall Byrne’s emergence in Irish public consciousness through his role on The Riordans, a television series in the 1970s. From the first, his talent was clear. Byrne manages to capture the interiority of a role and display profound sensitivity in his delivery.

Writing about his time as a teenager in a seminary in England, Byrne relates: “One evening, when I returned to study hall from dinner, I was told to go to the priest’s room…The priest opened the door in a red dressing gown”. You do not need to have read The Fern’s Report, or have seen Spotlight, to anticipate what happens next. Byrne already spoke about this incident on ‘Conversations with Eamon Dunphy’ on RTÉ Radio on 21 June 2008. Back then, however, he held back, referring to lines that were crossed. In Walking with Ghosts, he recounts what happened in full—to the extent that he can. While he relates the sordid innuendo of the priest who sits Byrne on his couch, at a certain point the whole memory disappears: “Even years later it feels like the night has been concreted over. I’ve been picking at it with a pin ever since, afraid to use a jack-hammer, afraid of what’s buried in there”. It is striking, given that the memoir form is an excavation of memories, to encounter a memory that remains so sealed off to the storyteller.

Byrne interpolates that trauma with another sequence, earlier in life. The circumstances are that he is sent to bring food and drink to a group of young men who are working the land. When they have finished eating, they pick on him and the bullying turned sexual. Again, this recalls the film Spotlight, which centres on a group of Boston Globe journalists who broke the story of systemic child abuse and the protection of its perpetrators in Boston. As one outsider character in that film says: “If it takes a village to raise a child, it takes a village to abuse one”. The abuse Byrne suffered pervaded the culture from which he came, and this memoir stands as a rebuttal to claims of ignorance about it, a fig leaf for Irish communities that colluded in children’s suffering. As a lad, Byrne heard stories from boys in his Walkinstown estate about other boys who had been dispatched to ‘industrial schools’ in Connemara. He recounts hearing about the explicit acts they were made to perform.

After a spell on the Dublin stage and on RTÉ, Byrne was a jobber actor in London. That experience had a catalytic effect on him, as it did for other actors of his generation—Stephen Rea comes to mind. As with Rea, the opportunities that opened up in London for Byrne were bound up with moral and artistic constraints. Byrne grew weary with offers of roles to play a priest or an IRA man. As he said in an interview promoting this book: “That’s why I went to America—because I didn’t feel labelled or identified there”. It was the right move.

A sequence in this book that will stay with many readers is of Byrne at the Cannes Film Festival when he was catapulted to superstar status after The Usual Suspects opened there. He has an attack of anxiety and exits the festival to stay in a hotel for days. It is a vision of the troubles that beset him, which he attempted to drown in alcohol. His drinking led him to a profound personal crisis, to blackouts and waking up in ignominious situations. Yet he faced down his alcoholism. A great success of this memoir is how he recounts his confrontations with such demons and the clarity with which he expresses his journey. One of his celebrated recent roles was in the HBO series, In Treatment, in which he plays a therapist; Byrne brings elements of the therapist’s scrutiny to bear on his own life in this work.

This is Byrne’s first book but there is likely more to follow. His facility for writing, and the fulfilment he evidently took from writing this memoir, suggest so. Byrne’s lifelong search for his own voice in acting roles fuses in this book with his journey towards finding his voice as an author. He writes himself as he is rather than as he would wish to be seen. He has the courage to write disjointed sentences, to write episodically, and to portray the ways in which he let people down and behaved dishonourably. The portrait is richer for those struggles and his acceptance of himself. This book brings the reader, by turns painfully and joyfully but always authentically, into the mind and heart of one of the very finest actors Ireland has ever produced.