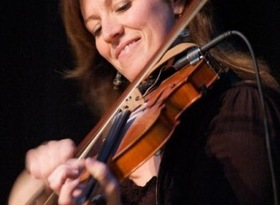 Wendy MacIsaac is a fiddler/piano player/stepdancer from Creignish, Cape Breton, Canada. Since the early 1990’s, she has toured the world in support of her solo recordings. Tomorrow night she takes the stage alongside long-time friend and musical cohort Mary Jane Lamond as part of the Re-Jigged Festival in Nova Scotia.

What is your own ethnic background/heritage?
I am of 100% Scottish descent. My ancestors landed on the west side of Cape Breton Island where the tradition lived and lives strong.

How, when and why did you get involved with music?
My mother taught step dancing lessons with Minnie MacMaster (Natalie’s mom) at community halls in Inverness County when I was about 3 and I used to go with them. I guess I just picked it up and then took some lessons from Harvey Beaton after that. Fiddle music and Gaelic language and singing were always heard at local concerts, radio programs and in my mom and dad’s and grandparents houses. So part of my music comes from osmosis. Then when I was 12, I picked up my friend Stephanie Wills’ fiddle at a concert and decided then and there that I wanted to try it. I started accompanying on the piano when I was about 15.

Are they the same reasons you do it today?
I play music today because it’s really all I have ever done as a job and also because I enjoy it. I’ve been playing for nearly 30 years.

What else inspires you?
When I listen to really good Celtic music I get inspired. Something I think is really good might not be what someone else thinks is really good but I’d say most Cape Breton fiddlers of my generation would be on the same page as me when I say inspiration comes from a tape of Carl MacKenzie or Arthur Muise with Mary Jessie MacDonald on the piano, or Howie MacDonald, John Morris Rankin and Dave MacIsaac or Buddy MacMaster and Betty Lou Beaton or Jerry Holland and Hilda Chaisson. There is something special about those old tapes. They don’t have the pristine quality that the newer recordings have but there is something to be said about just playing at a dance or a party and not worrying about mistakes or how fast or slow you are playing. I also get inspired by other celtic musicians and many musicians of other genres like blues, pop and rock. I have taken ideas from musicians like Lucinda Williams and Shawn Colvin to name a few.

What are the challenges of the vocation?
My biggest challenge these days is being away from my family. Both by missing them and also the work of arranging care for them when I am away. It’s never easy to afford touring. Prices of everything like fuel, accommodations and food are way up and on the down side, not as many people but cd’s and fees are staying the same. And because the Canadian dollar is so strong, we come with much less than we used to. But that’s the reality so you either stay home or suck it up.

What are the rewards?
Hands down, the biggest reward is having an amazing audience. That can simply make your night. Another reward is that over the years, you make some great friendships and we certainly do a fair share of laughing.

What have been some career highlights?
I was part of a show Celtic Colours put on called “The Unusual Suspects of Celtic Colours”. There were 26 musicians on stage: fiddles, piano, guitars, harp, mandolin, whistles, pipes, flutes, percussion, horns – most from Scotland and Cape Breton and a few from other places. It was fantastic. Touring with Heather, Cookie and Raylene Rankin as part of their Christmas tour a few years was another highlight. Then some shows I did with Mary Jane as a part of her awesome band like Lilith Fair, a Capercaillie tour, a world music festival in Brazil, and many trips to the west coast were also highlights.

How did the new recording with Mary Jane Lamond come about?
Mary Jane decided she wanted to pare down from the full band sound and asked if I could play more tunes in her sets and it eventually ended up as a split show. The recording then became an obvious decision.

What was the process like?
We picked songs and tunes we liked and then ran them by one another. In some tracks I picked out tunes I thought complimented the song and vice versa. We both like the same kind of tunes and songs.

What has the response been like so far?
So far we have had a great response to the recording by fellow musicians, promoters and the press. It’s wonderful.

Is your creative process more ‘inspirational’ or ‘perspirational’?
I guess a little bit of both. We sat with Seph Peters, who we tour with, and Brad Davidge for many of the tracks to throw around ideas and it seems to have worked. You always make changes when you get playing.

What makes a good song?
Melody, and the ability to put interesting chords with it. That my take. Mary Jane might answer that one better.

Are young people still interested in Celtic music?
Yes. There are a lot of younger kids and teenagers interested in lessons and also wanting to be a part of festivals, dances and sessions. I have 6 young gals coming for fiddle lessons and if I had the time, I could take many more.

What’s ahead on your creative agenda?
I will be busy booking shows for the band and thinking about new ideas for our next album whenever that will be!