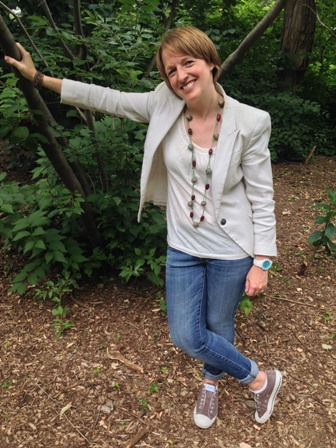 Yvonne Cassidy is the New York based author of three novels. Her latest, “How Many Letters Are In Goodbye?” is the story of Rhea Farrell, a young Irish girl, homeless on the streets of New York. Recently we spoke with the scribe about her passion for her professions.

What are your own roots?
I was born and raised in Dalkey, a small village about nine miles outside Dublin city. Mum and Dad are both “Dubs” too although their parents come from Kilkenny and Fermanagh and Laois.

What inspired you to become a writer?
It might sound trite to say that I’ve always wanted to be a writer, but it’s true. As a kid, I was a big reader and as I grew up books became even more important to me. Reading something in a novel that I had thought or felt but never been able to put into words was just amazing to me. To write stories that would offer that connection point to others seemed like the most natural thing in the world to want to do.

Are they the same reasons you do it today?
Absolutely.

What are the challenges of the profession?
It’s fiercely competitive and unless you are in the best seller list it’s not all that well paid. Like many writers I work part time to subsidise my income – it can be a challenge juggling everything, especially around deadline time!

What are the rewards?
For me there is nothing more fulfilling than being able to spend my days working at what I love. The days when I get an e-mail from a reader telling me how much they connected with one of my books are an extra special bonus.

How have you grown as a writer over time?
I took lots of writing classes over the years and read a ton of books about the writing process but most of my learning has come from writing itself. Each of my novels is very different and I think that’s because each time I like to take things a little further and learn something new about myself and about the process.

Is your creative process more ‘inspirational’ or ‘perspirational’?
Both. I think that for inspiration to come you need to put the hours in and show up, even when you don’t feel like it. Especially when you don’t feel like it. I’ve definitely had flashes of inspiration on the subway or during a yoga class, but mostly the “aha” moments come when I am sitting at my desk, in front of my computer.

What makes a good book?
I love books told in the first person where the character has a really strong voice. Being able to get inside the head of another person and live their story and get lost in it is utterly magical to me.

What motivated you to write How Many Letters are in Goodbye?
I wanted to write a story about a gay character where “coming out” was only part of the story and not the whole story. In many ways, I wanted to write a love story. I work with homeless people in New York and as the book took shape that seemed more and more to be a natural backdrop for the novel.

What did you learn during the process?
That writing an epistolary novel is more difficult than it looks! The format is restrictive in some ways and yet that brings a certain freedom too. Even more than my other novels I learned to trust my instincts and my character’s narrative voice.

How did you feel when the book was completed?
Exhilarated. Exhausted. Hopeful. In that order!

What has the response been like so far from those that have read it?
The response has been wonderful, really, really positive. One of the things I’ve been pleased to hear is that it’s a book that appeals to gay and straight audiences equally. Readers of all ages seem to engage with Rhea as a character and root for her through the many struggles she has throughout the book.

What’s next on your creative agenda?
I’m under contract for another novel which I’m working on at the moment. It’s too early to say much about it but I’m at that exciting early stage where the characters are forming and I’m starting to see the shape of the story. It always feels like I need to write the story for me first, and then I write it for the reader.