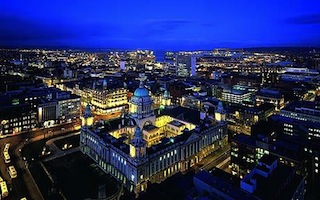 A city buzzing with art, culture, music and friendly locals, guest author Jonny Tiernan gives us his tips on what to do in two days in Belfast.

With any luck you will have planned your trip to Belfast so that it’s on a weekend, as that is when St George’s Market takes place. It’s filled with a wide variety of stalls and traders where you can buy art, antiques, clothes, oddities and a ton of other stuff. More importantly, there are also loads of food stalls and a seating area where you can chill out. I recommend getting one of the savoury crepes, and also a cup of special tea from the Suki Tea stall. They are a Northern Irish company that are now distributed all over, and their tea is delicious. If you’re feeling adventurous you could buy a bag of dulse, Irish seaweed. It’s an acquired taste, but I love it.

After the market you can take a walk along the river to the Belfast Barge, which is home to a café / restaurant and venue space, as well as the Maritime Museum, which is a unique take on the industrial history of the city.

Sticking with the boat theme, walk past the Beacon Of Hope public art sculpture (or Nuala with the Hula, as us locals call her), cross the bridge and head into the Titanic Quarter. Belfast is the home of Titanic. She was built in our shipyards over 100 years ago. Here you’ll be able to visit Titanic Belfast, a truly iconic building and home to a massive exhibition about the ill-fated liner. If you’re lucky, you might bump into some of the cast of Game Of Thrones or the new production of Dracula when you’re in the area, as they have been filming in the film studios at the Titanic Paint Hall.

You’ll also be able to visit Nomadic Belfast, the original tender ship to the Titanic. It has been restored to its former glory, and here you’ll be able to learn all about its history – including the fact that Charlie Chaplin was once a passenger (there were plenty of other famous passengers, this one just impresses me most).

Next up, head over to the Cathedral Quarter, the heart of the arts in Northern Ireland. First stop here is the Oh Yeah Music Centre, a three-storied creative hub for musicians housed in what used to be a bonded whiskey warehouse. You’ll be able to enjoy the Northern Ireland Music Exhibition and learn about the depth and breadth of creative talent that has originated from the country from Foy Vance and Van Morrison to Snow Patrol and Two Door Cinema Club. They also host live music events and loads of other stuff, so make sure to check their website to see what’s going on.

After this you can nip across to Golden Thread, one of Northern Ireland’s leading Contemporary Art galleries. It’s a really great space that presents work from local emerging and international artists. The three gallery spaces are filled with interesting installations and exhibitions and always has something interesting going on. If you’re a fan of urban sports, around the back of the gallery building is Bridges Urban Sports Park. This outdoor concrete park was the first of its kind in Northern Ireland, and is the new home for the burgeoning skateboard and BMX scene in Northern Ireland.

The newest arts venue in Belfast, and one of the most impressive buildings we have, is the Metropolitan Arts Centre (or The MAC as it is more commonly referred to). The main attraction is their fantastic gallery space, home to touring exhibitions. A recent highlight was Andy Warhol at the MAC. If you’re hungry by now, there are a bunch of options in nearby St Anne’s Square. I’d recommend Coppi, an Italian-centric place that does a variety of small tapas style dishes as well as excellent main courses too. Nearby, you also have Made In Belfast, which has super-quirky décor and hearty portions. If you’re after a drink, the Duke Of York is superb. The actual bar is pretty small, but if you can’t find a seat, never worry, everyone spills out into the alleyway at the front, which is marvellously well kept, with flowers in bloom and festoon lighting. There is also a great mural in their archway featuring Northern Irish and Irish famous persons, as well as some other Belfast-related murals within the car park. If you head into the City Centre, Home is my favourite restaurant in Belfast. They have a full vegetarian menu. They started out life as a pop-up restaurant, but it was so successful they took on a permanent location.

Ignoring the dubious name, Filthy McNastie’s has been a great addition to the Belfast bar and club world. They have developed into a complex with a quirky front bar, a superb beer garden, a cocktail bar and an upstairs club. It’s the pre-dancing venue of choice for a lot of folk these days.

If you wanted to stick to the pubs, The Crown is the oldest bar in Belfast, and nearly always rammed. Travelling a bit further into town, The Sunflower Pub is a top choice. You’ll notice that it has a bright green cage outside. This is the security cage that the previous tenants had installed during the troubles. The new owners decided to keep it for posterity, which is quite cool. They have a quality selection of ales, and do great live music too. When you’re ready to hit a club, Thompson’s have a great dance night called Misfit, where you can expect to see quality guests alongside solid locals. There is a lot of fun to be had on a night out in Belfast. The locals are very friendly, just strike up some conversations who knows where you might end up.

A great way to wake up and smell the roses is to head to Botanic Gardens and literally wake up and smell the roses. It’s a lovely place for a walk, and if it’s raining you can still visit the Palm House and the Tropical ravine. On a hot sunny day you’re guaranteed to find hundreds of people hanging out on the grass, playing games and generally avoiding studying or working.

Once you have freshened up, you can pay a visit to the recently renovated Ulster Museum, which is handily located within the grounds of Botanic. It’s free to enter and there is plenty to explore. If you are pushed for time, my tip is to head for the top floor and enjoy the museum’s extensive collection of art across their seven galleries. Irish and Modern Art are the strengths, along with a recently refurbished costume gallery and international touring exhibitions.

You’re probably hungry by now, so luckily you just have to walk two minutes from the Museum to Black Bear Café on Stranmillis Road. It’s a gorgeous independent art café that has lovely staff and great food. They cater to vegetarians and vegans super well and there is always a wicked selection of specials.

Next up you can take a walk down past Queen’s University, and saunter around the grounds if you fancy. The building boasts beautiful Victorian architecture and has stood on this site since 1849 – the poet Philip Larkin was a librarian here in the early 1950s. Walk a bit further and you’ll reach Lavery’s Bar, the oldest family owned bar in the city. It has some great beer gardens, a top-notch music policy, and a massive pool hall with 18 tables on the top floor. On Saturday nights they actually move all the tables out and it turns into a giant clubroom.

After a wee drink and a bit of pool, you could catch a movie at The QFT, an independent cinema beside the University that always has something good on, without a cheesy blockbuster in sight.

If you’ve worked up an appetite again, then just walk round the corner to Botanic Avenue and treat yourself to a Boojum. It is fast, excellent Mexican food, and the birthplace of what is now an Ireland-wide franchise and a true success story. It’s safe to say that Boojum can now be regarded as a Belfast institution. If you want to take a bit more time with your dinner, then The Moghul is a marvelous Indian restaurant on Botanic Avenue that will take good care of you.

Post-dinner, there are a wide variety of club nights and venues you can head to for dancing and good times. The Hudson Bar is my top tip. They have the best selection of beers, a newly developed Hudson’s Yard garden area, plus DJs and live music. The Limelight complex is the most popular alternative-leaning club in town right now, with three rooms playing rock, indie, dance and everything in between. It’s always rammed, and the crowd is quite young, so get down early if you’re heading here. The Menagerie Bar is a really cool dive bar that hosts a lot of leftfield events and that you won’t have to dress up for. If you’re looking for the gay scene, The Kremlin is the biggest gay club, and you also have The Foxes Den nearby, and Union St Bar.

The cliché about people being super friendly in Belfast isn’t a myth. Both punters and local promoters are full of enthusiasm and banter. If you get chatting with the people around you, there is a good chance you could end up at some kind of house party or after hours gathering. Just make sure you don’t overdo it and miss your flight home!

Jonny Tiernan is the General Manager of the Oh Yeah Music Centre in Belfast, (www.ohyeahbelfast.com); the promoter of the Gigantic club night (www.giganticclub.com); and a resident DJ at Lavery’s Bar (www.laverysbelfast.com). He was also the founder and publisher of Alternative Ulster (www.alternativeulster.com), a Northern Ireland based magazine that focused on the best of NI music and culture, plus quality international acts.