A Brief History of Galway 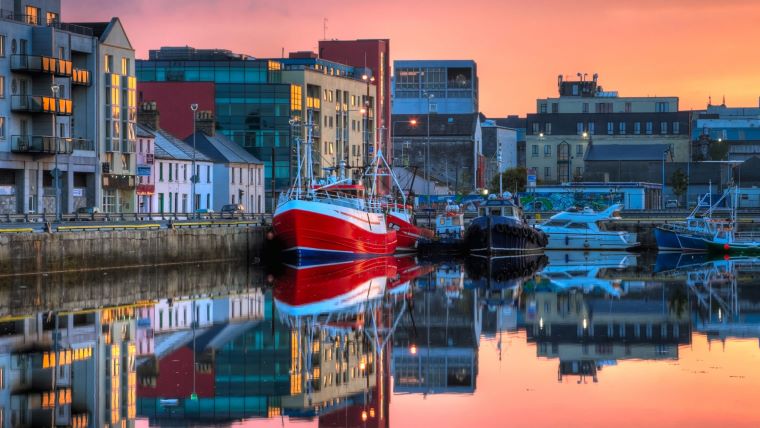 Located on Ireland’s scenic west coast, Galway has a rich and robust history.

Galway was first recorded in 1124 when a fort was built there. However, the town was founded in the 13th century. In 1170-71 the English invaded eastern Ireland and in 1232 a baron named Richard de Burgh took this area and created a town. After 1270 walls were built around Galway.

In 1396 Galway was granted a charter (a document granting the townspeople certain rights). Galway was made a royal borough. Then in 1484 it gained a mayor. By then Galway probably had a population of around 3,000. To us it would seem no more than a village but by the standards of the time it was a medium sized town.

For centuries Galway was dominated by 14 families known as the tribes of Galway. The mayor and the leading citizens usually came from these 14 families. They were the Athy, Blake, Bodkin, Browne, Darcy, Deane, French, Font, Joyce, Kirwan, Lynch, Martin, Morris and Skerrett families.

In the Middle Ages Galway was an important port. The main import was wine. Exports included wool, skins and leather. Yet, the leading citizens of Galway were definitely English in their manners and customs. In the 14th and 15th centuries the English kings gradually lost control of Ireland except for Dublin and the surrounding Pale.Although, to a large extent Galway was an island of ‘Englishness’.

Galway suffered two severe fires, in 1473 and 1500. (Fire was a constant danger because most buildings were of wood with thatched roofs. However, if buildings burned they could be easily replaced).

Lynch window commemorates James Lynch Fitzstephen who, it is said, hanged his own son for murder in 1493.

In the 16th century Galway was still a prosperous town and port. The main import was still wine. In 1505 some of the streets of Galway were paved.

Furthermore, Galway was given new charters in 1545, which extended its jurisdiction to the Aran Island. Galway was given another charter in 1579. At that time a writer said: ‘The town is well built and walled with an excellent good harbor and is replenished with many wealthy merchants.’

St Bridget’s Hospital was built in 1543. That year Galway suffered an outbreak of sweating sickness. It is not known exactly what this disease was, but it caused many deaths in the city. However, Galway soon recovered and prospered again.

The Spanish Arch was built in 1584 and Lynch’s Castle is a mansion built around 1600.

Browne Doorway is all that remains of a merchant’s house built in the early 17th century.

In 1610 James I gave Galway another charter, which made the city and the land for 2 miles around a county in its own right. However, Galway suffered severely in 1649 when plague struck the city. There was a heavy death toll.

Then in August 1651 the English under their general Edmund Ludlow laid siege to Galway. After a long siege the town finally surrendered in April 1652.

During the 17th century and 18th century Galway continued to be prosperous and in the late 18th century suburbs began to grow outside the walls.

At the beginning of the 19th century the population of Galway was about 5,000 but it actually fell during the 19th century. The whole region suffered severely in the potato famine of 1845-49 and there was a considerable loss of population.

The railway reached Galway in 1850. However, a great many of the inhabitants of Galway in the 19th century lived in poverty and squalor.

At the end of the century modern industries such as engineering, IT and electronics began to replace the traditional industries in Galway.

A statue of Padraic O’Conaire was erected in 1934. Kennedy Park is named after the President who visited Galway in 1963.

The Roman Catholic Cathedral in Galway was designed by John J Robinson in 1957. It was completed in 1965. Galway City Museum opened in 1977 and The Quincentennial Fountain was erected in 1984. Today Galway is an important local shopping centre. Eyre Shopping Centre opened in 1991.