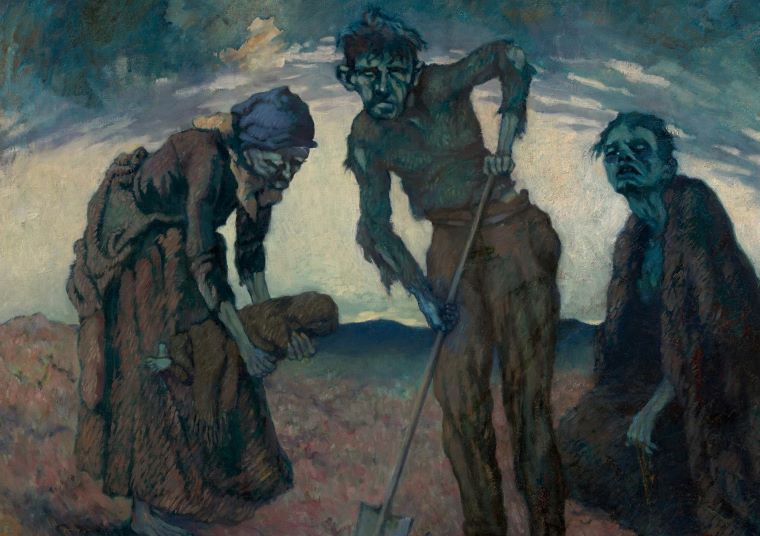 It’s not all that far to Tipperary, Ireland – not if you start in Kilkenny and make for the Famine Warhouse at the eastern edge of that song-famous county. My wife Sheena and I simply drove west for about 30 km, which included a short detour as we took a wrong turn and ended up exploring a one-lane road with a ridge of grass down the middle. The Famine Warhouse is the site of an 1848 incident known as the Battle of Widow McCormack’s Cabbage Patch – an episode that represented, to me, a fourth and final dimension of the Great Famine.

By this time, three weeks into our latest Irish ramble, and somewhat to my surprise, I had come face to face with the politics, the science, and the human suffering of the Great Hunger. I saw the Warhouse as a symbol of active response – rebellion. But I have gotten ahead of our wanderings around southeastern Ireland, an area that, during the famine years, fared relatively well. Hence my surprise.

In Dublin, we were taken with the power of the sculpted famine figures on the north bank of the River Liffey. We spent time at EPIC: The Irish Emigration Museum. And we poked around the Jeanie Johnston, the replica famine ship that I wrote about in the last issue of Celtic Life International.

But the political dimension didn’t manifest until we went to the Irish Potato Famine Exhibition, mounted upstairs at the St. Stephen’s Green Shopping Centre. The exhibition, which included posters, a 15-minute video, and an hour-long show of panel stills, delivered an overview before turning to specifics. Between 1845 and 1852, approximately one million Irish people died of starvation or disease, while another two million fled the country, many of them coming to Canada.

Tens of thousands of farmers were forcibly evicted by absentee landlords spouting the free-market doctrine of “laissez-faire.” One photographic image, from County Clare in the west of the country, showed the house of Mathia Magrath “after destruction by the Battering Ram.”

Some scholars present slightly different numbers, saying 1.5 million died in Ireland and 1.5 million emigrated. Either way, the three million total explains why some have described the Irish Famine as the worst human disaster of the 19th century – a devastation only exceeded by the Jewish holocaust almost a one hundred years later.

During the decade that followed the Great Hunger, another two million people departed from Ireland.

Today, largely as a result of all this, the Irish diaspora encompasses 70 million people around the globe. Among them we find almost five million Canadians and 35 million Americans.

But the politics. This exhibition points a finger at the policies and attitudes of British Parliamentarians, notably Lord John Russell, prime minister from 1846 to 1852, and Charles Trevelyan, the assistant treasury secretary who handled the Irish file. A narrator explains that Trevelyan “believed that God and market forces were on the same side” and that the Irish Famine was “a visitation of God” and a way of solving an overpopulation problem. Bigotry and convenient, self-serving myopia.

After driving due south along the coast for 155 km, we set up in the lively seaport-town of Wexford, cornerstone of Ireland’s “Ancient East” and traditionally a center of resistance to British rule. At nearby Johnstown Castle, a splendid gem of gothic revival architecture, we walked along beside an ornamental lake and admired a Victorian walled garden. The surprise came when we wandered into the Irish Agricultural Museum, which is housed in refurbished farm buildings. Here we encountered another Great Famine Exhibition – this one lacking a video, though comprehensive and notable for its scientific rigor and detail.

Sailing ships from the Americas brought the potato to Europe late in the 16th century. It became a diet staple, especially in agricultural Ireland. Potato blight followed the same route and reach continental Europe in 1843. Blight is a fungal disease that attacks leaves and tubers. Spread by spores in the air, it turns up as a small dark spot on a potato leaf and wreaks havoc. Seed tubers sustain the fungus through winter and so infect a still larger crop the following spring.

The Johnstown exhibition is replete with charts and graphs illustrating and analyzing everything from the decline of small farm holdings to the prevalence of various Famine-related diseases, among them typhus, Asiatic cholera, and scurvy or “black leg.”

Up to 85 per cent of those who died during the Great Hunger did so not from starvation but from fever or disease.

Here, too, we read of government-sponsored workhouses, where conditions were so miserable that, by August of 1846, only 43,000 people had taken refuge within. As the Famine intensified, these penitentiary-like buildings came to accommodate hundreds of thousands of people, desperate for the three sparse meals a day they could earn by toiling on make-work projects, usually roads. When the famine ended, 40 per cent of the children who entered the workhouses had been orphaned or deserted.

By the time we reached Kilkenny, that medieval town 80 km northwest of Wexford, we thought we understood the human suffering induced by the Famine. But a visit to the sparkling MacDonough Junction Shopping Centre taught us otherwise. In 2005, developers set about creating this contemporary plaza out of a prison-like workhouse from the mid-19th century.

Today, visitors can rent headsets and take a 50-minute audio-visual tour, the Kilkenny Famine Experience, which guides them through the story of the Great Hunger as it unfolded at this location. While developing the site, excavators discovered the forgotten graves of more than 970 people who died here, mostly between 1845 and 1851, and among them 545 children.

As at other workhouses, rations at the Kilkenny site were spartan enough to inspire riots, yet few people died of starvation. Typically, disease killed them first, one of typhus, typhoid, diphtheria, smallpox, tuberculosis, or cholera. Bullying, amputations, death-dealing stampedes – as the potato-famine wore on, this place had them all.

The audio-visual tour culminates at a bronze sculpture that honors John and Patrick Saul, two boys abandoned by their parents at the Dublin docks. They had walked to the capital with their elders from Clonmel in County Tipperary – roughly 180 km away. The parents, a butcher and his wife, boarded a ship for Australia after first telling their sons, ages 15 and 13, they had a better chance of surviving if they turned around and made for home. The boys, increasingly hungry, walked another 130 km before calling in here at the newly built workhouse.

Despite the odds, the Saul brothers survived and eventually made their way to abroad.

Ani Mollereau, the artist who created the commemorative sculpture, describes the lower part as representing the boys’ journey to Dublin. The older boy pulls the younger up from their early life onto a better pathway. The piece is shaped like the flame of a candle, she says, and so represents hope.

For we two visiting Canadians, the Kilkenny Famine Experience, taken as a whole, spoke eloquently of human suffering during the Great Hunger.

Having already encountered the politics in Dublin and the science at Johnstown Castle, I needed only the rebellion to round out my sense of the Famine years. And so, from Kilkenny, we drove west to visit the Ballingarry Warhouse, site of an episode in the Young Ireland Rebellion of 1848.

By then, not surprisingly, the disease, the deaths, and the coffin ships had sparked an uprising among those who felt that the protests of Daniel O’Connell, the renowned Irish Liberator, were proving ineffectual. Some of the rebels, known collectively as Young Ireland, besieged 47 policemen from the Irish constabulary in this lonely farmhouse near Ballingarry – a house belonging to the widow Margaret McCormack. Out front, they raised the Irish tricolor for the first time. The police took five of the widow’s children hostage and used them to keep the Young Irelanders at bay. With reinforcements on the way, the rebels disbursed, but soon their leaders were arrested, tried, and transported to penal colonies in Australia.

We located the house but, having neglected to make an appointment, found it closed. And so we wandered around the yard and tried to peek in the windows but could make out none of the various exhibits. I knew they treated the rebellion, the treason trials, the banishments to Australia. I knew they situated this Irish rebellion of 1848 in the context of revolutionary events then taking place across western Europe. I would have liked to have seen the exhibits but, alas, for another time. We had arrived where the Irish tricolor flew for the first time, where that fourth and final dimension of the Great Famine manifested, and for now, that would have to suffice.

Ken McGoogan recently published his 15th book: Flight of the Highlanders: The Making of Canada.