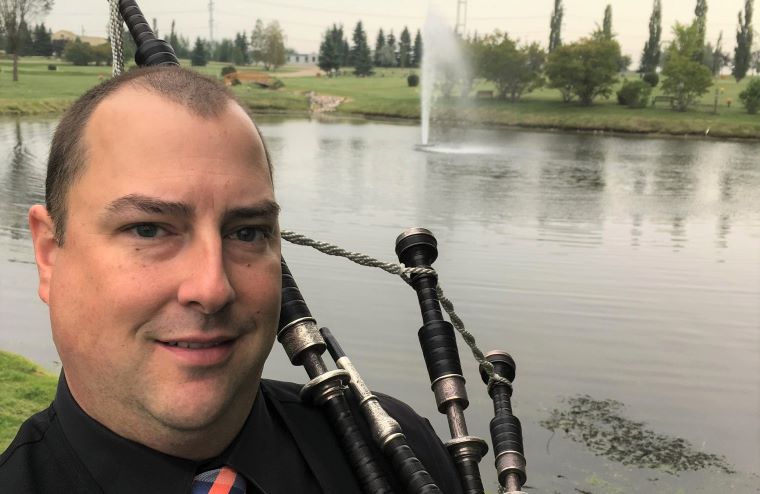 With both Scottish and Irish heritage, Alberta native Alastair Briggs can trace his roots back to Clan Johnston (or Johnstone).

“We had family that were equine warriors protecting the Scottish Borders from the English,” he shares via email from his home in Edmonton.

Now 42 years old, Briggs had aspirations of being a bagpiper since the age of three.

“My uncle was a piper with the Shriners and my mom had asked him to come and play a few tunes at our house. He obliged and played early one morning, waking me up and, in the process, scaring the living daylights out of me. Ever since that day, that sound resonated within me and I started listening to bagpipes and pipe bands on some Black Watch records that my parents had.”

Before taking up the pipes, Briggs tried his hand at other musical instruments, including the recorder, piano, guitar, snare drum, and the double bass – which he played in the Edmonton Symphony Youth Orchestra. Then, once he turned nine, the bagpipes became part of his repertoire. He started out playing with the Edmonton Boys Pipe Band (now the Edmonton Youth Pipe Band), which he would later go on to instruct.

“It wasn’t until I attended the Coeur d’Alene School of Pipes & Drums in 1987 that I learned about some of the best pipe bands out there with the like of the 78th Frasers and Strathclyde Police.”

Briggs has generally stayed true to traditional musical style on the pipes, currently playing a silver set of David Naill Bagpipes with Victorian engraving. “The tonal properties are stunning with a mellow blend of tenors and a deep, rich bass.” 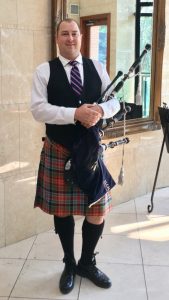 For more than three decades, piping has remained his personal passion.

“I am still piping today because I love the music, the sound and the history.”

“For me, there isn’t anything more personally satisfying than a nice performance on a well-tuned instrument,” he continues. “As of now, I do enjoy performing more than competing. If my pipes are singing to me, I know that to the not so well-educated ear it must sound really good. And that, really, is the best form of acknowledgment.”

For Briggs, his most treasured memories are the times he has spent in bands. His achievements with the Alberta Caledonia Pipe Band (otherwise known as AlCal) and his collaboration with the Wajjo African Drummers are among his career highlights.

“The friendships that I have made along the way are actually the best part for me.”

He has experienced his share of accolades as well, including AlCal’s 7th place finish in the Grade 1 division at the World Pipe Band Championships in 2001.

“Placing first in the qualifier at the Worlds was definitely a wonderful achievement especially when we didn’t have idea of where we stood on the international stage.”

And, although he admits that solo competition has never been his forte, he was awarded the Lieutenant General Quinn Award for the best cadet piper in Canada when he was 18.

These days, Briggs is a part-time piping teacher. He believes that the sheer cost of the hobby is a barrier to young people who might otherwise be interested in the instrument. More affordable music programs, he says, could help remedy this.

“Bagpipes and other musical instruments can help with respiratory strength, concentration, stress and depression relief, coordination, posture, mathematics in timing, and exercise. Getting involved in the community and making sure the instrument continues to be heard will draw people’s interests. The skirl of the pipes is unprecedented and one that is so obscure yet delightfully haunting it will garner the attention of any audience.”

Going forward, he hopes to once again pick up some of the other instruments he learned to play when he was younger. He also aims to eventually take another trip to revisit his roots.

“I would like to return to Scotland and compete at the World Pipe Band Championships so that I can introduce my family to some friends from around the world and show them another part of the world where my family is from.”

In the meantime, he will continue teaching pipes to anyone who is willing to learn.

“I have always wanted to be a piper and am grateful for where piping has taken me around the world. It really is amazing how many wonderful people you can meet playing bagpipes. Music truly is the international language of all humanity.”