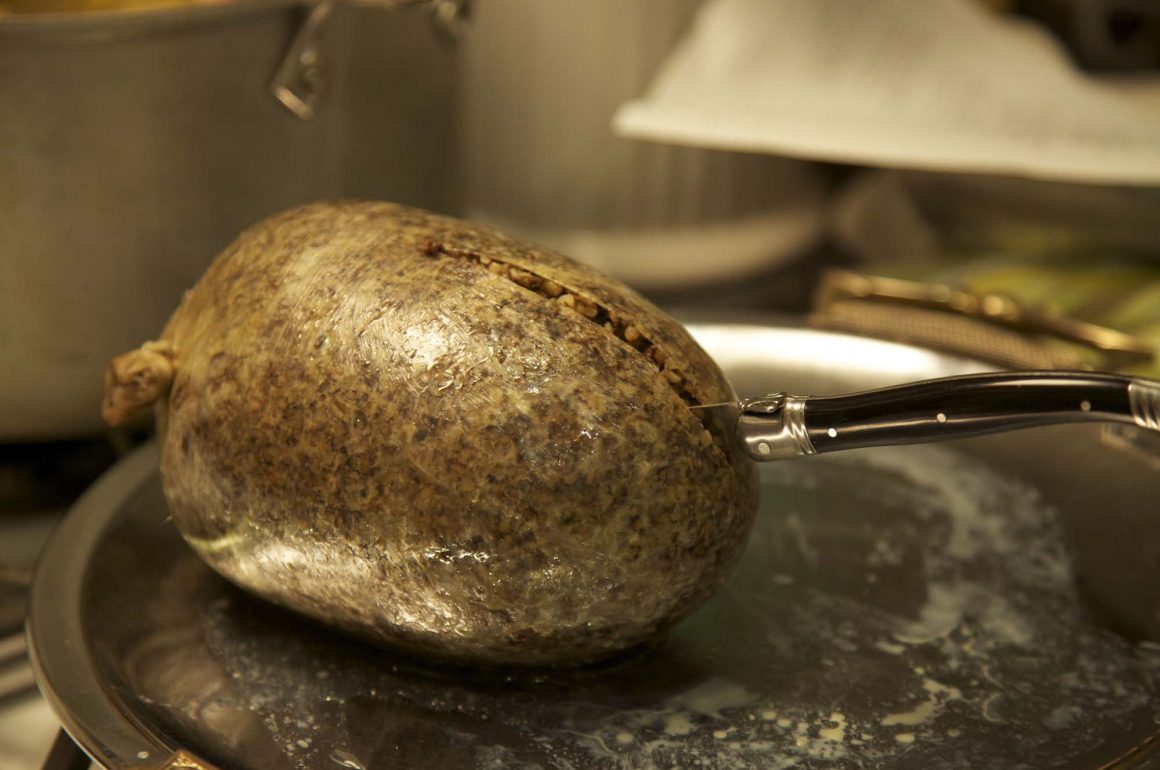 The haggis is frequently assumed to be Scottish in origin, however there is evidence to suggest that the Ancient Romans were the first people known to have made products of the haggis type.

There are many recipes, most of which have in common the following ingredients: sheep’s ‘pluck’ (heart, liver and lungs), minced with onion, oatmeal, suet, spices, and salt, mixed with stock, and traditionally boiled in the animal’s stomach for approximately three hours. Haggis somewhat resembles stuffed intestines (pig intestines otherwise known as chitterlings or the kokoretsi of traditional Polish cuisine), sausages and savoury puddings of which it is among the largest types. As the 2001 English edition of the Larousse Gastronomique puts it, “Although its description is not immediately appealing, haggis has an excellent nutty texture and delicious savoury flavour.” Most modern commercial haggis is prepared in a casing rather than an actual stomach. There are also meat-free recipes for vegetarians. It is often asserted (e.g., on the packaging of MacSween’s haggis) that the dish is traditionally served with “neeps and tatties” (Scots: swede, yellow turnip or rutabaga and potatoes; these are boiled and mashed separately) and a “dram” (i.e. a glass of Scotch whisky). However, it might perhaps be more accurate to describe this as the traditional main course of a Burns supper, since on other occasions haggis may be eaten with other accompaniments. Whisky sauce (made from thickened stock and Scotch whisky) has recently been developed as an elegant addition.

History
The haggis is frequently assumed to be Scottish in origin though there is little evidence for this, and food writer Alan Davidson states that the Ancient Romans were the first people known to have made products of the haggis type. A kind of primitive haggis is referred to in Homer’s Odyssey, in book 20, when Odysseus is compared to “a man before a great blazing fire turning swiftly this way and that a stomach full of fat and blood, very eager to have it roasted quickly.” Haggis was “born of necessity, as a way to utilize the least expensive cuts of meat and the innards as well” (Andrew Zimmern). In times of famine people would eat whatever it was that they could get their hands on, which is how all those fascinating ingredients became a part of Scottish tradition. Clarissa Dickson Wright repudiates the assumption of a Scottish origin for haggis, claiming that it “came to Scotland in a longship [ie. from Scandinavia] even before Scotland was a single nation.”. Dickson-Wright further cites etymologist Walter William Skeat as further suggestion of possible Scandinavian origins: Skeat claimed that the hag– part of the word is derived from the Old Norse hoggva or the Icelandic haggw, meaning ‘to hew’ or strike with a sharp weapon, relating to the chopped-up contents of the dish. One theory claims that the name “haggis” is derived from Norman French. Norman French was more guttural than normal French so that the “ch” of “hachis”, i.e. “chopped”, was pronounced as the “ch” in “loch”, giving “haggis”. Dickson Wright suggests that haggis was invented as a way of cooking quick-spoiling offal near the site of a hunt, without the need to carry along an additional cooking vessel. The liver and kidneys could be grilled directly over a fire, but this treatment was unsuitable for the stomach, intestines, or lungs. Chopping up the lungs and stuffing the stomach with them and whatever fillers might have been on hand, then boiling the assembly — likely in a vessel made from the animal’s hide — was one way to make sure these parts did not go to waste.

Folklore
In the absence of hard facts as to haggis’ origins, popular folklore has provided more fanciful theories. One is that the dish originates from the days of the old Scottish cattle drovers. When the men left the highlands to drive their cattle to market in Edinburgh the women would prepare rations for them to eat during the long journey down through the glens. They used the ingredients that were most readily available in their homes and conveniently packaged them in a sheep’s stomach allowing for easy transportation during the journey. Other speculations have been based on Scottish slaughtering practices. When a Chieftain or Laird required an animal to be slaughtered for meat (whether sheep or cattle) the workmen were allowed to keep the offal as their share.

Modern usage
Haggis is traditionally served with the Burns supper on the week of January 25, when Scotland’s national poet, Robert Burns, is commemorated. He wrote the poem Address to a Haggis, which starts “Fair fa’ your honest, sonsie face, Great chieftain o’ the puddin-race!” During Burns’s lifetime haggis was a popular dish for the poor, as it was very cheap, being made from leftover, otherwise thrown away, parts of a sheep (the most common livestock in Scotland), yet nourishing. Haggis is widely available in supermarkets in Scotland and other parts of the world (and in some parts of England) all the year round, with cheaper brands normally packed in artificial casings, rather than stomachs, just as cheaper brands of sausages are no longer stuffed into animal intestines. Sometimes haggis is sold in tins, which can simply be microwaved or oven-baked. Some supermarket haggis is largely made from pig, rather than sheep, offal. Haggis can be served in Scottish fast-food establishments deep fried in batter. Together with chips, this comprises a “haggis supper”. A “haggis burger” is a patty of fried haggis served on a bun, and a “haggis bhaji” is another deep fried variant, available in some Indian restaurants in Glasgow. Higher class restaurants sometimes serve chicken breast stuffed with haggis which is often referred to as “Chicken Jacobite”; haggis can also be used as a substitute for minced beef in various recipes. In some Scottish butchers, Haggis is combined with Lorne sausage, colloquially known as “Braveheart” sausage. Another modern haggis-based dish is ‘Flying Scotsman’, chicken stuffed with haggis. This dish is also known as Balmoral Chicken when the chicken is stuffed with haggis and also wrapped in bacon. Since the 1960s various Scottish shops and manufacturers have created vegetarian haggis for those who do not eat meat. These substitute various pulses and vegetables for the meat in the dish. Since both the offal-based and the vegetarian haggis have wide variations in flavour depending on the recipe used, it would be difficult to demonstrate that the two varieties do or do not taste alike.

Drinks with haggis
Scotch whisky is often asserted to be the traditional accompaniment for haggis, though this may simply be because both are traditionally served at a Burns supper. Warren Edwardes of Wine for Spice notes that haggis is spicy and therefore recommends refreshing semi-sparkling wines to drink with haggis with increasing level of sweetness depending in the spiciness of the haggis: whisky, with its high alcohol level, can exaggerate peppery spice (unlike the capsaicin in chili, which it dissolves) rather than complement it. Haggis-maker MacSween conducted a taste-test which confirmed that whisky is a proper accompaniment, and adds that lighter-bodied, tannic red wines, such as those made from the Barbera grape, are also suitable, as are strong, powerfully flavoured Belgian beers, such as Duvel and Chimay Blue.

Use outside Scotland
Haggis is a popular with expatriate American Scots due to the strong connotations it has with Scottish culture, especially for Burns Suppers. It can easily be made in any country, but is sometimes exported from Scotland. Haggis may not be imported into the USA from the UK since the BSE crisis of 1989. This is due to haggis’ offal ingredients such as sheep lungs. The British Food Standards Agency disputes these concerns, and states that there is no reason for the import of haggis to be restricted.

Entertainment
Haggis is an amusing subject for many people. Along with some other foods associated with a specific country or region (such as Australia’s Vegemite, Norway’s lutefisk, Nova Scotia’s Ropi Pie, or Scandinavia’s salmiakki), it’s perceived to be loved in its home country and loathed by the rest of the world. Many tourists are also duped (or nearly duped) by Scottish pranksters attempting to lead them on a ‘Wild Haggis Hunt’. The Scotsman newspaper’s web site runs an annual Haggis Hunt. Haggis is also used in a sport called haggis hurling, throwing a haggis as far as possible. The present Guinness World Record for Haggis Hurling has been held by Alan Pettigrew for over 22 years. He threw a 1.5 lb Haggis an astonishing 180 feet, 10 inches on the island of Inchmurrin, Loch Lomond, in August 1984. ‘Haggis’ is an uncommon surname, such as for the screen writer Paul Haggis, known for his work on Million Dollar Baby, Due South, Thirtysomething,and other film and television series. In names it may come from Old English, meaning ‘a woodsman’s hut’, and a Lord Haggis rode on the third crusade with Richard the Lionheart. Following his victory in The Masters golf tournament in 1988, Scottish golfer Sandy Lyle chose to serve Haggis at the annual Champions Dinner before the 1989 Masters.