Ancient Academia in the Celtic World 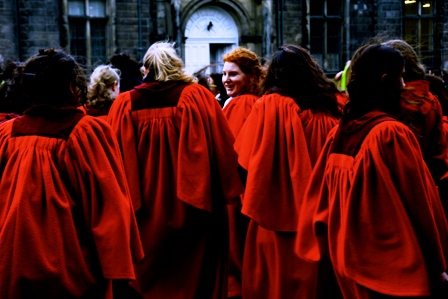 The Celtic world has a prestigious academic legacy spanning over six centuries, producing hundreds of thousands of the most well educated alumni who have shaped the world in which we live. Educated Celts graduated from their universities, founded and developed important institutions in their own countries, and many emigrated to found the thriving Celtic communities in the colonies and dominions. Without the Ancient Celtic academic institutions, the most important of which still exist and thrive today, the world would be a very different place.

Originally founded in 1410 by Augustinian Priests who had been expelled from the University of Paris as a result of the Papal schism, and from the Universities of Oxford and Cambridge because of the Anglo-Scottish Wars; the remoteness of the town of St Andrews in the north-east of Scotland enabled the newly established Society of Higher Learning to flourish. Courses in philosophy, logic, divinity and law became popular amongst clergymen who had chosen to attend lectures in St Andrews. From 1411, the Bishop of St Andrews, Henry Wardlaw, petitioned the Avignon Antipope Benedict XIII to grant the society university status. Numerous Papal Bull letters were written, and on 28 August 1413 the University of St Andrews was officially created, to become the 3rd university in the English speaking world.

The new university divided into a series of colleges, each with their own unique buildings; St John’s College, which would later be renamed St Mary’s College, was founded in 1418 and focused on theology and arts; St Salvator’s College was established in 1450, and St Leonard’s College in 1511. After many centuries of financial problems and dwindling student numbers, the university decided to accept women into their degrees by offering Lady Literate in Arts degrees from 1889. This degree was ground-breaking at the time; not only was St Andrews the first university in Scotland to offer women degrees, it also allowed women to become as equally educated as men. As a result of the university’s long history and prestigious heritage, the institution became popular amongst the world’s upper classes, and has retained this position since.

The University of St Andrews has some of the most famous alumni of any university in the whole world, not just the Celtic world. Three signatories of the US Declaration of Independence achieved degrees from St Andrews; James Wilson, who became the first justice appointed by President George Washington to the Supreme Court of the United States; John Witherspoon, who was President of Princeton University; and Benjamin Franklin, founder of the University of Pennsylvania. Other notable alumni include King James II of Scotland, founder of the Church of Scotland John Knox, creator of the Smallpox vaccine Edward Jenner, and the current Duke and Duchess of Cambridge, Prince William and Kate. St Andrews instilled Celtic traditions and knowledge unto all of its alumni, which are now also being instilled through the institutions and businesses that they established. The Ancient Celtic academic experiment proved successful.

Many of the Ancient buildings first used when the university was founded are still in use for lectures today; the legacy of St Andrews’ founding fathers and Celtic academic pioneers live on. As you travel around this Ancient town, as the strong winds blow from the sea and the chilly air travels down from the north, it becomes obvious how influential the university buildings have been in shaping the landscape of this centre of knowledge and learning. St Salvator’s Quadrangle is the oldest remaining part of the university still standing, located at the heart of the town. The Medieval college chapel, bell tower, tenement building and Hebdomodar’s building have existed since 1450 and are just as grand and impressive now as they would have been then. The light grey and orange square Jacobean-styled building with ornate carvings, sash windows, and numerous spires surrounds a neatly manicured grass lawn hidden from passers-by. St Salvator’s Quad is typical of Scots Celtic building style in the Medieval period, but not many of these buildings exist in such splendour and majesty as this integral part of the university, nor is it possible elsewhere outside of St Andrews to see how a town has been built around a university, rather than a university built around a town.

St Mary’s College building is just as impressive as St Salvator’s. Built from traditional Scottish grey stone in 1538, it is complete with bell tower above the main entrance, a thorn tree inside its quad – which is said to have been planted by Mary, Queen of Scots – and the King James library, inaugurated by King James VI of Scotland, who would become King James I of England and Ireland. St Mary’s College also boasts a unique Roundel, a rounded wall protruding from the building. To enter the St Mary’s Quadrangle you must pass through dramatic crested gates with the motto ‘In Principio Erat Verbum’ which are the first words of the Gospel of John, meaning ‘In the beginning was the word’, paying homage to St Andrews position as a place of religious learning. Of the many medieval buildings still standing in St Andrews, this one is arguably the most prestigious given its history. As you explore St Andrews town it is not hard to find a building that is, or at one time was, an integral part of the learning landscape of this prestigious Celtic academic institution.

With age comes traditions and customs, and St Andrews is no different. Some of the customs are very Celtic in nature, and are unique to St Andrews. Every new student, until recently, had to take the Sponsio Academica oath in Latin; promising to obey university bylaws and paying homage to St Andrews’ position as one of the few Ancient universities. Another uniquely St Andrews tradition is gown wearing. Red gowns are worn by undergraduates, and black gowns by Divinity and postgraduate students, on all manner of occasions including at Union Debating society meetings, at formal dinners, and during church services. On St Andrews day gowns are often worn all day. Raisin Week is a bizarre but entertaining, and exclusively St Andrews tradition. Historically, first-year students (bejants/bejantines) would be assigned “parents” who would guide them through their academic life; to thank these parents a pound of raisins was given as a gift. Today this has evolved into the giving of bottles of wine. In return, “parents” give the students a Latin “Raisin Receipt” which is carried everywhere throughout the day. Raisin Week culminates in a foam fight, and any bejant who has a spelling mistake on their receipt must sing the Gaudie (formal graduation song).

In the Reformation years, St Andrews witnessed many Protestants labelled heretics. Along with exploring all that this historic town has to offer with its medieval buildings and traditions, keep an eye out for initialled cobblestones scattered around town. These mark spots where Protestants were burnt at the stake. In 1528 Patrick Hamilton was burnt, and according to student legend, anyone who steps on his cobblestone will be cursed to fail their degree. Don’t be surprised if you see students jumping over ‘JP’.

St Andrews is one of the most prestigious universities in the world, founded on Celtic traditions and with a uniquely Scottish mind-set.