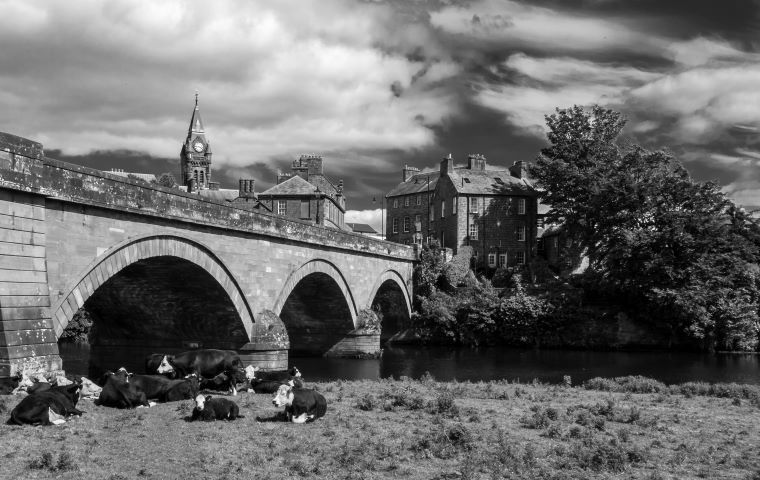 Our award-winning photojournalist Tom Langlands invites us into the heart of his hometown.

My wife and I moved to Annan in southwest Scotland almost forty years ago. It was never meant to be a permanent stay but rather a temporary pause on a return journey where the outbound leg had taken us from Dundee to London in search of work. After a year in Annan we realized how much this small, market town had to offer and how its location was ideal for road connections to other parts of the U.K. When we wanted the bustle of city life a little over an hour by car would take us to Glasgow or Edinburgh and when we wanted scenery and solitude the rural landscapes of Dumfries and Galloway or the English Lake District were on our doorstep. Wanting to better understand the town I immersed myself in learning about its history and, in those early years, I teamed up with a local history teacher and together we gave guided walking tours of Annan for visitors and incomers like myself.

As coronavirus swept the world at the start of this year a strange and unexpected thing happened to me; I saw Annan in a different light. When lockdown came and the government encouraged us to take daily exercise, I often found myself wandering through the town. Devoid of vehicles and people the empty streets came alive in a surprisingly different way. Free from the need to watch out for cars and pedestrians, and in the absence of the other sights and sounds that bombard us daily, I was able to look around and let my mind roam free in the silence. I stood on the hill that once elevated the famed Bruce family’s 12th century, motte-and-bailey castle and I swear I heard the toing and froing of horsemen crossing the river shallows below. Fast forwarding the centuries, I was jolted by the sound of gunfire accompanied by shouts and screams as yet another English raid razed the town. As the imaginary smoke and flames subsided I wandered the High Street and saw the people mingling around the open-air meat market and, further still, I was hit with the smell from Fish Cross where the local fisherman sold their catch. I passed Robert Burns making his way from the Provost’s House to the Buck Inn clutching his freshly penned ‘The Deil’s Awa Wi’ the Exciseman.’ Hans Christian Anderson stepped out of the Blue Bell Inn, Thomas Carlyle bade me ‘good-morning’ as he headed to school, Hugh Clapperton stopped to inform me he had just returned from Canada and was visiting his hometown before heading off to explore the course of the River Niger and local preacher Edward Irving was being drummed out of town for heresy! Dorothy Wordsworth passed through noting, “The town of Annan made me think of France and Germany; many of the houses large and gloomy, the size of them outrunning the comforts. One thing which was like Germany pleased me: the shopkeepers express their calling by some device or painting; bread-bakers have biscuits, loaves, cakes painted on their window-shutters; blacksmiths horses’ shoes, iron tools, etc. etc.; and so on through all trades.” 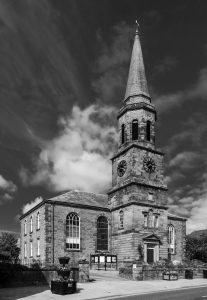 In this mishmash of time and people I heard the clattering of horses and carriages associated with the coaching inns and I witnessed the future Emperor of France – Prince Louis Napoleon – staying at the Queensberry Arms Hotel as he headed to the medieval, re-enactment tournament at Eglinton in Ayrshire.

I stopped to watch the master stonemasons working on the prestigious buildings that still define the town today.

A young Ben Nicholson was building some of the world’s largest tea-clippers at Annan harbour and Port Street was bustling with shipbuilders, joiners and sailmakers. These were the heydays before trains and cars changed the economic landscape and returned the town to more modest times. These were also the days captured by early photographers who left a legacy of images that provide an insight into Annan’s past.

As a photographer I was fascinated with these old images, but it wasn’t the recording of static moments in time that intrigued me. As I looked beyond the blurred figures in their flowing black dresses and dark suits, I could see faces that spoke of prosperity or misery, of wealth and of poverty. These photographs were not just a record of their day they were a window into the soul of a town and its inhabitants. Walking Annan’s empty streets I became conscious of the fact that while we exist in a given moment in time we are also part of a story that started long before our own chapter began and will continue to be read long after our chapter has ended. How it is read by future generations depends upon how it is recorded by the current one. That was when I knew that I had to use my camera to capture the spirit of the town and its people through this unique and difficult period in its history.

The lack of people and cars made the architecture more prominent and so I began by photographing the empty streets and buildings. It felt important to capture the beauty of what previous generations had left us and, in doing so, show the current generation what was at risk of being lost through decay and lack of investment. As the days and weeks passed, I switched my attention to recording people returning in small, tentative numbers and then in greater numbers. I needed to show what it was like when the wearing of masks became compulsory and how some people found fun in personalizing their masks. I wanted also to capture the difficulties, the sadness and the hope and joy that shines through the masks. Having experienced the emotions evoked when viewing the photographs of previous generations, I knew my images needed to be more than just a record.

For me street photography is visual prose – the difference between recording a moment and creating a mystery. It has as much to do with what the image doesn’t show as what it does. 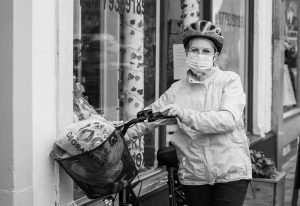 For my street photography I prefer to work mostly in monochrome. In some instances, colour is effective but it can also distract as different colours draw the eye to different parts of the image. Monochrome photographs allow the viewer to concentrate on the subject matter and the story behind an image as well as creating a timeless quality that allows photographs to retain their impact through the ages.

There are however always exceptions and one of my favourite photographs from Annan is indeed a colour one. It was of a young woman standing outside a shop on a sunny day. As I went to press the shutter, she looked directly at me. Her red hair, purple mask and gold, reflective sunglasses expressed strength and beauty but with an air of mystery. To me her appearance suggested that she respected this coronavirus but that she would not be cowed by it. In many ways she embodied the Celtic spirit and the ancient Celts fascination with gold. I gave this image the title Pure Gold.

As the Belgian surrealist René Magritte noted, “Each thing we see hides something else we want to see.” I aim to create images that evoke feelings and in which the viewer not only sees the obvious but is drawn to interpret and to imagine. I want viewers to look into my images – not at them – as I strive to capture the true spirit of the time. The spirit of Annan lives in its history, its architecture, the people of yesteryear and the people of today. Through my photographs I hope to show future generations what we have gone through in a small, market town in southwest Scotland. We may be sharing the same coronavirus problem with the rest of the world, but Annan is unique and its people are all unique.