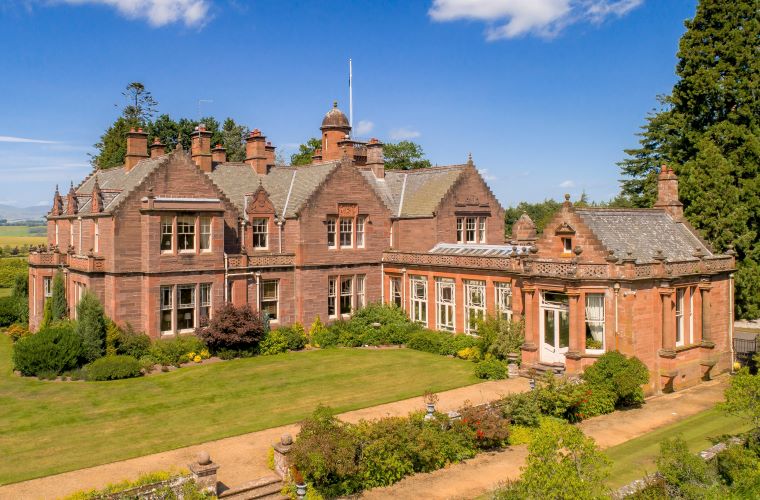 Living in Scotland, I am rather spoilt for choice when it comes to selecting castles or stately homes to visit. However, occasionally, I discover an architectural gem that has been hiding just off the mainstream radar. It isn’t necessarily the biggest or the most lavish and yet it can surpass all my expectations on account of its setting, history, architecture, beauty, and the love and care that has gone into creating and maintaining a piece of my nation’s cultural heritage. Auchterarder House in Perthshire is such an example.

Secreted on a wooded knoll set in 20 acres of mature grounds – less than four miles from the world-renowned, five-star Gleneagles Hotel with its four golf courses, and a mere two miles from Auchterarder High Street – sits a gem of Jacobean-style, domestic architecture. Designed in 1831 for Lieutenant Colonel James Hunter by the famous Scottish architect William Burn – albeit with subsequent additions and alterations – its sandstone walls, crow-stepped gables, sculpted window-head dormers, and circular tower articulate an imposing villa. Pass through the large wooden doors below the arched, stone portico and you step into an interior of sumptuous spaces with wood-panelled walls, decorative plaster ceilings, textile wallpapers, and crystal chandeliers – all augmented by an impressive art collection.

Following a major restoration project by current owner Robert Wiseman, this unique, private home is now available as an exclusive rental property with its website claiming it to be ‘one of the most luxurious houses to rent in the Scottish Highlands.’ After a guided tour of the property by House Manager Wilma Hutchison I would concur with that opinion – it is outstanding. 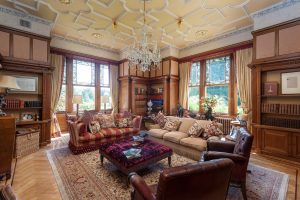 Although the Renaissance-styled interiors have a certain grandeur, the site remains modest in scale and not overtly ostentatious. It felt like a cozy, inviting, family home.

Perhaps that impression was reinforced by the presence of a six-foot, decorated Christmas tree in each of the house’s ten period-style bedrooms, along with an even larger tree in the hallway – part of Wiseman’s preparations for his own family’s Christmas gathering. I can imagine them carving the turkey on the elongated, dining table with glasses sparkling below the Waterford crystal chandelier while being overlooked by Charles E. Gordon Frazer’s anthropologically important oil on canvas – Cannibal Feast on the Island of Tanna, New Hebrides, a hint of Wiseman’s dark humour. Later, they may retire to the drawing room for a recital on the baby grand or a reading in the library from any of the leather-bound volumes on the twenty-five yards of shelving. Alternatively, take a moment to read a framed, original letter by Bonnie Prince Charlie that sits alongside a watercolour by the great Scottish artist Sir William Russell Flint – such is the eclectic nature of the house’s collection. For anyone wishing to enjoy a movie there is the comfort of the cinema room or alternatively there’s the quiet atmosphere of the billiard room.

Keen to learn more about the history of this fascinating house I spoke with Wiseman via video link from his home in Surrey. His enthusiasm for the property and his knowledge of its history was obvious. Records show that following the death of Hunter in 1887 the property was acquired by James Reid. Reid was the Glasgow-based owner of a successful, locomotive-building company, and it was during his ownership that the building was further expanded and altered. Following Reid’s death, the property passed to his son Hugh. By the early twentieth century Hugh Reid was head of the amalgamated North British Locomotive Company supplying steam locomotives to railroad companies across the world, including Canada, Mexico, France, Japan, and New Zealand. Following his death in 1935, his son Andrew inherited the house.

Throughout the years the Reid family showed a great love for Auchterarder House and displayed significant philanthropy towards many projects and causes in Auchterarder, Glasgow, and Scotland generally. During WWII, Andrew Reid made the house available to the pupils of Glasgow’s Laurel Bank School for Girls who were evacuated to avoid the German bombing raids on the Clydebank shipyards. For many of the girls this was their first experience of country living and of residing in a rural mansion. The resultant bonds of friendship and the memories created remained with them long after the war ended. Their story is immortalised in the book The Time of Our Lives by Dr. Joyce B. Deans.

In the early 1980s the house was sold to become a hotel. Dignitaries reputed to have stayed there included former US President Ronald Reagan and former British Prime Ministers Margaret Thatcher and John Major. By the end of the 1990s it was acquired by the Wren’s Hotel Group before finally being purchased by Wiseman in 2002 with the intention of restoring it to its former glory as a family home. Wiseman’s family had made their fortune in the milk industry. His father – also Robert – founded Robert Wiseman dairies in 1947, having started by delivering milk with a horse and cart from the family farm. The company was to become one of the biggest milk suppliers in the UK. For Robert Wiseman Junior the connection with the town of Auchterarder started forty years ago. 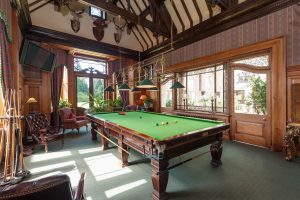 “It began as a place to get away from the grey skies and wet weather that can often affect the west coast of Scotland where I grew up. As a family we loved Perthshire so we bought a small house in Auchterarder where we could spend summer holidays and take weekend breaks.” Once restoration works on Auchterarder House began in 2003, Wiseman quickly realized that years of poor maintenance and underinvestment would soon see the £1.2M purchase price pale into insignificance. “It seemed that every time we opened something up, we encountered further problems. All the electrics and plumbing needed redoing, there was vegetation growing behind the wall linings, and we discovered dry rot behind the ornate timber panelling.” Undeterred, he restored the house, paying studious attention to every detail. Specialists were brought in to advise on the restoration of the interiors and landscape consultants advised on the design and management of the grounds. Even a muddy depression in a waterlogged field was excavated to form Lily’s Lochan. With over ten thousand oxygenating plants, the small loch – named after his daughter – supports a stock of native brown trout and a seasonal, colourful, lily display. Heron and ospreys visit the loch, deer wander the grounds, and red squirrels scurry through the trees. Wiseman’s passion for the property remains evident, “It was a difficult, challenging, and costly project but the building deserves it. It has a great history and some amazing people have lived here over the years. For my family it has been a wonderful home and lots of great memories were made here.”

As the years went by and his family grew up and left, he considered putting the property back on the market. When the time came, however, he realized that he didn’t want to part with it.

Rather, he decided to turn it into an exclusive, lettable, 10-bedroom luxury property that could still be used as a family home when necessary. That decision gave rise to the second major refurbishment project of Wiseman’s ownership and ended with the house I have just viewed. Although the property retains its historic character it offers facilities for the disabled, state-of-the-art Wi-Fi, and other mod-cons to be expected of modern living. I am cautious about the overuse of superlatives, but this is a truly outstanding, wonderful, and architecturally important piece of design and restoration. It oozes quality, with an attention to detail and an obvious love and care that few owners are willing – or can afford – to lavish on a two-hundred-year-old house. For anyone who wishes to experience staying in an iconic, historic building with stunning interiors and an impressive art collection, situated in a beautiful and private location that can boast great views and with Scottish wildlife on your doorstep then undoubtedly this is a property worth considering. ~ Story by Tom Langlands