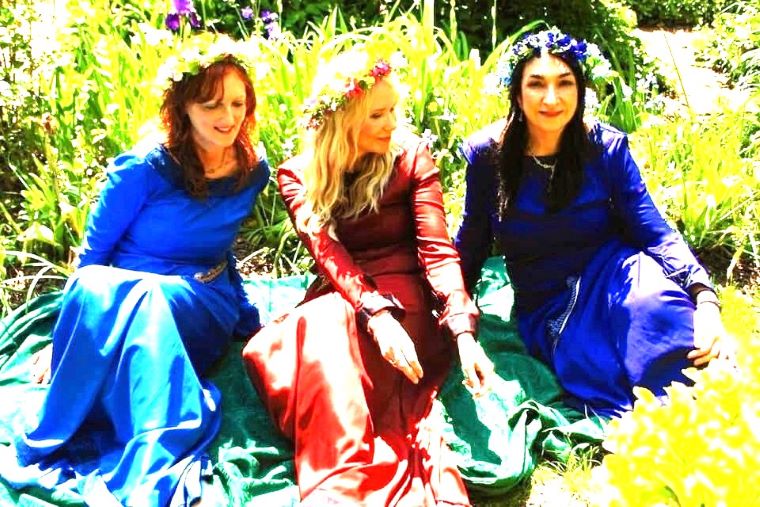 Given their mutual harmonic heritage, it is understandable that Andriette Redman and Kath Green were destined to connect through music.

“We each grew up in musical households, so music has been a part of our lives since we can remember,” Redman shares with Celtic Life International via email. “Kath’s dad with his barbershop and choir-singing, and her mom as a piano teacher.”

“Andriette’s grandparents, aunts and uncles with their music store, music school, and entertaining,” adds Green. “Andriette and I, friends from the same floor of our apartment building, founded Avon Faire with our mate Betsy Long from England, in 2013. Starting with local Irish pubs and community garden gigs, we developed our sound and repertoire.”

“After being seen on a YouTube video, we were invited to play a Renaissance Faire, The Loxwood Joust, in Sussex, England,” Redman chimes back in. “We shared a stage with the well-known Mediaeval Baebes in 2015, and nearly every year since. Riddles and Love Songs, our first CD, received good reviews.”

Betsy left the group shortly thereafter, leaving the door open for Anna Marie Spallina to step in. Filling out the roster is percussionist John Rokosny and step dancer Dawn Daniels.

“We also have a revolving set of talented friends who join us on occasion,” notes Green. “Cáit O’Riordan of the Pogues, piper Cillian Vallely of Lúnasa, rock cellist Jane Scarpantoni, and others.”

Along with regular gigs in NYC, the troupe has performed in pubs and other venues across North America and the United Kingdom.

“Our summer tours in England have been fabulous,” shares Green. “We have met so many wonderful people there who love and support traditional folk music. Playing a stage at the Cropredy Festival was fulfilling, especially getting the nod of approval from Fairport Convention fans.” 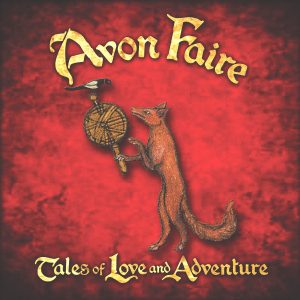 “Performing in historic churches on mini tours with the medieval Wilde Roses, complete with candlelight and rapt crowds, was also enchanting,” adds Redman. “Sharing our songs at English pubs and popping in at their special folk nights has a magic, too, where all sing along.

“Sometimes they will initiate Irish songs for us, figuring we may be on the Irish American side. A town hall in Cornwall, on a remote, blustery coast, had everyone singing their Cadgwith Anthem and sea shanties with us. “We are inspired while traveling and playing in areas from where our songs originate, and we hope to tour in Scotland, Ireland, and Wales as soon as we can.”

Most recently, Avon Faire released a new album, Tales of Love and Adventure, featuring the whole extended group and their frequent collaborators – all of whom have some Irish, Scottish, or other Celtic history in their lineage. Redman explains that the group pushed the boundaries of their stylistic influences for this record and tried to incorporate as much of that Celtic heritage in its tunes as possible.

“We wanted to do an album of rich and diverse repertoire, so we have Scottish and Irish songs, sea shanties, medieval ballads, fun, danceable tunes, and so on.”

“It is a nice mix of styles, genres, and time periods,” pipes in Green. “But it still manages to sound like a cohesive work.”

She adds that that some of their favourite new tracks include “our richly-arranged version of Skye Boat Song, the moody beauty of Flowers of The Forest, and the rollicking fun of the sea shanties and The Jolly Beggar.”

Redman believes that the Celtic music scene is enjoying an era of vibrance, but she would like to share the mic with more all-women acts like theirs and ensure that they can make a decent living at it.

“The biggest challenge by far – and one that we share with so many other artists – is earning a living through our craft.”

Green concurs. “We hope for fairer payment for all musicians, for their streaming and performances. Another thing we need to pay heed to is nurturing our health, physical and vocal, especially while on tour.”

Whatever the challenges, Avon Faire expects to remain busy in 2022 and beyond.

“The joy of making music and sharing it with others is a delight that keeps us going,” says Redman. “We will be promoting our new album with gigs, god willing, and hoping everyone stays healthy ’round the world.”