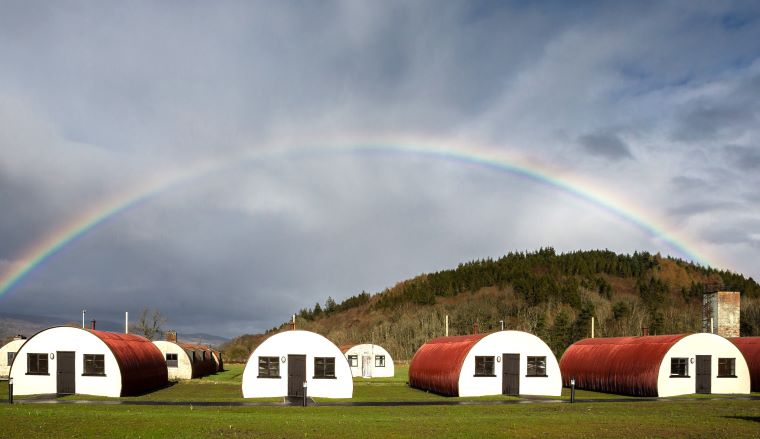 A little more than two miles south of the village of Comrie in Scotland’s southern Highlands lies an unusual complex of elongated buildings with curved, red roofs and white painted gables. This is the remains of Camp 21 – also known as Cultybraggan. It is one of the United Kingdom’s three remaining purpose-built, prisoner-of-war camps from World War II and it is the best preserved in Scotland.

I met Susan Holoran by the camp gates. She is the Visitor Experience Officer with Comrie Development Trust that owns and manages the site. “Take a moment,” she says, “Imagine that you have just come from the horrors of fighting the D-Day allied invasion forces in Normandy and are now captive in a foreign land where you don’t speak the language. Along with dozens of your fellow soldiers you have marched the last two miles from the railway station to find yourself standing at these gates.” As the sun shone on the surrounding hills, I observed a deer in an adjacent field and listened to birdsong drifting from nearby woods. I commented that I could think of worse places to be. “Well, let’s see,” she added, and we headed into the camp.

Construction of Camp 21 began in 1941 and was undertaken by mainly Austrian and German Jewish refugees. Encompassing 90 acres of land, the site was surrounded by a high, barbed wire fence. Inside the enclosure, 16-foot wide prefabricated Nissen huts of varying length were assembled. These buildings would function as prison dormitories, kitchen and dining facilities, officer’s mess, latrines, and site offices. In addition, there was a brick-built detention block. Today, some 80 Nissen huts and the detention block remain representing around 50 per cent of what once existed here. 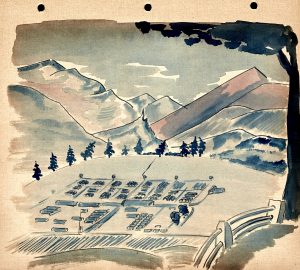 When the camp opened in 1942 it was intended to house Italian prisoners of war, but one of the first occupants was a sergeant from the Argyll and Sutherland Highlanders who had gone AWOL over concerns for his pregnant wife. Only several hundred Italians were ever held here and, following the Italian armistice of 1943, these numbers fell further with the camp becoming a transit base for German POWs before they were moved to more permanent camps. In May 1944, Cultybraggan – which had capacity for 4,500 persons – held 785 German POWs. By December of the same year – and following the D-Day landings at Normandy in June – it housed 3,988. It became known as a “Black Camp” – one which fell under the grip of diehard Nazis. “Here,” according to Holoran, “were housed members of the Waffen-SS, Afrika Corps, Fallschirmjäger (Luftwaffe paratroopers) and U-boat crewmen. Many of these individuals were fanatical supporters of Hitler and considered dangerous.” Inside the camp they formed their own Rollkommando – a military gang – doling out brutal justice to anyone perceived as aiding or abetting their captors or displaying disloyalty to the Führer. It was at Cultybraggan on Dec. 22, 1944, that the infamous murder of POW Feldwebel (Sergeant Major) Wolfgang Rosterg occurred, although events that led to his death could be traced to a camp in the south of England. In the weeks prior to his murder, a group of hardened Nazis planned an audacious, mass escape from Camp 23 at Devizes, Wiltshire. Their plan was discovered and 27 of them were moved to Cultybraggan.

Rosterg (who was not involved with the escape plan) openly opposed Hitler and had acted as translator at Devizes. He was also sent north as part of this group. Within hours of arriving at Camp 21, he found himself before a kangaroo court, wrongly accused of being a traitor. He was horribly beaten, and his lifeless body was found hanging in the latrines the following morning. Three days previously another inmate, Oberleutnant (lieutenant) Willy Thormann, was also found hanged in suspicious circumstances. No-one was ever charged with Thormann’s death, but eight individuals were charged with Rosterg’s murder and five were hanged for it at Pentonville prison, London in 1945. The oldest was 21 years old.

Given the nature of some of the individuals held at Cultybraggan, maintaining discipline was difficult.

The camp was fenced into four main sections – A, B, C and D – and, in 1944, Polish guards were deployed. Because of what had happened to their homeland, they harboured a particular hatred of Germans. After their deployment, life for the POWs got harsher. Straying too close to a fence or communicating across different camp sections was forbidden and could result in a warning shot being fired. At least one German – Heinrich Schwarz – is known to have been shot dead for this reason.

Over time, some of the prisoners regarded as being the most dangerous came to realize that they had fallen victim to Hitler’s propaganda machine. Heinrich Steinmeyer, who was 19 years of age, had come up through the ranks of the Hitler Youth and was serving with the notorious 12th SS Panzer company when he was captured in Normandy in 1944 and sent to Camp 21 where he stayed until June 1945. He was then sent to a camp in Fife where he worked on neighbouring farms. Following his release in 1948, he remained in Scotland and, along with another prisoner, made frequent return visits to Comrie where he established lasting friendships. In 1970, he returned to Germany to look after his ageing mother. When he died in 2014 at the age of 90, he left his life savings of £384,000 to benefit the elderly of the Comrie community. A tree was planted inside the camp in his memory and his ashes were scattered on the surrounding hills.

History has recorded some of the legacies of good and evil that percolated the barbed wire perimeter of Camp 21, but it can be harder to establish what everyday life was like for the average prisoner. Inside one of the huts, Holoran shows me a copy of a pen and ink sketch of prisoners having a snowball fight. “Thanks to a unique and significant collection of over 60 drawings by a German POW that has surfaced depicting everything from the interiors of dormitories to men playing games, reading, attending concerts and gathered around a stove we have a better understanding of life behind the wire,” she shares. 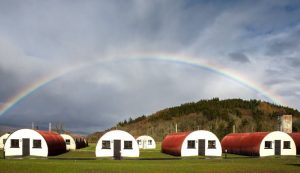 Although the war ended in 1945, some prisoners were not repatriated until three years later. That was due to logistical problems given the numbers involved and a desire to ensure huge numbers of diehard prisoners wouldn’t immediately regroup and restart the fighting. Significant efforts were made to de-Nazify prisoners prior to repatriation after the war.

After the last of the POWs were repatriated, the camp was used by the military for training purposes before being acquired in 2007 by Comrie Development Trust. A masterplan has now been prepared for the conservation and regeneration of this historic site. It focuses on four principal approaches: commercial lets, events, self-catering, and museum/interpretation. Five of the Nissen huts have been converted to provide self-catering, holiday accommodation with a further four planned and another destined to become a cafe. The site boasts a Men’s Shed – also used by women on different days – and huts used by local Scouts and Beavers groups as well as a karate training club. Other buildings are used for storage purposes by a range of community organizations and some 35 different businesses now have a presence here. A large area is set aside for community allotments and there is even a small orchard. Previous uses of the site have included concerts, craft fairs, European Open Day events and school education days. Holoran is busy creating an interpretation centre and museum and with the help of an actor, an atmospheric video has been produced that takes visitors back inside Cultybraggan when it was PoW Camp 21.

It may look like an odd collection of red-roofed sheds in a remote corner of a beautiful Scottish landscape, but Camp 21 at Cultybraggan played a vital role in subduing Hitler’s Nazis during WWII. Today, Comrie Development Trust is embracing admirably the conservation challenge of looking to the future while remembering and respecting the past. ~ Story by Tom Langlands

Photos courtesy of Tom Langland and the Comrie Development Trust