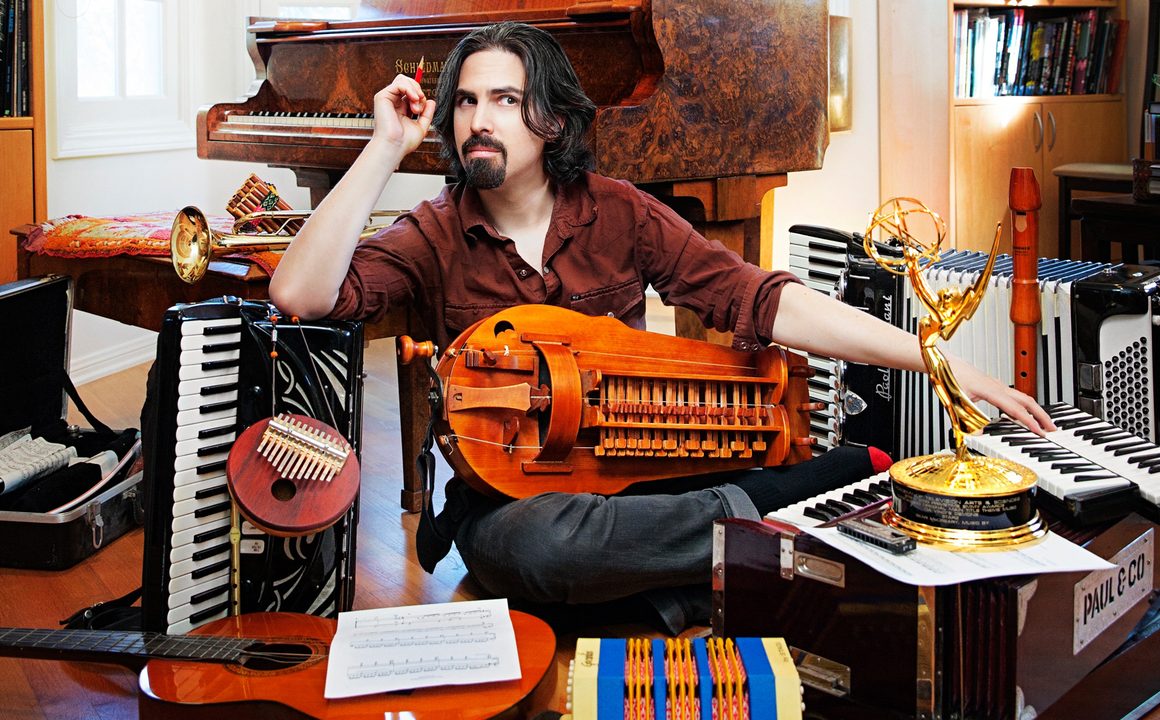 While you might not recognize Bear McCreary by sight, you are likely to know what he sounds like. Though just 38 years of age, the multi award-winning composer and arranger has created spectacular soundscapes for both film and television, including the smash STARZ series Outlander. Recently we spoke with him from his home in Los Angeles.

What is your own heritage?
My ethnic background is very frequently represented in my music. I am part Scots-Irish – the “McCreary” should make that pretty obvious – and I am also part Armenian. There’s also some Northern European in there, but the Scots-Irish-Armenian categories tend to be the ones that I associate with, and not coincidentally, I very often write for instruments that are part of those cultures.

How long have you been involved with music?
I have been playing and writing music, essentially, since I was a youngster. I started piano lessons at age five. I was also a huge fan of soundtracks and movie music, and probably around the time I was nine or 10, I put two-and-two together and started trying to write my own movie music. By the time I was in high school that was pretty much all I did. Before school, after school, I would just compose in as many styles as I could. When I started discovering westerns, I wrote a western movie song; when I started watching horror movies, I wrote horror music. I just became very taken with, and adept at writing film music. I can say very safely that it is the only thing that I have ever foreseen as a career, or ever really wanted to do.

What were some of the movies that inspired you musically?
I think the earliest and biggest influence was probably Back to the Future by Alan Silvestri. That came out when I was six, and I snuck a tape recorder – a little Fisher Price tape recorder – into the movie theatre, and held it up to could record the audio of the movie so I could listen to the music when I went home. Then I discovered the soundtrack album, and realized you could actually get the music without all that pesky dialogue in the way. Other scores that have had a huge influence on me include Conan the Barbarian by Basil Poledouris, scores by Enio Morricone, Nino Rota, Jerry Goldsmith, Elmer Bernstein, and Danny Elfman. I have always just absolutely adored film music, and film composers were, and remain, my artistic heroes. 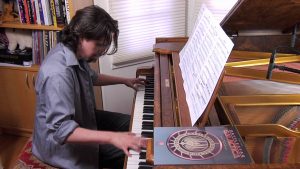 Are they the same reasons that you continue to play today?
I think very much so, yes. I still find inspiration in their music. I still listen to every composer I just mentioned, alog with others like throw in James Horner, John Williams and Shirley Walker. I mean, these are the guys and gals that inspired me when I was kid, and I still find inspiration in their music today. It takes me back to a child-like state, which is where I think you need to be in order to be creative.

What have been some career highlights?
I am not sure where to start with this. My first job was scoring the show Battlestar Galactica. That work had a huge impact on pop culture, and arguably it had a huge impact – a contributing impact – to the television landscape that we see today. So, in many ways, the career highlight was kind of right out of the gate. But I have been very fortunate to be involved in a number of incredible projects and meet amazingly creative people; I have worked with Frank Darabont on The Walking Dead. I have worked very closely with J.J. Abrams on 10 Cloverfield Lane. I have held concerts of my soundtrack music all over the world. I am currently scoring Outlander, which has afforded me the opportunity to explore the Celtic music that I love so much. I feel like my whole career has been one big highlight, and I feel like I am the luckiest person alive to do what I love and love what I do.

What are some of the challenges of the vocation?
That is a great question, and I really have to think about what the word “challenge” even means in this context. In many ways, I think I am hardwired to thrive on challenge. Some obvious and immediate challenges that come to mind for me include getting a full night’s sleep, which I essentially never do; I am working all day, every day – there are no days off. I am sort of like an on-call doctor – if a client calls me at 11-o’clock at night on a Saturday night, I get up and go. Because I am not just an artist in that regard, I am also an entrepreneur running my own business. If I have bad business practices, then I am out of business. I am exhilarated by all of that, so while it is challenging, that doesn’t mean it is a bad thing. It is definitely exhilarating, and it is a part of the business that I didn’t necessarily think about when I was a kid.

What are the rewards?
The reward for being able to be an artist and an entrepreneur at the same time is, very simply, that I get to do this. The job itself is the reward. For me, the thought of being allowed, in my lifetime, to write music that moves other people is more reward than I could have ever hoped for. Knowing that my music has an emotional impact on other people is an incredibly profound experience. In fact, I crave that so much that I have structured my entire life to have that experience as much as possible. 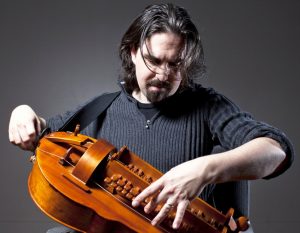 In terms of your creative process, is it more “inspirational” or “perspirational?”
My process is probably 50/50 – so both, really. I would love to paint the picture of me being like Mozart, and just writing everything down on a page as it comes to me, but that is so not me. I am very much a person that feels like I am always chiselling away at an idea, like the thought is a block of marble, and I know that the statue is inside there somewhere, but I have just got to keep hammering at it. With that said, the inspiration is a vital component of what makes every composer unique. In many ways, my first instinct – the thing that I think when I watch a movie, even in a very rough state, for the first time – is what defines me. It is what makes a Danny Elfman score different from a John Williams score. I feel like, for all of us in this industry, that the initial idea when you experiences a film, whatever comes out of your mouth – even if it is weird – is yours.

What’s next on your musical agenda?
I am currently doing a number of features, and I am writing and developing a Broadway musical, which is an entirely new world for me. I am still doing a lot of television projects. I am putting out records, and I am gearing up to do some more live performances, so lots of great things on the horizon. I guess I always like the feeling of doing something new. I just hope that I get to keep writing music as much as possible.