Bottlenose Dolphins of the Moray Firth 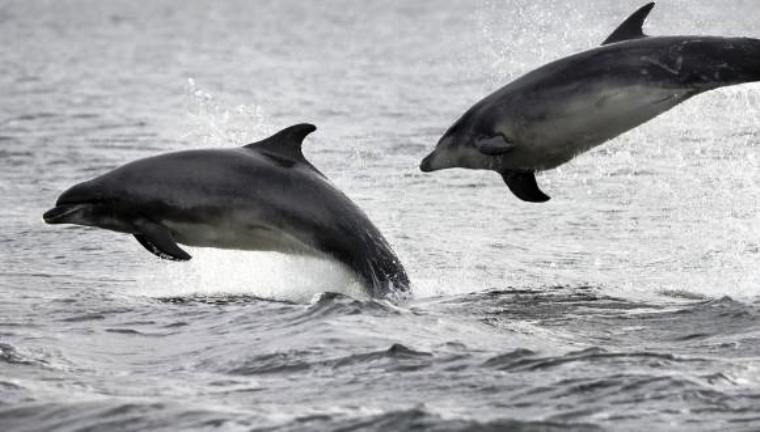 Heading north on the A9 from Inverness, I pass between the slender steel support cables of the impressive Kessock Bridge spanning high over the waters of the Beauly on inner Moray Firth. To the east and in the distance, the Beauly Firth expands into the outer Moray Firth and much further, the latter merges with the North Sea. I am en route to photograph bottlenose dolphins off the coast of Scotland.

Once over the bridge, I arrive on a peninsula with the intriguing misnomer of the Black Isle. I head east with two possible destinations in mind: Avoch (pronounced “och” as in “loch”) where I can take a boat trip in search of these magnificent creatures, or Chanonry Point at Fortrose, a little further but the best place for observing these animals from the shore. I am keeping my options open when fate takes a hand revealing a door to the past and a fleeting link across two continents. 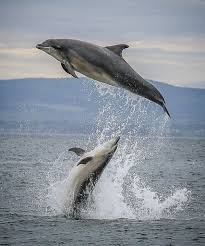 Driving into the small village of Avoch I spot a sign indicating the way to Alexander Mackenzie’s grave. Always interested in my nation’s history and its enigmatic characters, a short detour leads to the grounds of Avoch Church where, in a walled enclosure, commemorative plaques and a Canadian flag confirm I have found the final resting place of that great North American explorer immortalised in river and place names on so many maps of modern-day Canada. From my elevated position above this small fishing village I look down over the town, its small harbour and across the waters of the Beauly Firth, and I ponder Mackenzie’s relationship with this place.

Following his explorations across the North American continent he returned to the UK and in 1812 married Geddes Mackenzie (no relation), heiress of the estate of Avoch. He had an active interest in the local community and in 1814 he built a new harbour at Avoch to the design of the famous Scottish engineer Thomas Telford. The harbour benefited the local fishing fleet which, at that time, was the lifeblood of the village. Although altered and enlarged in the early 20th century, this is the harbour from which I now decide to sail in search of the bottlenose dolphins.

Only two populations of resident bottlenose dolphins exist in the waters of the UK. One comprises a pod of around 130 animals at Cardigan Bay in Wales, the other a pod of some 190 animals in the waters of Scotland’s inner Moray Firth. The group residing in the inner Moray Firth is the only remaining population in the North Sea. It is difficult to know for how long they have inhabited these waters, but there are fishermen’s tales of “Louper Dogs” (leaping dogs) going back to the 1800s and it’s believed these stories refer to the famous dolphins.

I head to a pinch point where the waters of the Firth narrow. It is defined by Chanonry point on the Black Isle side and on the south side, Fort George, constructed to suppress possible Highland insurrection after the Battle of Culloden. This is a regular place for dolphin sightings, occasioned by the restricted space through which salmon, the dolphins’ main food source, have to run. The tide is high, the water slack and it’s not long before the first of several dolphins is spotted.

A shout goes out and a dorsal fin appears above the water’s surface at a distance of about 200 metres. We head in that direction and the inquisitive nature of these highly sentient creatures kicks in. Within minutes four powerful adult dolphins are escorting our small boat. Their arching bodies, with grey glistening skin, slide effortlessly through the water.

Then, in an instant, first one and then another breach, clearing the surface of the water by some three or four metres. The resulting splash sends water showering over our boat. Then they plunge towards the shoreline where a faster-flowing channel guides the salmon to their freshwater spawning grounds. 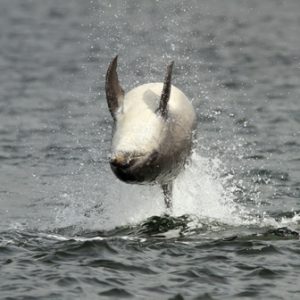 The hunt is on. Dorsal fins slice through the water creating sleek waves. They disappear below the surface, leaving a hint of a wake as if from some high-speed underwater giant. After a moment’s pause, the surface erupts and a dolphin clears the water tossing a large salmon high into the air above it. A large crowd is gathered on the shingle beach and for the next 15 minutes one dolphin after another repeats this process. Several others join the hunt including a mother teaching her calf. They are now so close to the shore that the whole event appears to be part hunt and part display for the spectators.

Salmon are plentiful in the Firth but when numbers fall the dolphins eat cod, whiting, haddock, pollock, herring and mackerel. The two latter species have a high fat content and are a favourite in late autumn and winter. Squid is another important food source. The dolphins of the Moray Firth need good fat reserves to survive in their cold, northerly habitat and consequently the animals of this pod are the fattest of their kind in the world.

Dolphins are highly social animals and within the overall pod small groups and sub-groups form. These may contain as few as six dolphins or sometimes 20 or more. There is some fluidity between members of these smaller groups with individual dolphins appearing in different groups at different times. For ethical reasons none of these dolphins is tagged and all of the individuals are identified through variations in size, shape, colouration, markings and scars. Some dolphins never seem to stray far from the inner Moray Firth, but others are known to travel up to 100 miles (160 km) per day reaching as far as the Tay and Forth estuaries and possibly even beyond.

While the latest research indicates this pod has increased slightly in numbers in recent years, Danny Groves, the communications manager for Whale and Dolphin Conservation (WDC), warns against complacency. “Such a small isolated population is extremely vulnerable. They face a broad range of threats from activities such as oil and gas exploration and production, large and numerous marina developments, chemical pollution, fishing nets and gear, and large offshore wind farms proposed in the coming years. All of these activities, individually and collectively, are putting increasing pressure on the dolphins and their environment.”

The Moray Firth is a busy area and many conflicting interests exist. With dolphins living for around 50 years the impact of environmental change is not always immediately apparent. In recognition of the importance and vulnerability of this specific dolphin pod, part of the Moray Firth was designated a Special Area of Conservation in 2005.

In the last few weeks the Scottish government has granted approval for the construction of two huge wind farms in the outer Moray Firth. With 326 turbines this will be the third largest wind farm in the world. WDC was involved throughout the planning process insisting that marine-animal monitoring and mitigation procedures are put in place.  Groves still sees much uncertainty. “We don’t know much about what impacts these large developments might have on the dolphin, porpoise and whale populations that live in the Moray Firth.” 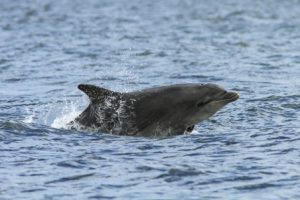 Groves notes that the dolphins are not only subject to external pressures. Natural pressures also exist. “Of the 190 known dolphins, only around 70 are female and this presents an obvious issue.” The vulnerability of the pod is further compounded by the fact that a female produces a single calf only once every three or four years. After that, she takes care of her offspring throughout that period until it becomes self-sufficient.

The Black Isle once relied upon fishing and agriculture for the survival of its communities. Now it depends upon tourism and it is evident the dolphins play a significant part in that. Groves is in no doubt. “Wildlife plays a vital part in Scotland’s economy generating £65 million per year. The iconic bottlenose dolphins of the Moray Firth alone bring in £4 million.”

Sailing back to Avoch I think of all the things that Mackenzie must have witnessed on his explorations of the North American continent and I wonder how often, during the building work on his little harbour at Avoch 200 years ago, he paused to watch the amazing “Louper Dogs” of the Moray Firth.