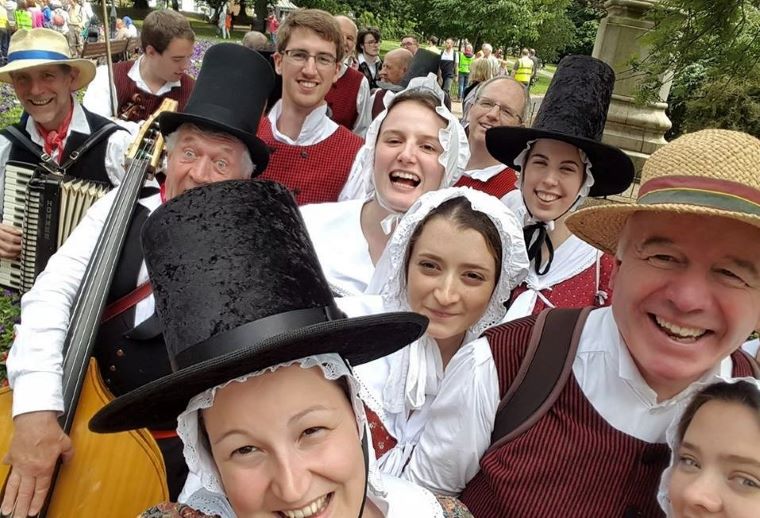 Growing up in a Welsh-speaking home on the island of Anglesey in north-west Wales, dancer Lowri Jones can’t remember a time when she wasn’t immersed in the country’s culture.

“My mother danced with the local team and taught Welsh folk dancing,” recalls the 29-year-old via email. “I was lucky that my childhood summer holidays revolved around dance trips, and it has been a recent revelation that this was not the norm for my peers.”

Jones sometimes struggled to explain the art to her friends, especially with regard to the costume – usually a shawl, a dress and an apron. However, she stuck with it, and eventually followed in her mother’s footsteps, joining the local dance team.

“This was also the year I began to learn Welsh clog dancing and that added another dimension of fun to the practice.”

“As a young person, I find that there are many other young dancers, but we are often the children of dancers. It is slightly harder to attract young adults who are new to dancing.

However, one aspect that completely defies this trend is Welsh clog dancing, which is hugely popular these days, with many looking for lessons for their children.”

Although Jones left Wales for university, she returned after her studies and now resides in the town of Caernarfon. She has enjoyed several opportunities to travel outside of the country for dance since then and remembers the “buzz” she felt performing in Poland.

“I was part of a 30-strong team performing a heavy, 45-minute program at the huge Beskidy Highlander Week of Culture. I had never seen a crowd like it – and they were all watching us!”

In 2009, she performed with the clogging squad for Y Glerorfa (Welsh Folk Orchestra) at Le Festival Interceltique de Lorient in Brittany.

“More recently, I am still recovering from another trip to France with the group. Although the stages were smaller, it is always so wonderful to experience other countries, their culture and their food.”

Jones has also taken the stage closer to home, competing at the Millennium Centre in Cardiff.

“Dancing is a social activity, and I enjoy the chance to connect with so many people, of all ages, that I may not see otherwise.”

“This applies to both weekly rehearsals, where my team has had dancers spanning in age from 16 to 80-something, as well as national events.”

Along with her personal dancing ventures, Jones is a member of the Welsh Folk Dance Society (WFDS), a decades-old organization “which supports, maintains and extends Welsh traditional dancing throughout Wales and the world.” The society has hundreds of members and recently celebrated its 70th anniversary.

The WFDS hosts two major events in Wales annually; the National Urdd Eisteddfod (for young people up to age 25) and the National Eisteddfod. Both are week-long travelling events.

“Welsh folk dance has a place in the Eisteddfod with annual competitions for solo and group folk dancers and clog dancers,” says Jones, noting that National Eisteddfod boasts 150,000 attendees over the course of the festival. In addition to dance, there are competitions spanning everything from folk singing, recitation and cerdd dant, which she describes as “a unique form of Welsh singing to the accompaniment of a harp, where the singer and the harp have different tunes.”

She adds that the Welsh folk dance scene has a welcoming, family-like feel. And, although the challenge can be motivating oneself to practice – especially when there isn’t a specific event for which to rehearse – the payoffs are connection, companionship and adventures.

In the future, Jones would like to see greater support for dance, and traditional Welsh culture in general.