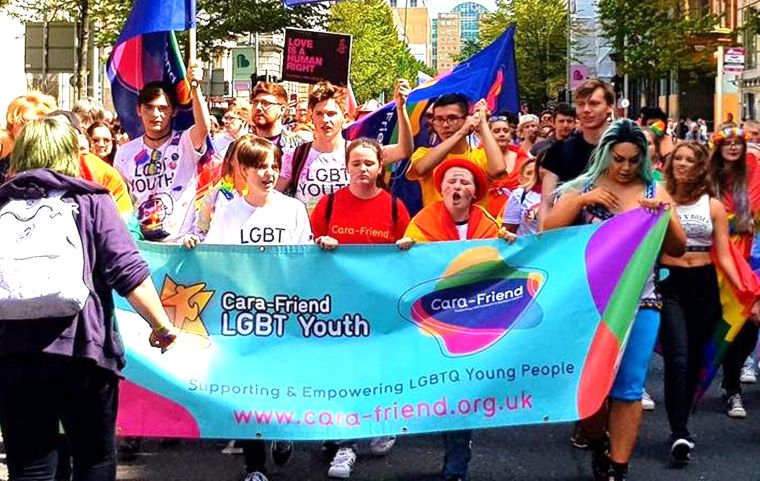 Before and after Adam Murray “came out” as gay, he struggled with depression and shame. “I had lost friends who were belittling and unsupportive, and eventually began drinking heavily while at university, spending all my time in gay bars trying to find new friends,” he recalls via email to Celtic Life International.

As luck would have it, he met a young woman named Bronagh in one of those bars, and she introduced him to Cara-Friend – a group that aims to support LGBTQI+ people in Northern Ireland. Cara-Friend has been around since 1974, before homosexuality was even decriminalized in the nation. Today, the organization has eight professional staff members and participates in advocacy, campaigning, policy and more.

“Bronagh said Cara-Friend was a great place to meet other people like myself, so I began to attend the group,” shares Murray. “For a long time, I would sit in the corner and not talk to anyone, it was such a culture shock! But when I did start to feel at home in the group, I began to gain a lot of confidence and have never looked back.”

Murray eventually took on a volunteer role with Cara-Friend, which led him to his part-time job as an admin officer. Now, a decade later, he works full time for Cara-Friend as its Community Development Manager and Office Manager. “I couldn’t be happier to be working for an organization that helped me to become the confident and proud gay person I am today.

“Cara-Friend began life as a listening ear service and a helpline,” he continues. “And our LGBTQI+ Switchboard continues to support the community every week, via telephone, email, and online chat.”

However, there are a wide range of other supports on offer as well. LGBTQI+ domestic abuse support, youth services and awareness trainings are just a few of the options that Cara-Friend provides. 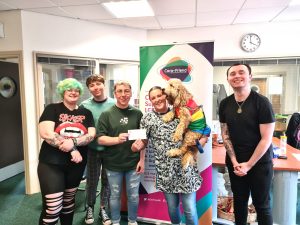 Murray notes that while there have been “big wins” for LGBTQI+ folks in recent years (such as the right to adopt, get married and donate blood), there are a still a multitude of issues facing the community. For example, young people often have to deal with homophobia, biphobia and transphobia at school. Murray also points out how difficult it is for transgender people to navigate the health system. “Many trans members of the community are languishing on waiting lists for years.”

“One big change in recent years is that members of our community are coming out more, and often younger, than in previous years. This has had a snowball effect, as more families, schools, businesses, and communities realize that they include LGBTQI+ people they love and value. Whilst homophobia, biphobia, and transphobia still plague our society in many ways, including hate crimes and violence, we are seeing huge public support and awareness grow every year.”

It is important not to take these successes for granted. At the same time, people and organizations such as Cara-Friend must continue to push for improvements. For instance, Cara-Friend is involved with the Ban Conversion Therapy NI Campaign: a movement with the goal of ending the practice of forcing LGBTQI+ people to live as heterosexual and/or cisgender. The hope is to put a legislative ban on this so-called “therapy.”

“There are still many ignorant perceptions about our community which exist in society,” says Murray. “This is especially true when it comes to trans, non-binary and gender diverse members of our society. The media and politicians have an important role to play to combat prejudice and discriminatory views but, sadly, too often it is the media or politics which promotes negative and harmful perceptions. There is still a lot of work to do, but we are committed and energized to improve the situation.”

The COVID-19 pandemic has impacted how Cara-Friend can deliver its services, but Murray says the organization has adapted. As for the rest of 2022, the organization will have to play everything by ear. One thing is certain, however – “We will continue to help lift the voices of LGBTQI+ people, and advocate for our community’s equal treatment and respect.”