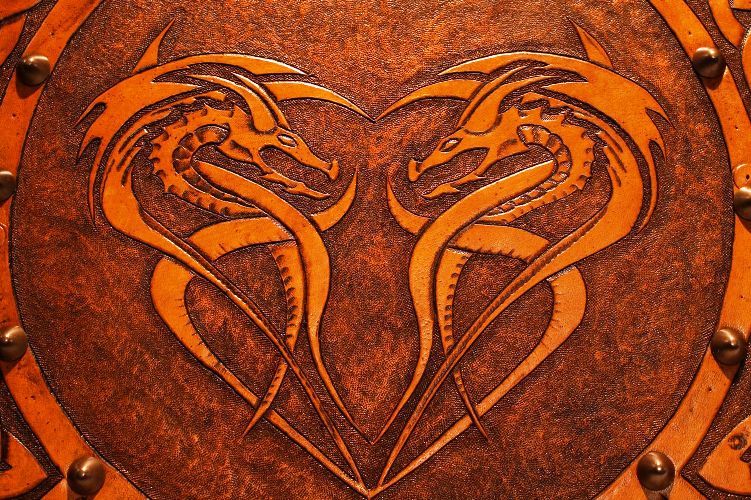 With this season of Celtic festivals in full swing, Mike Pruette – founder of Celtic Leatherworks – is excited to have his historically-inspired Scottish weaponry and leather accessories on the market.

Pruette has partnered with a team of event vendors to bring his handcrafted products to Highland festivals, Renaissance fairs, and events all over the United States.

And, in a year that has marked a real turning point for his business, he has also begun working with Albannach, the Scottish band whose intense, percussive sound inspired him while he strove to get his venture off the ground.

“I make leather merchandise for them now,” says Pruette from his base in Charlotte, North Carolina. “It is a bit of a fairy tale come true for me.” 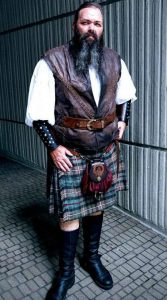 “And, with the addition of the event vendor team, my products are now available in person to more people than I ever imagined possible.”

Pruette founded Celtic Leatherworks in 2010 after getting the sense that life was leading him in that direction – he simply couldn’t shake the feeling that he should be wearing a kilt. So, he embraced his heritage and ordered one. It arrived three days before he attended his first Highland Games.

“One of the Clan Tents had a Highland Targe and I fell in love with it. It was almost like the past was calling out to me. Right there on the spot, I decided I would be making myself one.”

A visit to the nearby music tent was the next piece of the puzzle.

“Albannach blew me away. The raw energy they exuded was irresistible. I bought three of their CDs and headed home.”

For the next six weeks, Pruette cranked Albannach’s tunes as he created his first Targe and sporran.

Today, he handcrafts and hand-finishes all the pieces in his workshop – often with his teenage kids learning alongside him. He designs and patterns his own product lines, creates most of his artwork, and sometimes commissions special pieces from Celtic artists when he has an idea he can’t develop alone.

His products also sell in retail establishments, including Laughingbrook, Spellcrafting & Ancestral Arts, and Near & Far Scottish. He has expanded his client roster to other Celtic artists and musical groups, including Celtic Hammer Club and Sÿr, as well.

“These days, I limit my custom orders to a select few clients and I work hard to keep the booths and website inventory stocked. Smaller items like barrettes, armbands, and belts keep a constant revenue stream flowing that allow me to indulge in the Targe making I truly love.” 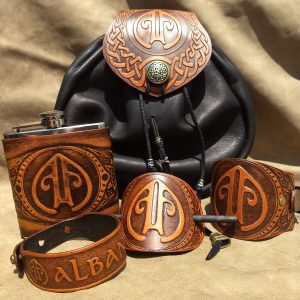 “Being there from beginning to end and holding a finished piece that I can be proud of is what keeps my heart in this work.”

Going forward, Pruette would like to see other authentic creators give each other more support as he has struggled to find genuine Celtic products in a crowded marketplace.

“I am constantly trying to source hardware and components for my bags and other lines and it can be pretty discouraging at times.”

In the age of social media, there are many ways to market goods, but he sometimes feels disconnected from other creators.

“In a perfect world, I would love to see a complete, free directory of Celtic-oriented businesses and artisans. That would make it easier to spend my dollars where I know they will go towards sustaining this community of makers.”

As if the plate wasn’t full enough, Pruette is also working on expanding his online customer base. He is remodeling his workshop and developing new product lines as well.

It may sound like a lot to chew on, but he loves his work.

“There are an incredible number of daily challenges and complications in running my own business, but they pale in comparison to the satisfaction of preserving these ancient crafts in my own hands-on way and adding my personal work to the collective history of Celtic arts and leatherwork.”