Thanks to the influence of his grandfather, Tom Conroy began dancing at the age of 8.

My grandfather in Ireland had done the old style (or sean-nós) dancing,” he shares via email, “and the tradition somehow carried on through the family; one cousin living in Chicago studied dancing with Michael Flatley when they were both kids, and another cousin living in Milton Keynes taught me some basic steps.”

Upon learning of a proper dance school in his hometown of Lincoln in the English East Midlands, where he still resides today, Conroy “couldn’t wait to get started,” he recalls.

Over the next few years, the youngster studied with Caroline Devaney of The Devaney School of Irish Dancing, who had a profound influence on his artistic evolution.

“She would often just dance in class to teach, and she really encouraged her dancers to perform by organizing lots of shows for the public.”

Now 30, Conroy has been dancing professionally for 13 years. He placed third at the British National Dance Championships in Blackpool when he was 16, and within a year he was touring on an international scale. His first show was with Irish dance group Gaelforce Dance in Tallinn, Estonia, where he estimates that 8,500 people were in the audience.

“I was 17 when I joined the troupe, and 3 weeks after beginning rehearsals – and injuring myself – we started a two-month tour of eastern Europe, and then Taiwan a few weeks later. It was the start of some amazing dancing memories.” 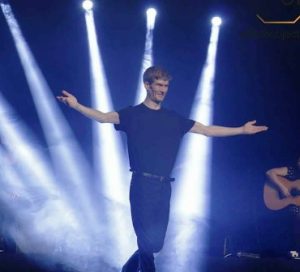 Since then, he has toured with several shows, including Ontario-based The Magic of Ireland, which has taken him to France, Germany, Belgium, and Denmark. Later, when Gaelforce started touring a new production called Dance Masters, he found himself back on the road.

Conroy made the move to Dublin in 2008, living there for several years. During that time, he performed three times a day, seven days a week in hotels and bars for a show called Celtic Rhythm.

With all the heavy leg work, his style evolved naturally over time.

“When competing, I was strictly traditional step-dancing. Now when I perform I am a lot more relaxed – almost like sean-nós – and try to mix different styles of percussive dance, including tap.”

“As such. the rewards of the vocation have changed; before I was performing for places at competitions, while today I perform simply to entertain people.

“And seeing children watching you dance with admiration is much more rewarding than any trophy or medal from a feis.”

Conroy is now back in Lincoln, where he has worked as a professional dance teacher for the last three years. The calling comes naturally to him; as a teenage student, he enjoyed helping his instructor with her young students.

These days, his own pupils “consist of some older girls who used to dance with my teacher, some beginner adults, and a number of younger ‘new’ dancers.”

He notes that most of his students are surprised by the amount of work that is involved in practicing and competing. As it was for himself as a young dancer, however, all that hard work eventually pays off.

“I have had one dancer rank fourth in the world championships, and another who ranked twelfth in their respective age groups. My students can expect a lot of rhythm and clever timing in their dancing, a lot of fun during classes and other activities, as well as opportunities to perform at local events such as St. Patrick’s Day gigs, festivals, fairs, and more. No matter what their age or ability, I am very proud of all of them.”

In addition to teaching, Conroy also wants to do more to promote Celtic culture in his home community.

“I am hoping to increase the popularity of Irish events in the city, and perhaps even start an Irish society. A Saint Patrick’s Day parade would be a great addition also.”

His partner, Sinéad, has also started dancing, and the plan is for Conroy Irish Dance to become a family business – “with our future family all being dancers.”

“Blame it all on my grandfather,” he smiles. “If it weren’t for him, we wouldn’t be doing what we do now…”