Choirs with Purpose and MND Scotland 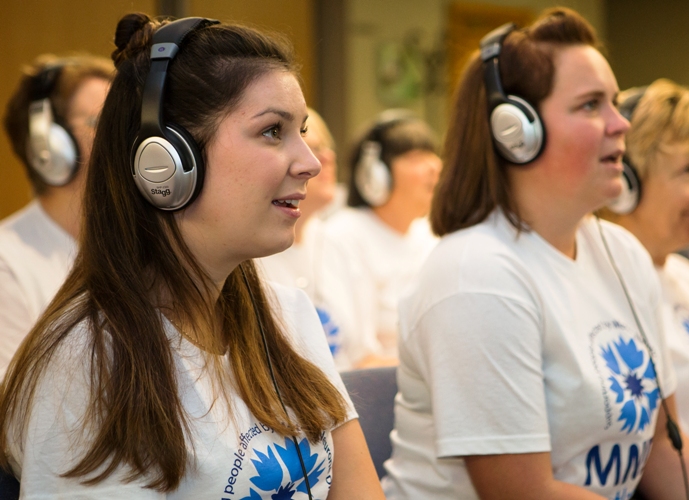 With a little help from new found friends, one Scottish woman is making beautiful music this Christmas.

Wilma Catton was a friend of my wife. They had known each other for years through work, and I had the good fortune to meet her on a number of occasions. She loved life and was a fun person to be around. In August 2013, at the age of sixty, she was diagnosed with Motor Neurone Disease (MND).

MND is the collective name for a group of rare illnesses that damages the nerves – motor neurons – responsible for carrying messages from our brain to our muscles. With no cure, the disease frequently results in slow paralysis, gradually taking away the sufferer’s ability to walk, talk, eat, swallow and breathe. Wilma was the first person we knew with the ailment. It had a devastating effect on her family as – over the next seventeen months – she lost the ability to talk and swallow, and suffered widespread muscle wastage and gradual respiratory failure as the disease progressed. She passed away in January of 2015.

A few weeks ago I watched a BBC Scotland documentary about the youngest MND sufferer in Scotland. Most MND cases surface in later life, but Lucy Lintott was just nineteen when she received her diagnosis. Her moving story was told in MND and 22-Year-Old-Me. Filmed over six months, the film followed Lintott as her illness progressed, recording her thoughts, emotions and the increasing restrictions imposed upon her by the condition. There were moments of sadness, but what shone through was Lintott’s bubbly, fun personality, and the way she refused to be defined by the illness. Her infectious laugh and sense of hope stayed with me long after the program ended. 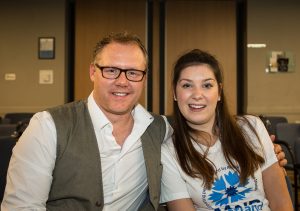 James Hawkins and Clare Cook are the team behind James Hawkins Music. They also saw and were moved by MND and 22-Year-Old-Me.

In a world often beset with troubles and pessimistic news, they believe that there is a power in music that can have a profoundly positive impact.

Hawkins is a multi-instrumentalist, composer, arranger, performer, producer, and the musical director of the team. Cook is the public relations and marketing expert, and understands that visibility is an essential tool in an extremely competitive music business. Together they deliver powerful music projects with a sense of purpose and outreach. In conjunction with the charity Missing People, they created The Missing People Choir, propelling them to the semi-finals of Britain’s Got Talent in 2017. They have also worked with The London Hospices Choir and The Military Wives amongst many others. When Lintott’s documentary was aired Hawkins and Cook were busy working on a new project – Choirs with Purpose.

Choirs with Purpose brings together vocal ensembles from across the U.K., including the Missing People Choir, NHS Choir, and the incredible Parrs Wood High School Choir, which had performed with Ariana Grande at the One Love Manchester concert following the tragic bomb attack this past spring. For several months Hawkins has been working with singers across the U.K. to record ‘Stand Together’ – a Christmas charity album.

Each of the twelve choirs featured on the album will sing a cover song, and collectively the 1600 singers – who have been recorded at various locations – will also sing a reworking of Sir Paul McCartney’s ‘We All Stand Together.’ McCartney has given the album his personal backing and has waived all royalties on the song. It is an album of hope and inspiration.

The last of the twelve choirs for the album was born from Lintott’s story. The Choirs with Purpose team approached MND Scotland about assembling a choir for the project. Following a Facebook appeal for singers with connections to the cause, 140 names were gathered.

On Saturday, October 14, in a hotel conference suite in Glasgow that had been converted into a recording studio for the day I met Lintott, Hawkins and Cook, and the members of the newly formed and aptly named Lucy Lintott/MND Scotland Choir. There were several rows of seats, each with a personal headset. Hawkins’ desk, computer, and an array of microphones lined the wall in front of the singers; he and Cook had been there for several hours already, setting up the space. Despite all of the technical equipment, however, the room had an atmosphere of fun and friendliness and there was much hand shaking, hugging and drinking of coffee as people arrived. Unlike many recording environments, it was informal and relaxed. 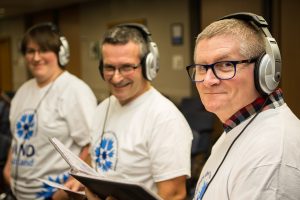 In an atmosphere of great conviviality, the sopranos got the day’s rehearsals underway at 10.00 a.m. This was followed by the altos at 2.00 p.m., and the tenors and basses at 6.00 p.m. The session ended well into the evening. It was an experience to watch Hawkins bring a choir together through fun, play, musical exercises, and recording. Lintott had selected the ensemble’s individual song; written by an American teenager who had been diagnosed with osteosarcoma – and given a year to live – the piece was a great source of comfort for Lintott.

“I chose the song Clouds, by Zach Sobiech, because when I was first diagnosed it really helped me through the difficult times. I can relate to Zach so much and this piece is one of my all-time favourites.”

Lintott, who admits to being tone-deaf (“but up for giving it a go”) sang with the choir, and her infectious laughter throughout the day reminded everyone why they were there. If the day was tiring and stressful she certainly wasn’t showing it, and when she wasn’t laughing out loud, she was smiling,

“Every time I hear the song I smile because, to me, it is the soundtrack to my diagnosis. It makes me feel safe, and reminds me that I am not in this fight alone and that wonderful things can come from the darkest of days.”

Only a few months earlier Lintott had recorded her speaking voice so that it might be used in a voice synthesiser should she need it down the road. It was inspirational to see her taking part in the recording. During a break in rehearsals I had the chance to talk with her and she asked me to thank the Celtic Life International community for its help in reaching a wider audience.

Hawkins understands the power of music and how it reaches, connects and supports individuals and communities, “Where words fail, music speaks – which is why we wanted to form a choir to raise awareness of the condition and spread Lucy’s message further.” 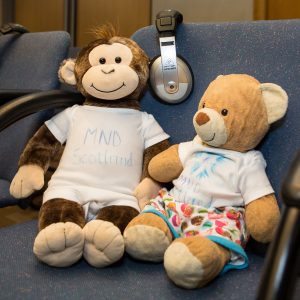 There are many people living with illnesses and struggling to cope with difficult circumstances. The album, Stand Together, has the ability to reach thousands of people and to raise much needed funds at a time when many charities and organizations are struggling financially. But, perhaps more importantly, it gives sufferers, their families and friends the opportunity to support each other, and to find moments of joy in the darkness that can so easily pervade the modern world.

In the spirit of sharing and supporting, all profits from the sale of Stand Together by Choirs with Purpose will be divided equally amongst the causes that each choir represents. Money raised for MND Scotland will be used to increase awareness of the illness, support those affected by it, and also to fund research to understand the disease better and to seek a cure. Stand Together was released on December 15.

For a full list of the choirs and organizations represented, and to pre-order your copy of Stand Together, please visit www.choirswithpurpose.com. The album, which already has over 2,000 pre-release orders, can be purchased as a CD that will be shipped internationally or as a download. Your support for this amazing, collaborative project can make a difference to a lot of people like Lucy Lintott. My wife is certain that her friend Wilma would approve.