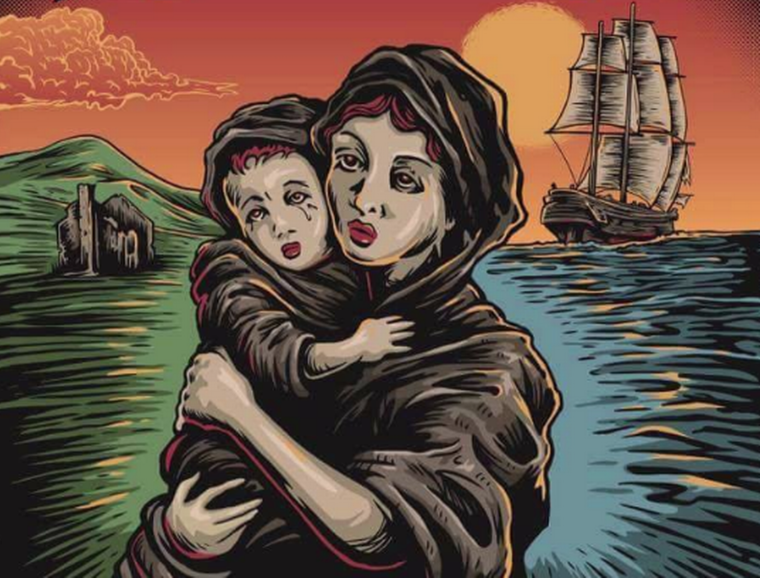 Last June, scientists confirmed the identification of the human remains found on the beach at Cap des Rosiers, Quebec. They had come from the 1847 shipwreck of the Carricks of Whitehaven, a famine ship that had sailed from Sligo on the west coast of Ireland. Bound for Quebec City, the two-masted vessel had been approaching the mouth of the St. Lawrence on April 28 when a fierce storm came up, drove the wooden ship onto a shoal, and smashed her to pieces.

Now, more than 200 years later, Parks Canada anthropologists confirmed that the remains – bones and skeletons uncovered by storms mostly in 2011 and 2016 – were indeed those of Irish men, women and children who had sailed on the Carricks during the worst year of the Great Famine.

As I tracked the story from my home in Toronto, I could imagine the terrible demise of those last survivors all too vividly. Less than one month before the story surfaced, I had gone aboard two replica famine ships in Ireland – the Jeanie Johnston in Dublin and the Dunbrody in New Ross, County Wexford. And in 2018 I had explored the replica of the Hector in Pictou, Nova Scotia, which famously sailed from Scotland in 1773 – decades before the term “coffin ship” was coined. In size and weight, the 200-ton Hector was closest to the 242-ton Carricks.

At 301 tons or more, the three-masted Jeanie Johnston was significantly larger. On deck, the JJ was 123 feet long and 26 feet wide, with a draught or pass-over depth of 15 feet. The original ship, built in Quebec in 1847, had two diesel engines in addition to sails. But according to tour guide Sean Gilmore, the vessel was dead slow, “Once, in a race with 65 other ships, it placed 60th.”

The two main killers on these voyages were cholera and typhus.

Cholera was transmitted by fecal matter in the water, “If you got it, you were dead within 48 hours.” Typhus brought a slower and more miserable death, carried by lice-infected rats.

The Jeanie Johnston went down in October 1858 when, crossing the Atlantic with a cargo of timber, she became waterlogged. The crew climbed into the rigging and hung on as the ship slowly sank. On the ninth day, as things grew desperate and with no fresh water, a Dutch ship happened by and rescued all hands. “Why were they saved?” Gilmore asked rhetorically. “Because no one ever died on the Jeanie Johnston.” 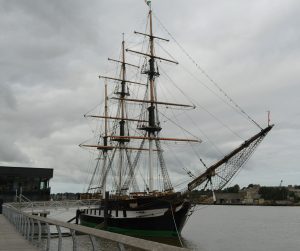 The same cannot be said of the Dunbrody, the largest of the three replica ships I visited. Built in Quebec as a cargo vessel in 1845, it was 176 feet long, 28 feet wide, and weighed 500 tons – more than twice the Carricks. Sailing out of New Ross during the famine years, the Dunbrody carried an average of 200 passengers, though in March 1847, it sailed to Manhattan with 313.

Steamers operating out of Liverpool could reach North America in two weeks. However, these famine vessels usually required six to eight weeks, during which passengers survived on oatmeal, rice, ship biscuits or hard tacks. Two small cabins on the Dunbrody gave first-class voyagers some privacy, but most passengers were crammed into 40 bunk beds that were six feet square and made to accommodate four to eight people each.

Designated individuals were allowed on deck thirty minutes a day to cook. The dozen or so crew members ate better than the passengers – salted pork, beef, lime juice, eggs from caged chickens – as they constituted the living engine that drove the ship, working four hours on and four hours off. One of the highlights of visiting the Dunbrody comes below decks, when two women actors take on the characters of historical personages and tell their stories.

That of the widow Mrs. Anne White, who cradles a newborn baby in her arms, is especially moving. With her husband and their five children, the family walked 60 miles to New Ross, then spent more than seven weeks in below-decks misery. Her husband died, but she made it to Montreal where the Grey Nuns took some of her progeny and placed them with French families. Those children were the lucky ones. The Dunbrody ran aground in the 1870s and broke up, but the bell on the replica is from the original ship.

The vessel nearest in size to the Carricks of Whitehaven was the older ship Hector, best known for its 1773 voyage from Scotland to Pictou, Nova Scotia, where today a replica is moored at Heritage Quay. The original was already in rough shape when she collected passengers at Loch Broom, and those who went aboard found they could scrape slivers from her rotting hull with their fingernails. The Hector had three masts but was just 85 feet long and 22 feet wide. She weighed 200 tons and sailed with 189 passengers – 23 families and 25 single men. To say that the ship was overflowing is a gross understatement.

In 2018, while visiting the replica, I descended the ladder into the hold and stepped to the middle of the ship where, at just over six feet in height, I could at least stand upright.  I could hardly believe my eyes. What with the captain, the two mates, the sail maker, the carpenter, the cook, several seamen and three soldiers, 200 people were crowded onto the vessel. Most of them spent the voyage confined here below decks, jammed tight. Men, women, and children – 30 of them under two years of age – slept on rough pine boards with twenty-four inches between each rack. Eighteen people died during the 1773 crossing, most of them children.

Passengers received insufficient food and water and death rates would often reach 30 per cent. Sharks would follow the ships because so many bodies were thrown overboard.  Britain would not enact legislation to protect emigrant passengers until 1803, and for decades unscrupulous ship owners continued to provide too many people with too little to eat. Hunger was far from the worst of it, however.

Imagine being crammed with almost 200 people into the squalid darkness below decks.

No portholes, no toilets, just honey buckets or pails. No privacy, just a constant stink of urine, vomit, and excrement. Try to ignore the countless rats. As the ship emerges into the open Atlantic it begins to heave and roll. More and more passengers become seasick. People are groaning with dysentery, vomiting and defecating in the darkness. Children are wailing. And always there is the stench – already intolerable, ever-worsening. Now comes cholera, typhus, and smallpox – the last an epidemic which brings fever, thirst, aching limbs, and more dysentery. Children start dying and parents weep as they consign dead babies to the deep. 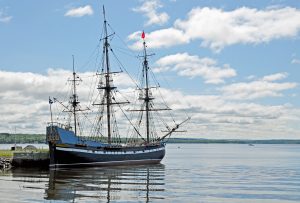 Such were the coffin ships that sailed even 74 years after the famous voyage of the Hector, when in 1847 the two-masted Carricks, already 35 years old, sailed out of Sligo. The 176 passengers who departed late in March were among 2,000 starving people driven onto ships during the Great Famine by Henry John Temple – aka Lord Palmerston – whose Irish estates encompassed 20,000 acres and 14,000 tenants. Palmerston, then British foreign secretary and later a two-term Prime Minister, insisted that “any great improvement in the social system of Ireland must be founded upon…a long continued and systematic ejectment of Small holders and of Squatting Cottiers.”

On April 28, a blinding snowstorm drove the Carricks onto a shoal and smashed her to smithereens just four miles off Cape des Rosiers. Captain R. Thompson later reported that nine passengers had already died during the voyage. Another 119 died as a result of the wreck – most of them drowning, trapped in the hold – leaving 48 survivors. Of the 13 crew, all but one cabin boy survived by clinging to masts and spars in the storm-tossed sea. In total, 60 survivors stumbled onto the beach where farmers rushed to assist them.

In 2011, 164 years after the disaster, locals walking the beach found the remains of three Irish children, one as young as seven. Three years later, forensic scientists determined that the partial skeletons were “probably victims of the wreck of the Carricks.” More remains turned up on the beach in 2016. They were in better condition and, earlier this year, Parks Canada confirmed that the bones from 21 skeletons came from the Carricks. Analysts determined that the dead had eaten a diet typical of the rural Irish – lots of potatoes – and many had suffered from disease and malnutrition as a result of the famine. In July 2019, Canadian and Irish officials held a ceremony and reburied the remains.

During the Great Famine (1845 to 1852), more than one million Irish died in their native country, some of starvation but most of diseases to which “the great hunger” gave rise. Another million at least boarded the famine ships. Today, almost five million Canadians claim Irish heritage, while in the United States, that number is more than 35 million. ~ Story by Ken McGoogan

Ken McGoogan has just published his fifteenth book ~ Flight of the Highlanders: The Making of Canada.