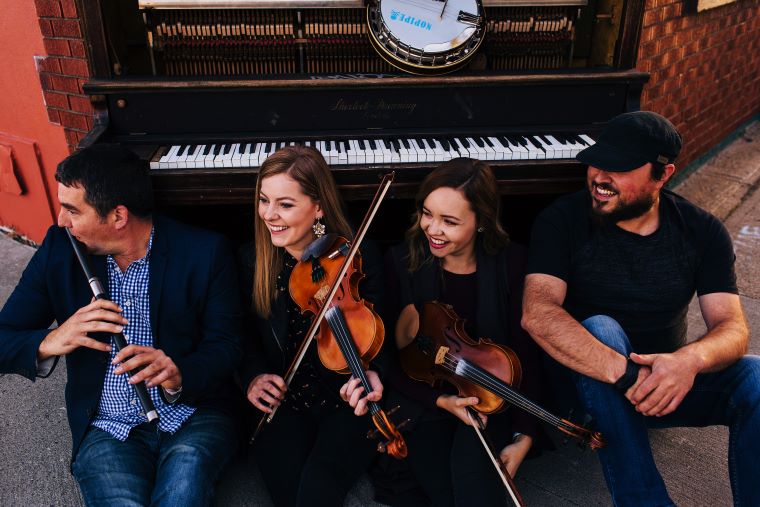 “At the time we were all solo acts playing at the festivalt,” shares fiddler Chrissy Crowley via email. “The idea was that we would take turns during the show, backing each other up as we went around the stage, with each person getting the spotlight. We just had so much fun playing together that we decided to keep doing shows as a group whenever we could.”

It wasn’t long before the quartet made it official. Along with Crowley, band members include multi-instrumentalist Darren McMullen, fiddler and vocalist Rachel Davis, and pianist Jason Roach.

“We all contribute tunes to the sets,” explains Crowley. “We all write and arrange songs together, as opposed to the original format where one person would develop their own sets of tunes and have others ‘play along.’ The vocal aspect of the band has also grown; now, about 40 per cent recordings and live shows feature vocals.”

“There is certainly a strong traditional Cape Breton element to the band. We have both female and male lead vocalists, and both English and Gaelic songs on the record. There are a lot of different musical ingredients we can work with. 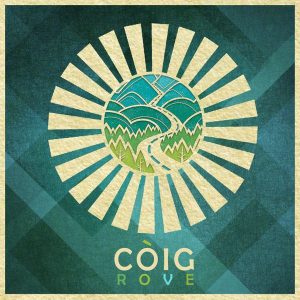 The band’s first album, Five, was released in 2014, and picked up Album of the Year honours at the 10th annual Canadian Folk Music Awards. A Christmas album titled Carols followed in 2015, and a full-length album titled Rove arrived in 2017.

“There wasn’t a particular theme in mind to the music, it just happened naturally,” explains Crowley of the 12-track production. “We saw how quickly everything came together despite the music having so many different influences, so in hunting for a word that described this, we found Ashlar. Ashlar is a type of masonry where rocks of a different size and shape are refined and fitted together. It described the album, where we are varying between themes and genres, but each song fits together. We go from darker folk tunes like Deep Down in the River, to these ‘raise the roof’ Celtic instrumentals like Time and Tide. The moods are varied, yet it’s all ‘Coig’ and it all works.”

Crowley admits that piecing the production together was not without its challenges.

“For this record we tried to write more than we had in the past, which leaves less room for ‘trad’ tunes. Sifting through ‘trad’ tunes and deciding which ones not to play was tough. With four melody players in the band, it doesn’t take long for the list of song options to get quite lengthy.

“You get pretty close to the material throughout the recording process, and quite often get very picky about it,” she continues. “It can be easy to get wrapped up in so many little details surrounding the recording, the graphics, release dates, upcoming concerts, and so forth.”

Despite those issues, the rewards are immense.

“We often get messages from folks telling us which tracks their favourites are, and which remind them of home. It feels great to know people are listening and enjoying what we have worked on.”

Although Crowley believes that Celtic music is here to stay, she is concerned with the state of Celtic languages.

“Great incentives have been taken up by both Nova Scotia and Scotland to promote and preserve the language. Nova Scotia has an Office of Gaelic Affairs, which includes Bun is Bàrr (a Gaelic mentorship program) and Gàidhlig Le Luathas, which is full Gaelic immersion. We would love to see more of these programs and more overall inclusiveness. Bringing awareness to the language and making sure these programs are welcoming to everyone is what will ensure Gaelic remains a vital part of the Celtic tradition.”

The band is currently gigging across Canada, the U.S. and Europe.

“By the end of this year we will have a new Christmas record to release, and we have already started booking shows in Europe and Australia for 2020.”