“Funny you should ask about that,” smiles the Orlando, Florida-based fiddler and tin whistler who originally hails from Manchester, U.K. “I wrote most of my last album on the whistle in the bathtub.

“My dad is from Kilnaleck in Co. Cavan and my mum is from Menlough in County Galway,” Farrell continues, adding that he has been playing the whistle since he was a wee tot of seven. “I have four brothers and sisters who all play music. We spent our summers in Ireland where we competed in the Fleadh Cheoils.”

Farrell holds a degree in civil engineering from Leeds University, but realized along the way that fiddling was his future, later acquiring a Masters in Traditional Irish Music from the University of Limerick. However, his most important musical mentors were not his professors in college.

“My parents began taking us all to lessons at a young age, and it was the teachers that truly inspired me. My fiddle teacher was Paddy McMahon from Loughrea in Co. Galway, and Michael McGoldrick taught me the whistle. It was Michael that has probably been my biggest influence. He was always very encouraging and positive, and he has gone on to become one of the most revered musicians in Irish traditional music.”

Since coming to the U.S. (and recently patriating!), Farrell has collaborated with many traditional Irish music artists, including touring with the Celtic band Lúnasa, and performing alongside some of his favourite artists, including Tim O’Brien, Natalie Merchant and Mary Chapin Carpenter. He also recently recorded the album Music and Mischief with flutist Kevin Crawford and guitarist Patrick Doocey. 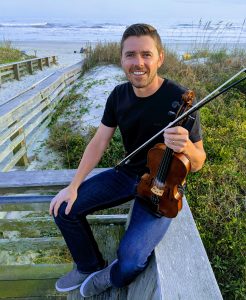 As much as he appreciates the “trad” in “traditional Irish music,” Farrell is not afraid of forging new ground, and has been working on some more novel projects.

“Growing up, I played in ceilidh bands with singer-songwriters, Celtic rock bands, and Irish country & western bands – all of which has shaped my style and sound. I think I have my own approach to the music, but I also think there is less talk of regional styles nowadays, due to technology, and people doing a lot more traveling.”

One of his more eclectic endeavours brings us back to his tub-thumping tunes.

“This year I have challenged myself to do an original tune every day for the year.”

“You can follow my shenanigans on YouTube, or my Facebook music page: Colin Farrell Music. Luckily, I really enjoy writing music and melodies come to me fairly easily so hopefully I will complete the task.

“I am also part of an exciting new project called The Crannua Collective, featuring several incredible musicians. We have just released a new CD of all-original songs and tunes, so I am quite excited to see where this project goes.”

Farrell has some ideas on how to get younger musicians into trad, and he is optimistic about the future of his craft in the hands of the next generation.

“I am always amazed when I go home to Manchester, or across to Ireland, that the standards among all the young musicians are so strong,” he adds. “The same can be said for the young players in North America. I’m lucky enough to teach at numerous camps and festivals around the U.S., and the standard and enthusiasm of the young people is really encouraging for the future of the music.

“The numbers are very strong in terms of the amount of people playing Irish Traditional music, and in Ireland there are a lot of cultural grants that are available to musicians which is a real help. In terms of the U.S., it can be a little bit more difficult to find depending on your area, but there are large communities of Irish musicians all over North America keeping Celtic and Irish music alive.”