When asked about his biggest musical influences, fiddler Don Roy points to home; his uncle Norman placed a guitar in his hands when he was just six years old. Nine years later, it was his uncle Lucien who gave him his first fiddle, taught him to play, and helped him to get involved in regional contests.

“The love of the music is what got me started and continues to inspire me today,” shares Roy, who currently acts as music director of Fiddle-icious: Maine’s largest fiddle orchestra. “That, and the desire to pass it on – to keep fiddle music a living thing.”

Outside of his own family, Roy – who has been described as the dean of Franco-American fiddling – has drawn inspiration from the likes of Graham Townsend, Jean Carrignan, and Paul Cormier (AKA Monsieur Pointu).

“I would stack six or seven albums on the record player every night and let it go as I went to sleep,” he recalls. “Sometimes I would put the device on sixteen speed to figure out the tune. Today I listen and continue to be influenced by many of the same players that initially caught my attention decades ago. There are many young players now who perk up my ears too.”

Over the years, Roy has played with a bevy of bands, including the Maine French Fiddlers (earning him a place onstage at Carnegie Hall), as well the Don Roy trio, in which he is joined by his wife Cindy on piano, and bassist Jay Young.

He received Individual Artist Fellowship Awards from the Maine Arts Commission in 1994, 2001, and 2008, and has also received the Harold Carter Memorial award for country fiddling. 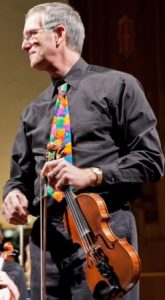 Roy’s largest project, Fiddle-icious, is heading into its 15th season.

“We accept all levels of musicians,” he explains of the 140 member troupe. “Our aim is to preserve the cultural heritage of Maine’s traditional fiddle music. At our bi-monthly meetings, we join together to learn traditional tunes, dances and songs passed down from our Scottish, Irish, Quebecois, and Acadian ancestors.”

As an open, community-based orchestra, people can drop in to sessions and learn a few tunes without committing to any performances. Roy even writes simpler harmony lines so beginners can easily find a place in the group.

“Some folks travel over an hour or more to come to rehearsals. People find out about us from seeing a concert, or by visiting our website or our Facebook page, and also by word-of-mouth. Many of our members pitch in with the tasks of running our organization and, over time, almost everyone picks up a volunteer job at some point.”

Every year, Fiddle-icious plays four concerts at the end of October. Performances are typically concentrated in southern Maine, in such locales as Bethel, Farmington and Biddeford. This past year, the group made its way to Topsham, South Portland, Gorham, and Lewiston.

“Our audiences are very enthusiastic. You see a lot of smiles and toes tapping. The music brings back good memories for many older people. I get 80-year-olds talking to me about their grandparents playing the fiddle. I like it when people tell me its happy music.”

Along with being a musician, instructor and composer, Roy also plies his passion into woodworking. His love of music and crafting came together when crafted his first fiddle in 2001.

“I play instruments that I have made myself. If I owned a better instrument built by someone else, I would play it.”

Roy makes instruments for others as well, and sells to people all over the U.S. He believes that the fiddle has been experiencing a revival of sorts – largely thanks to the internet, and particularly, YouTube.

“In the last 10 or 15 years, young fiddlers are able to experience and learn from other young fiddlers online. That’s made a world of difference keeping the heritage alive. I see it here at home.

“Celtic culture is very active here in Maine. There are festivals, and workshops, and camps, and lots of teachers. Contra dancing is really big across the state, and many young people find their way into the music through that avenue also.”

Roy admits that there is still work to be done, however. “Having places for people to play together is key to having them pick up an instrument. I mean, that is how Fiddle-icious got started. The members enjoy being part of a community that brings joy and purpose to all who participate – all while keeping the musical tradition alive and thriving.”