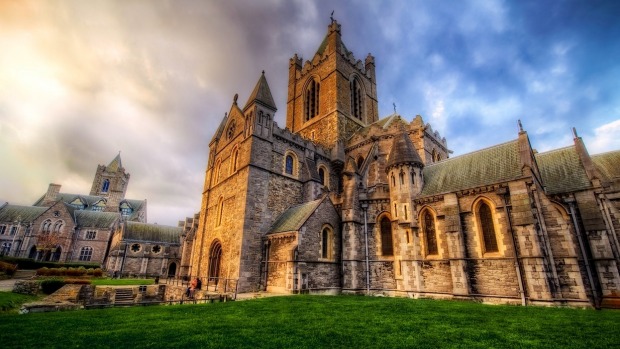 For travelers, Dublin is both manageable and comfortable. With an immediate population of just over 500,000, and a pace that is of equal measure, it is a city of scale: minimal traffic and clear, well-marked pathways for pedestrians make its many quaint quarters friendly for both cyclists and for those on foot.

These days, the heart and soul of Dublin’s commercial sector – Grafton Street – is quieter, however some still browse brand names in both big-league boutiques and mom-and-pop shops. Many are students at nearby Trinity College.

Established in 1592, Trinity College remains the brain-center of Ireland’s educational system. The world-renowned institution’s alumni include a long list of notables, and it continues to graduate top-shelf politicians, scientists, business and medical leaders, artists and authors. Once the sole and strict domain of the country’s citizens, the facility now hosts a flood of foreign accents.

Particularly popular with those students – and with tourists – the neighbouring Temple Bar district is a mish-mash of old and new; long-established pubs and shops sit aside contemporary boutiques and restaurants, while traditional Irish music – or “Trad” as it is now known – spills out into the street, blending seamlessly with modern rock, pop and EDM. 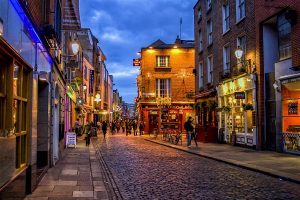 It is here, of course, that many of the city’s great sonic pioneers first took to the stage, including the likes of The Dubliners, The Wolfe Tones, Liam & Clancy, Thin Lizzy, The Pogues, U2, Sinead O’Connor, and – more recently – chart-toppers Damien Rice and Hozier.
While Temple Bar speaks to more recent history, two nearby monoliths – Dublin Castle and Christ Church Cathedral – testify to the city’s long and rich heritage.

Built in 1205 AD, Dublin Castle sits atop the city’s highest ground, commanding a view from east to west, and again from north to south. Once the crown jewel and throne to the region’s landed gentry, the old walls are still steeped in noble history. Through the years, massive restoration and renovation projects have kept the castle current, and modern amenities are available to the influx of travelers and pupils that tour the premises daily.

Similarly, the close-by Christ Church Cathedral is a major attraction to locals and visitors alike. Even those with no religion are drawn to the still-functioning house of prayer, where saints and sinners have been worshipping since 1030. Though contemporized for convenience, aging stained-glass windows line the ancient stone hallways, giving a glorious glimpse into yesteryear. A few blocks over, the smaller St. Patrick’s Cathedral is open for business as well.

A stroll along the River Liffey also reveals a city at a crossroads; at one end, where the picturesque Ha’penny Bridge crosses a greenish divide, ages-old architecture houses financial firms and IT centers. Down by the docklands, where the Liffey empties into the Irish Sea, bold and brash buildings – most designed and developed during the boom years of the ‘Celtic Tiger’ – now pepper the waterfront with chrome and steel.

That culture clash is also well-chronicled in the city’s many museums, galleries, bookstores, concert halls, theatres and cinemas. The Irish always had a beating and bleeding heart for the arts, and much of the Emerald Isle’s creative lineage and legacy begins and ends in Dublin. Today, more than ever perhaps, the city’s forward vision is tempered by a look over its shoulder.

That strong sense of self – where warmth, wit and wisdom are one – have been hallmarks of Dubliners since the city was first settled by Vikings in 839 AD. That spirit has stayed – like a single thread woven through the tapestry of centuries.