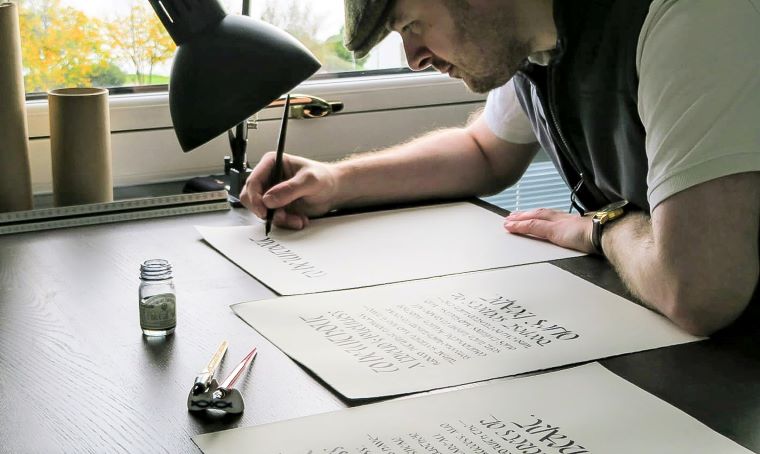 Ste (as in Ste-phen) Duckett looks out from his window in Dysart on the southern edge of the Kingdom of Fife. He has just finished another two minutes on a piece of illuminated calligraphy that he has been working on. Two minutes is the most he allows himself to spend at any one time without a pause. It is intense work, and the potential to make a mistake and ruin hours of labour is high. From his window he looks over the Firth of Forth towards Edinburgh to the south and Berwick-upon-Tweed to the east.

Beyond the Isle of May and Bass Rock guarding the entrance to the Firth he can see out over the North Sea. It is a landscape of ever-changing weather and colours. Here the golden dawn glints on the surface of the water, and during that day the landscape can be coloured with blues, greys, and greens, with evening bringing deep, darkening blues as the moon and stars emerge. For this specialist in Celtic calligraphy the views provide a moment of respite for the eyes, but are also a source of inspiration for his art. The tranquility allows thoughts, words, and passages to flow while the colours inform his palette. After a few minutes he turns back from his window and resumes work on a page from a very personal project – Windows Into The Night. It is a book of thought-provoking quotations, each inspired by nighttime and taken from a different source.

Each page is beautifully scribed with coloured lettering and an illuminated window motif derived from the starting letter of the quotation. Today’s illuminated window heads a quotation by Canadian writer Charles de Lint. It reads, ‘You can’t stand up to the night until you understand what’s hiding in its shadows.’ The journey that has brought Duckett to where he is today is as exciting as it is varied, yet those words are of greater significance to him than many people understand. 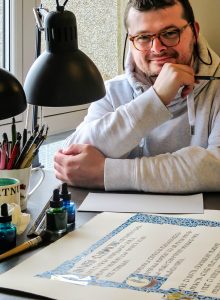 Duckett and his two brothers grew up in Birmingham, England. His parents were professional musicians and played in a local symphony orchestra. His mother was a cellist and his father played French horn. Collectively, the family had an interest in history, stately homes, literature, and music that all merged comfortably with the family’s involvement with St. Chad’s Cathedral, Birmingham. Designed by Augustus Welby Pugin in the Gothic style, it was the first cathedral to be built in Britain since the Reformation. By the time Duckett was seven years of age the cathedral had become his second home.

“For a young boy it was a fascinating, almost mystical place: the huge spaces, towering arches, stained glass windows, the smell of burning incense, flowing robes, rich vibrant colours, the sound of thunderous organ music echoing off the stonework and big, leather-bound books with ornate lettering.”

He started his musical journey as a choirboy in the cathedral choir and by the age of nine he felt a strong calling to the priesthood. As his commitment to his faith grew so did his interest in lettering and music. By the age of twelve he was practicing rudimentary calligraphy and by fifteen he was learning to play the organ. It was at school when he was studying for his A-level exams that things began to unravel. He encountered the first manifestation of a personality disorder and a serious, debilitating depression that was to become a recurring feature of his adult life – although it would be another two decades until it was diagnosed. With his studies unfinished he withdrew from school.

At eighteen years of age Duckett found himself unsure what to do with his life. Having been influenced by visits to stately homes, literature founded in the English class system, and the pomp and ceremony of cathedral life, he wrote a letter to Buckingham Palace asking about the requirements needed to become a butler. To his surprise they offered him a position as an under butler, which he accepted. It was there that he learned the skills of butlering. Perhaps surprisingly for someone suffering from depression there followed

an eighteen-month period as an undertaker which he regarded as, “Not being dissimilar to butlering – it is basically dressing up and looking after people.” He returned to butlering, and for the next nine years held positions at Hagley Hall in Worcestershire, Brocket Hall in Hertfordshire, Hatfield House in Hertfordshire for Lord and Lady Salisbury, and Arundel Castle in West Sussex for the Duke and Duchess of Norfolk. While living at Arundel he held the position of second assistant organist at Arundel Cathedral and sang in the choir. At the age of twenty-three an opportunity arose to travel to Chicago where he lived for five months. It was during his stay in America that he met several fellow organists, played in a number of churches, and made many friends who have remained an important part of his life. Upon returning to the U.K. Duckett took up the position of under-butler to the 11th Duke of Marlborough at Blenheim Palace, Woodstock, Oxfordshire, as well as the role of organ curator at the palace’s chapel. It was during his five years there that he again felt the draw of the priesthood and in a moment that he describes as a ‘reconversion’ he enlisted as a novice monk at Mount Saint Bernard, a Trappist monastery in Leicestershire. 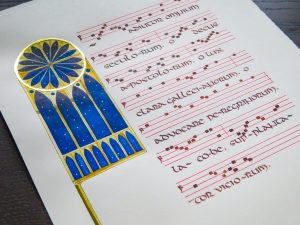 At first, life in the monastery was perfect. He eschewed the trappings of modern living, giving up everything except for his journals that held his writing, poems, and thoughts over many years.

Rising at 3:15am. each day he would climb the stone steps to the top of the tower and watch the dawn unfold over 200 acres of monastic landscape. Music remained a big part of his life and here he sang and played the organ. During long periods spent alone in his cell he practiced his calligraphy, drawing influences from writings to be found in the monastery and from the famous Book of Kells and Book of Durrow. Upon the death of a parishioner in Woodstock, the local priest remembered Duckett’s passion for lettering and sent him a collection of professional calligraphy equipment that had belonged to the deceased. He spent many hours honing his skills. After two years of monastic life the depression started to resurface and he realized that, although the simple life suited him, the most important things to him were his family, nature and the great outdoors, music, and calligraphy. He left the monastery and returned to Blenheim Palace as head butler.

In 2019 he made the decision to move to Dysart in Fife to be near to his brother and his family. Now he lives a simple life with his Ragdoll cat, Chestnut, and concentrates on producing beautiful, thought-provoking pieces of calligraphy. Working only with high quality papers and inks, he specializes in Celtic calligraphy, often fusing elements of ancient and modern Celtic designs; the smooth, elegant curves and rounded hand suiting his style. His framed works adorn the walls of private residences, chapels, and medieval halls in the U.K., North America, and Montenegro. He undertakes private commissions but also produces unique greetings cards, medieval block-notation music manuscripts, prayers, biblical passages, and illustrated books, and sells his work through his website and Etsy shop. He is the only calligrapher in Scotland who has been accepted as a corporate member of the Guild of Master Craftsmen.

Completing the Charles de Lint quotation for his Windows Into The Night book, Duckett lifts his head to gaze out of his window again. The light is starting to fade. The cat sits on the windowsill and together they gaze out over the Firth of Forth. They both know how to see through the darkest of nights.

All photos by Ste Duckett