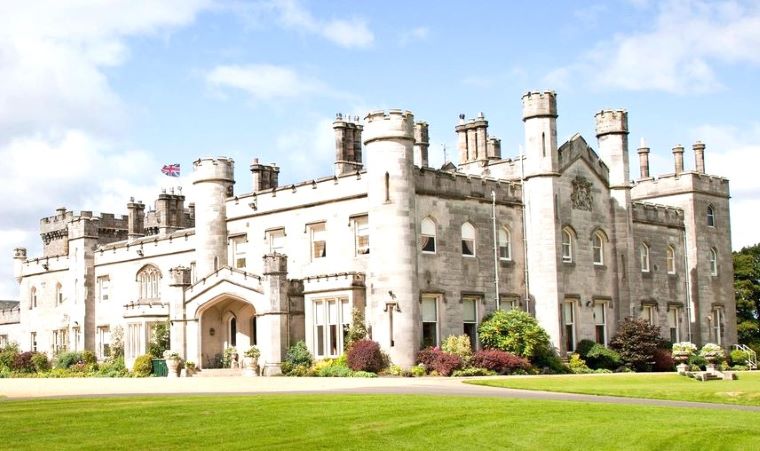 Standing by the entrance of the ‘Auld Keep’ of Dundas Castle situated on the south side of the Firth of Forth, I ran my hands over the thick, stone walls and embraced 600 years of history. I was near to the site of an old dungeon and an underground escape passage believed to have once linked the tower with a Carmelite Priory in nearby South Queensferry. Stepping inside, I found myself in the impressive, medieval Stag Chamber with its long wooden dining tables, over which hung a magnificent antlered stag’s head.

Moving on, I climbed the old stone staircase to enter the Great Hall with its high, stone-vaulted ceiling. This atmospheric foyer is used for weddings and can accommodate one hundred guests, with relay by video link to another fifty-two. I continued my ascent, exploring other spaces en-route, until finally I emerged on the roof of the Keep with its old castellated ramparts. The views were stunning, and the strategic importance of the tower and its location was immediately apparent.

The name Dundas is derived from the Gaelic ‘dun deas’ – or south fort – and the Keep is the oldest part of the present castle, dating back to 1416 when the effective ruler of Scotland at that time, The Duke of Albany, granted James Dundas a licence to build.

These were dark and dangerous times, and for the previous two hundred years the Dundas family had been amassing large tracts of land stretching west from Edinburgh. They were a powerful family, and powerful families needed protection. In times of trouble the Keep was a place of refuge for the family and its loyal supporters, but it was also a vantage point and a defensive stronghold. It was one of several Keeps that ran along both the north and south sides of the River Forth, and by way of beacons that were lit when under threat, Keeps formed part of the area’s early warning system.

From my rooftop vantage the only towers I could see today were the columns and spires of the iconic bridges over the River Forth a few miles to the north. To the east lay Scotland’s capital, Edinburgh, and to the west were the remains of Linlithgow Palace, birthplace of Mary Queen of Scots. I looked down onto the rooftops of the more modern Dundas Castle. Dating from 1818, it was designed for James Dundas by one of Scotland’s great architects, William Burn, a pioneer of the Scottish Baronial style. Contemplating the mastery of the design I noted how the more modern castle paid homage to the Auld Keep, allowing it to dominate the skyline, while emulating its corner turrets and castellated walls. Extending linearly into the landscape it retains an intimacy of scale through the use of tall, elegant windows and a myriad of slender chimneys and towers. 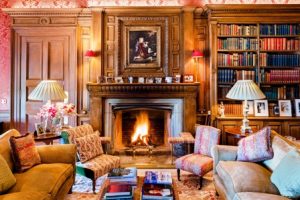 Back down on the lush lawns of the 400-acre Dundas Castle Estate, I felt protected from the hustle and bustle of modern life. Surrounded by woodland it was hard to imagine that Dundas Castle is only fifteen minutes from Edinburgh Airport and thirty minutes from Edinburgh city centre. It is also but a short distance from excellent road links connected to many of Scotland’s wonderful sites, including the Kingdom of Fife with its Royal Burgh of Culross, the picturesque fishing villages of the East Neuk of Fife and St. Andrews – the home of golf.

First and foremost, Dundas Castle is a family home. After completion of the works by Burn, the project had diminished the Dundas family coffers to the extent that they had to sell the estate. It was purchased by William Russell, before being sold again in 1899 to Stewart Clark – the great-grandfather of the current owner Sir Jack Stewart-Clark. Clark was one of five brothers who had taken over the family sewing thread business in Paisley, turning it into one of the UK’s most profitable Victorian textile industries. Following the death of his mother in 1995, the Dundas Castle Estate passed to Sir Jack Stewart-Clark whose background embraces twenty-seven years in industry, including the family thread-making business, and also as Managing Director of various companies including the renowned Philips Electrical Limited. He was also a Member of the European Parliament from 1979 until 1999.

Dundas Castle’s Sales Manager, Kara ter Morche, greeted me at the main entrance and led me into the spacious hallway with its dark panelled wood, stained glass windows and fluted plasterwork. The slight ecclesiastical feel was unsurprising given that Burn had undertaken several church projects during his career. Ter Morche showed me into the library. The wood-panelled walls were exquisite and I could have spent hours browsing the leather-bound books. Casting an eye around my surroundings I sank into a comfortable couch in front of the roaring log fire. I observed numerous framed photographs, paintings, delicate soft furnishings and the huge windows with their drapes. Reading my thoughts, ter Morsche remarked, “It may be a castle but it is first a family home.” I felt that was an important distinction.

Sir Jack Stewart-Clark joined us and we chatted about the history of the place. He acknowledged that by the time he inherited Dundas Castle it had suffered years of neglect and was in a poor state of repair, “The Auld Keep lay uninhabited for three hundred years and the main castle had numerous leaks accompanied by an outbreak of dry-rot.” He admits he thought long and hard about the future of Dundas Castle.,

And so the restoration of Dundas Castle went ahead, backed by a business plan that would see it retained as the Stewart-Clark family home, but also one of the country’s premier 5-Star Exclusive Use venues.

Today, the flexibility of the spaces offered throughout Dundas Castle, the Auld Keep and a separate pavilion in the grounds, renders it an outstanding venue for weddings, special family gatherings, corporate team-building events and product launches. Its baronial style architecture and stunning interiors have been used for film productions and photo-shoots. 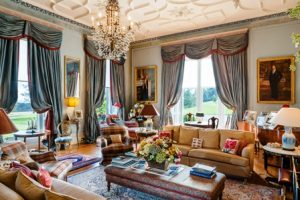 Exiting the library, ter Morche led the way to the drawing room with its gathered blue drapes and ornately plastered ceiling, followed by the Croquet Room with its stunning, eclectic collection of paintings. This large space often serves as a dining room but can be used for conferences or as a large meeting room. Heading to some of the seventeen exclusive-use guest bedrooms, ter Morche pointed out that Sir Jack Stewart-Clark’s wife, Lady Stewart-Clark – an accomplished interior designer – was responsible for the redecoration of all the interiors of the castle following the restoration works, “From the muted, pastel blues and greens of the Spring Bedroom to the warm reds, pinks and lilacs of the Peoni Bedroom, each of the rooms has its own unique sense of season and nature.” She was right, and with the late afternoon light flooding through the large windows the effect complimented the architecture of the interior spaces bringing the rooms to life. The period-styled en-suite bathrooms were equally sumptuous, and I could imagine myself after a hard round of golf sinking into the bubbles of a warm bath with a glass of malt in hand.

Ter Morche was keen to point out that as an exclusive-use venue, all types of special events can be arranged upon request, “We have even hosted a murder mystery event, and a Downton Abbey experience for our guests.” The estate also has a 4 x 4 driving track, as well as squash and tennis courts. Golf and sailing can be arranged in the surrounding area also. To cater for guests who seek top-quality luxury in a stunning location, without taking exclusive-use of the castle, the estate offers a limited number of ‘glamping cottages’ in the grounds, and a boathouse by the edge of Dundas Loch where I was to spend the night.

I thanked ter Morsche for her tour of the castle, and also for the insight into how this property had evolved over the centuries from an ancient keep into a stunning family home and a 5-Star Exclusive Use castle. I enjoyed the walk back from the castle to Dundas Loch. Passing a field of llamas, and spotting a deer bounding through the trees, I reached the warmth of the boathouse with its quaint, romantic atmosphere and wooden balcony cantilevered over the water. It is the perfect place for newlyweds to spend their first night, or in my case, just to sit outside with a glass of whisky and watch the ducks swim lazily by as the sun set over this truly historic and wonderful location. ~ Story by Tom Langlands