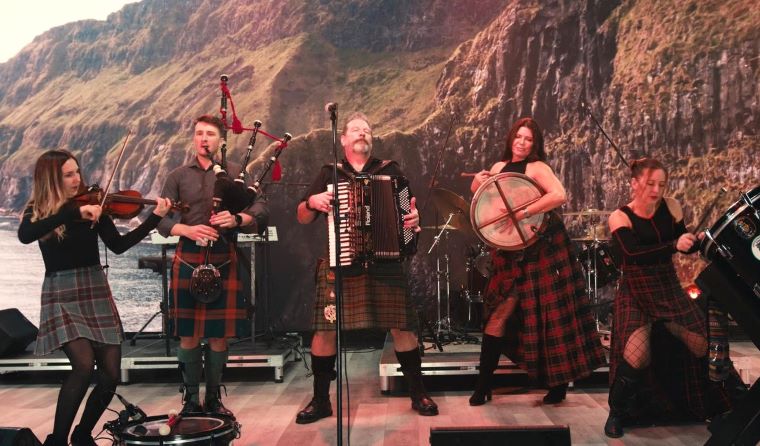 The American Rogues return to the road in support of their new recording. Recently we spoke with the band’s vocalist Nelson Stewart.

What is your own heritage?
I often say I am part Scottish, part Welsh, part Irish, part English, and all Canadian.

When and why did you get involved with music?
Since I was young, I’ve been drawn to many different types of music – I would sit in front of our giant, velvet-fronted, 1970s radio/turntable/8-track player listening to Elvis, Abba, Johnny Horton, etc. and I regularly watched Soul Train, Lawrence Welk, and Hee Haw on TV. My parents took notice and signed me up for accordion lessons (knowing I was also into hockey they likely didn’t want to invest in a piano on the chance that performing wouldn’t last). I was fortunate enough to have Canadian Accordion Champion, Helen Milne, as my teacher. She was a wonderful lady who was very patient with me, particularly since I wasn’t fond of practising. My first band was an accordion group comprised of her students that she would take to perform at retirement homes. When I started high school, I was again very fortunate to have some wonderful music teachers named Ryan Scott and Sylvia MacMillan who further nurtured my love of music and performance. I still keep in touch with Ryan and Mac and I tell my own music students that the thread of their inspiration continues on through them (and hopefully their own students).

Are they the same reasons that you continue to be involved?
I would say so – I still love music. Most people don’t play music to get rich – it’s something you love and, if you’re lucky and surround yourself with good people, you might eventually start getting paid. For me the pay is secondary to the joy music brings. Getting to travel around the world and meet wonderful people from different cultures is deeply fulfilling.

What are the challenges of the vocation?
Everyone in our current lineup gets along really well and we all love playing music so when we come together it’s always a great time and the music flows easily. I would say the biggest challenge is logistics. We have a lot of amazing musicians on our roster, but everyone has jobs, families, competitions, etc., and trying to line up a group for events is always a challenge. That, and the paperwork involved in visas, contracts, etc. are my least favourite parts of the job. I always say that when we make it to the big time the first thing I’ll do is hire a secretary. 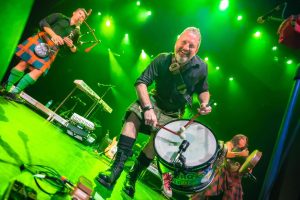 What are the rewards?
Music has given me so much, including great friends, seeing countries I may never have been able to visit, and even my incredible wife of 14 years (she was in the audience at one of our shows). I get to share the stage with fantastic people, such as my grandson and the brilliant drummers from taiko group, Nagata Shachu, who are part of our Celtic/Japanese side-project, The Dragon & the Rising Sun. I’ve watched my music students grow and thrive to the point where they have been nominated for Junos and are touring the world themselves. One even performs with us and is our sound/video engineer. I have had the honour of spending time with Navy SEALs and other Veterans, and I’ve experienced the sadness of performing at their memorial services. Music has truly enriched and guided my life.

How has the band evolved over time?
When I joined this group’s predecessor 20 years ago there were 4 us playing pipes and drums. As the years progressed, after adding more instruments and musicians from across North America, I expanded our sound and we went from generally playing smaller acoustic sets to performing at large festivals and theatres, sometimes with orchestras and 8 or 9 members of our own. Along the way we began working with the Navy SEALS and started performing at their musters, reunions, memorial services, monument unveilings, and fundraisers, including shows at the SEAL base in Little Creek, Virginia and at Pebble Beach Golf Club in California. Around that time, we also began playing USO-type tours of bases from Japan to Italy to the United Arab Emirates. These shows are extremely important to us as we have close friends and family members who have served in the military. A few years ago, my wife Jeania and I studied taiko drumming at Kiyoshi Nagata’s studio in Toronto and I had the idea of joining forces with Kiyoshi’s world-renowned taiko group, Nagata Shachu. We sold out our first show together at the Harbourfront Centre Theatre in Toronto and since then have become The Dragon & the Rising Sun and played other events, including the World Music Festival in Sherbrooke, Quebec, where we were the closing act in 2019. That group has tapped into my longtime love of Japanese culture and, after my wife, my dog, and my grandkids, has become one of my favourite things.

How did the COVID-19 pandemic affect the group?
As you know the first lockdown hit in March, the busiest month of the year for a Celtic band, and we watched as our shows in New York, Chicago, Niagara Falls, Detroit, etc. fell like dominos. At that point everyone was hoping it would just be a temporary thing and that we might all be back to performing by the summer. As time went on, we watched gigs in Scotland and Japan get canceled, as well as ones closer to home that hurt just as much, such as the Caledonia Celtic Festival near us in Ontario. Fortunately, a number of groups with whom we’ve worked for many years, including the Crieff and Cowal Highland Gatherings in Scotland, the Sherbrooke World Music Festival, the Moncton Highland Games, and the Ottawa Scottish Society, commissioned us to create videos for online performances. The Guelph Multicultural Festival also invited us to perform live online for them (this year we’re excited to be headlining that one in person). As it was for people everywhere all of this meant a creative, financial, and emotional blow – those are years none of us will ever get back. My other passion is being a schoolteacher, and not getting to see my students in person for months was very depressing, as well. Perhaps the worst of all was that my grandkids live in the States, and I live in Canada so for a year and half I couldn’t see them (my granddaughter was going on two before I finally met her in person). One of the few upsides to being locked down was that my dog and I got to spend every day together – we were both quite happy about that. 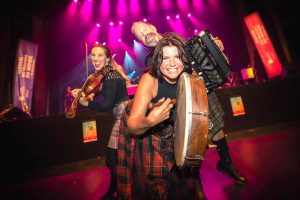 How much did you miss performing at Highland Games/Celtic Festivals?
All of us have been performing for many years so there was definitely an emptiness when the bottom fell out – Celtic events are at the heart of what we do. Because our members live all over North America gigs are generally when we get to spend time together with each other’s families, so that was upsetting, too, as this band is like a family. I’ve also become close with a number of event organizers, such as Lyne Giguere in Sherbrooke, Steve Tweedie in Moncton, and AO Lucy in New Hampshire, so I missed them also, as well as our friends from other groups, such as the Screaming Orphans (with whom we’ll be playing in Quebec this year).

What lessons did you learn from the lockdown (as they pertain to the band)?
The lockdown definitely reinforced what I already believed – that life is short and people matter.  As I mentioned people are the best part of this job and, over the years, we’ve had the privilege of getting to meet some very fine ones from around the world.  When that was taken from us it hurt.

What’s on the group’s agenda for the rest of 2022?
November will see me check off the #1 item on my bucket list because we’ve been invited to perform in New Zealand. Finally, if we decide to come back from New Zealand, we will be headlining New York City’s 25th annual Tartan Day in early 2023 and then we’ll be returning to Japan.