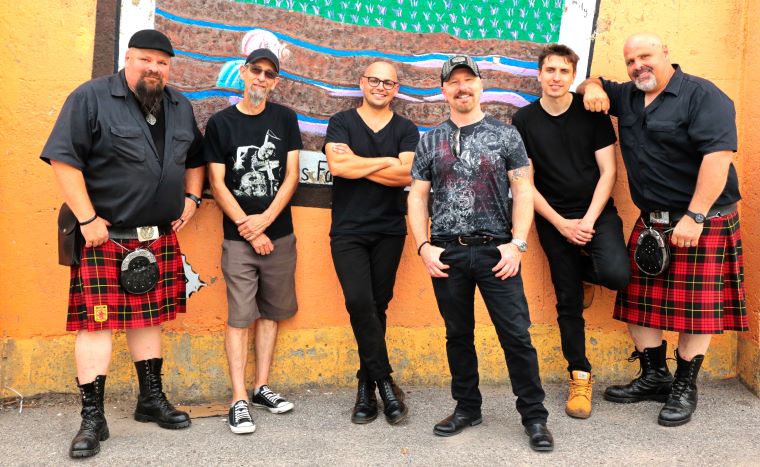 The Mudmen are one of the busiest Celtic rock bands in North America. Recently we spoke with the piper Sandy Campbell about the group’s past, present, and future.

What is your own heritage?
The Campbell Brothers are the founding members of Mudmen and are mainly Scottish with a mix of English and Irish. Our Mom was Dewar and the Dewars came from Kilmartin Scotland and settled in Kilmartin Ontario. Our Grandmother on Mom’s side was a Darville bringing in some English and her mother was a Cumming bringing in more Scottish. Our Great, Great Grandmother was Rebecca O’Brien from Tipperary County, and she was very Irish. Our Mom still lives on the family farm and was born right in the house she still lives in. If our sister Heather, Robby or I were still at home on the farm we would be 5th generation.

When and why did you get involved with music?
Music was always a big part of our lives. We went to Highland Games, old time dancing with fiddle bands, watched the Irish Rovers and Don Messer on T.V and listened to bands like Jimmy Shand, Kenneth McKellar, Harry Lauder, etc. on the record player. Mom also played piano, and we had several fiddle players over at the house with Mom Chording on piano. Sandy was supposed to learn to play the fiddle but was offered the bagpipes. He later taught his brother Robby and they both played in the Strathroy Legion Pipe Band for years and then joined the 78th Fraser Highlanders Pipe Band in Toronto. Mom was our biggest influence musically.

Are they the same reasons that you continue to be involved?
No, when we first started it was just enjoyable and a hobby but as time went on, we kept evolving. Performing with the Irish Rovers around 1992 was such a great experience we instantly knew that’s what we wanted to do. We continued to play with the Rovers, then John McDermott and even a few shows with the Chieftains. Around 1994 we put together our own band with bagpipes, fiddle, mandolin, guitar, vocals, bass, and drums and performed several shows as the Campbell Brothers. We failed however and lost a lot of money in the process and had to put that idea on hold for a while. Then in 1998 John McDermott got us in to the Mirvish production of Needfire with himself, Denny Doherty of the Mommas and Poppas, John Allan Cameron, Mary Jane Lamond, the Irish Descendants, the Ennis Siters, Jim Fidler, etc. This was one of the greatest moments in our lives walking out performing our Rock number and getting a 3000-person standing ovation the first night and every night. After many years of being told bagpipes did not belong in popular music and we were out of our minds we finally got to prove our point and it was a great sense of accomplishment. This led to us being signed to EMI Records and opened many doors for us. 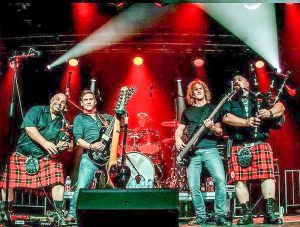 What are the challenges of the vocation?
There are a lot of challenges in this vocation. For us the biggest challenge was the bagpipes. We were told repeatedly that the bagpipes did not belong in popular music. Even our Record Label said the bagpipes were not seen as a credible instrument and they didn’t want us to be a gimmick. There are many challenges in this business but we’d like to try to keep this interview somewhat positive.

What are the rewards?
The rewards are getting to meet great people and travelling to many places around the world. We’ve performed for and met the Queen, Celine Dion, Sarah Mclachlan, Eugene Levy, Martin Short, William Shatner, Wayne Gretzky and many more. We became friends with Don Cherry, Ron MacLean, Glenn Healy, John McDermott, and the late great John Allan Cameron. We have lived an amazing life and we’ve been around a tonne of great characters. We’ve had some rough years, but we’ve had many more years of the greatest times in our lives. We’ve had great bosses who’ve allowed us to take time off work and we’ve made many friends and fans over the years. People have been the greatest part of this business.

How has the band evolved over time?
The band has evolved a lot over the years. We started playing traditional music with guitars, vocals, drums, mandolin, fiddle etc. Then we did a rock demo and went heavier around 1996. In late 1997 we started our first full length album which became our first Mudmen album and in 2000 we signed a record deal with EMI Records. We were a basically a Rock band with bagpipes and a lot of attitude. With EMI Records we reached #19 on the Edge Radio, had 6 Music videos on Much Music and performed at a lot of large festivals. Now we are returning to our roots and playing Celtic festivals, theatres and family festivals. We have banjo and mandolin in the band, and we’ve tried to become a band that appeals to a large demographic. We feel we have really improved as song writers also with Robby and Sandy writing most of the songs.

How did the COVID-19 pandemic affect the group?
Covid shut us down for nearly 2 years and everyone stepped down from the band during that time. It was obviously a tough time for many people but for us we had been through far worse, so we came back out smiling with 4 new awesome band mates. Their names are Colin Amey on vocals and guitar, Jordon Brosseau on Bass and backup vocals, Andy Gingerich on drums and Alex Showdra on guitar, mandolin, banjo and backing vocals. 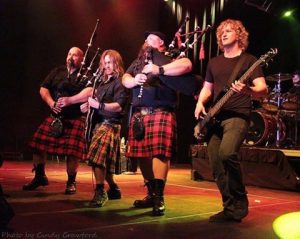 What’s on the group’s agenda for the rest of 2022?
We have a new CD out called “Farmers Tan” and we are performing at a lot of theatres and festivals. Next year will be our 25th anniversary and we’d like to put our book and documentary DVD out. This project however has proven to be much harder than we anticippated but we are still working on it. The Trews, Danko Jones, Natalie MacMaster, Ron MacLean, Tara Slone, Don Cherry, Walter Ostanek, Alan Frew of Glass Tiger, Bob from Great Big Sea, Glenn Healy, etc. have all given us some nice testimonials on video and we think we have a great story to tell.