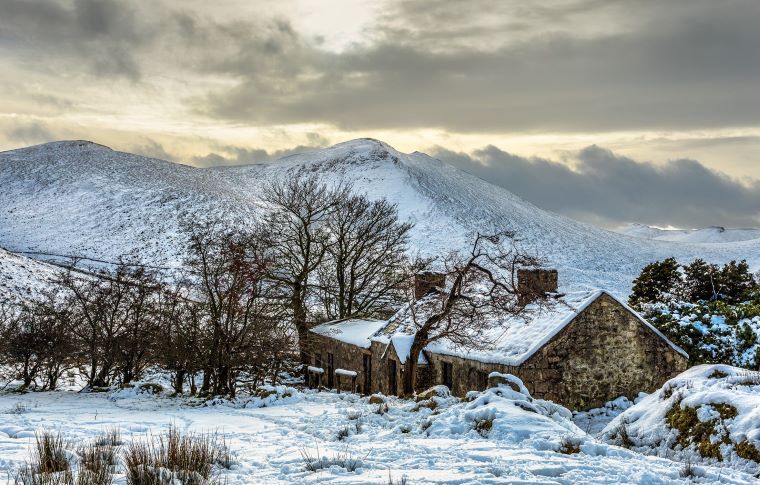 NO SUNBURN
Put away that after-sun – the winter weather in Ireland is crisp, cool and cosy. Is there any more satisfying winter pastime than crunching copper leaves? Get stomping at dreamy spots like Mount Usher Gardens in Wicklow, Huntington Castles Yew Tree Walk in Carlow or under the intertwined Dark Hedges in Ballymoney, County Antrim. Beaches aren’t just for summer. Ireland’s sandy strands reach a dramatic pitch in winter when a brisk wind rolls in over headlands, whipping up foamy waves. Some seaside stunners for strolls include Antrim’s Whitepark Bay, Curracloe in Wexford and Portmarnock beach in County Dublin. Fun in the sun without the burning.

COZY PUBS
Pubs in Ireland aren’t just about drinking (mind you, we do recommend the craft beers). For example: Yeats is said to have taken his only pub drink in Dublin’s Toner’s. Of course, we can’t blame him. It may just have the most perfect pub snug on the entire island. What’s a snug? It’s a secret little pub seat that’s usually nicely settled into a quiet corner and sometimes closed off by its very own door. In Titanic’s hometown, Belfast’s Crown Bar Liquor Saloon is Ireland’s only gas-lit bar and some of the booths have their own service buttons. Just buzz for beer!

SAVE MONEY
Free, affordable and special offers are four words every traveler likes to hear. In Ireland, you’ll be hearing them a lot during the winter season. Can’t afford a trip to Ireland? Think again. For a start, many museums are free. Pop along to the following Dublin museums and admission won’t cost you a penny (deep breath): all of Ireland’s National Museums (that includes National Gallery, Natural History, Archaeology and Decorative Arts and History museums), Kerry County Museum in Tralee, Ulster Museum in Belfast and the open air history lesson that is Derry-Londonderry’s 400 year old city walls.

SHOP IN STYLE
OK, if you like to shop there’s a chance you’ll spend some money in Ireland. Dublin’s fashion scene is varied! Grafton Street is a cobbled catwalk counting Sisley, Topshop and the old-time elegance of Brown Thomas among its shopping dens. Around the corner, the Powerscourt Shopping Centre boasts antiques and boutiques; Dublin Flea Market happens on the last Sunday of every month; and Project 51 is a designer collective where you’ll find ONLY original fashions. Out west, Galway city is a crafty corner gently packed with artisan boutiques and workshops tinkering away on everything from Claddagh rings to bone carvings. For a shopping trip with a whisper of adventure, head for the elemental Aran Islands and pick up one of the eponymous sweaters. 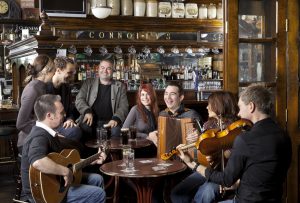 GREAT MUSIC
Like music? Ireland has you covered. In Dublin, the big hitters will be found at the O2, while there’s any number of intimate gigs happening weekly at spots like Whelan’s, Vicar Street, The Village and the Button Factory. To catch a traditional music session, check out the Dublin Sessions website for full listings. Belfast has long been known as a music maker with Van Morrison calling the city home and acts like Snow Patrol making their big stage debuts here. For a keyhole view into the city’s music soul, hop on the Belfast Music Tour. The John Hewitt and The Duke of York are just two top live venue picks with The Belfast Empire Music Hall and the tempting triumvirate of The Limelight, Katy Daly’s and Spring and Airbrake home to some of the city’s biggest and brightest party nights. Traditional music has made counties Kerry, Clare, Limerick and Cork its home, but look hard enough and you’ll find a session anywhere on the island.

FANTASY ON FOOT
Want to really understand Ireland? Walk this way! The easiest way to get under a country’s skin is to walk it. In Belfast, the Titanic Walking Tour is lead by an ancestor of an engineer who worked on sailed and sadly perished with the ship of dreams while Belfast Guided Walking Tours whisk you through the city’s Victorian charms such as the Botanic Gardens, Victoria Street’s linen ladies and a leaning clock tower. If nature calls, hike into heaven in the likes of Down’s Mourne Mountains, Waterford’s cinematic Nire Valley or Cork’s coastal dreamscape, the Beara Way. The Kerry and Wicklow Ways, too, are meticulously mapped tours of east and west and the Great Western Greenway doubles as both a cycling and a walking route taking in Atlantic coast views that have been making visitors speechless for centuries.

STAR IN GAME OF THRONES
If you thought Westeros was just a land of fantasy, think again. Fancy taking a walk in the real life Westeros? The Game of Thrones TV series required a setting as epic as the storyline. Naturally, they came to Northern Ireland. Castle Ward in County Down was transformed into the ice-encrusted stronghold of Winterfell. Nearby, the murky interior of Tollymore Forest Park was used to depict the Haunted Forest. Next, sweep out to the coast where the crumbling beauty of Ballintoy harbor was the setting for the Iron Islands. And it just keeps going. Is that the Mourne Mountains or the swaying grasslands of Vaes Dothrak? Are those County Antrim’s famous Dark Hedges or the bandit-infested King’s Road?

EXCELLENT FOOD
You’ll put a stone on. But it’ll be worth it. The grub (food) is good in Ireland. Dublin, for example, is buzzing with a new foodie heart where eateries like The Exchequer, Fade Street Social, Bear and L’Gueuleton are spicing up the city’s dining scene. In Belfast, The Barking Dog is a new trendy addition while Ox is serving up delectable three-course lunches for a mere £16 (€20). Being an island, there’s no surprise that seafood suppers are in plentiful supply. Fishy Fishy in Kinsale is a stand-out for fish dinners while both Galway and Louth are famed for serving up some of the world’s finest oysters. The Skelligs Chocolate Factory on the Kerry coast would make Willy Wonka jealous and the Chocolate Garden, ensconced in Carlow woodland, is a cocoa bean dream. To view Ireland with a foodie friend, both Fabulous Food Trails (Dublin & Cork) and the Kilkenny Food Trail have you covered.

IRISH PEOPLE
Everywhere you go on the island of Ireland you’ll find friendly locals offering Ireland’s famous warm welcome. Céad míle fáilte, come on in and take a seat by the fire after an unforgettable day exploring the Emerald Isle.