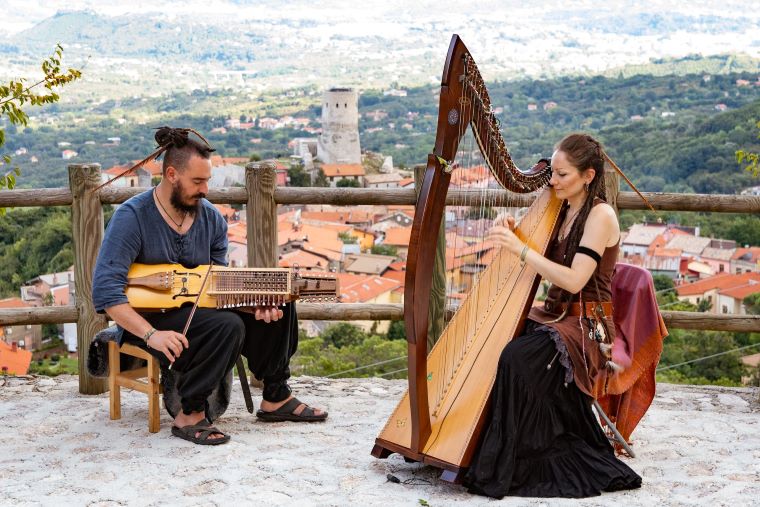 Those curious about the power of fate need to look no further than Emian, the talented pagan folk duo based in Southern Italy. While the group’s two members, Emilio A. Cozza and Anna Cefalo, were born and raised in entirely different regions of the country – Salento and Campania, respectively – they were fortunate to meet each other in 2011 at a community house for artists in Cumae.

“It was love at ﬁrst sight,” recalls Cefalo via email. “Before launching Emian, we played in two diﬀerent Celtic projects, but we soon started to play together for fun. Before we knew it, requests for gigs began to pour in. We needed a name, and the ﬁrst thing that came to mind was to join our first names…and so Emian was born!”

She notes that the couple come from distinct musical backgrounds.

“Emilio’s great-great grandmother played tamburello salentino (tambourine) in public for serenades, so he grew up listening to stories about her. Over the years, he learned to play the tamburello salentino, the guitar, percussion, violin, ﬂute and many other instruments, including bagpipes, both Scottish and medieval.

“I started to play music because, as I always like to say, I have it in my blood,” she continues. “My entire family played music, and most of them were in bands. I started studying classical harp in Conservatorio when I was 11. In 2002 I bought my ﬁrst Celtic harp. I also studied classical and modern dance from the ages of 3 to 12. My ﬁrst performance as a singer was at 13 and, in 2004, I started to learn how to sing with the harp. Now I play the Indian harmonium and some percussion also.” 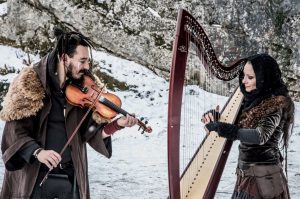 After performing various gigs and recording a handful of singles, Emian released their debut full-length album AcquaTerra in 2013, which Cefla describes as a “dedication to the folk of the Celtic areas.” The pair then went on to record three additional albums, including Winter Solstice (2014), Khymeia (2016) and their most recent effort Egeria (2019). While still led entirely by Cefalo and Cuzzo, the later albums were supported by fellow musicians Danilo Lupi and Martino D’Amico.

Cefalo notes the band’s style and sound is a true musical melange.

“Not only is our music Celtic, but it is Balkan, Northern European, Mediterranean – totally original. We have taken musical inﬂuences from the whole world. We love combining past and present to get new results. At the same time, we have never forgotten the purity and beauty of acoustic folk music. Our hope is to always keep both aspects – pure acoustic folk music and the folktronic pagan folk. We are inspired both by the outer world and the inner world: a memory, a sound that we liked, the voice of a new musical instrument, and even the natural world.”

She admits that a career in music can be challenging, especially in a place like Italy where the trade is rarely taken seriously.

“For us music a real thing – it is not just a hobby – it is a full-time profession and something we live for.”

“Because of that, there are sacriﬁces, study, money invested in instruments, hours of work, strenuous journeys, frustration, and so on. This is especially true for independent artists like us, as we end up doing the work of an entire team.

“Fortunately, the rewards are worth all of the work: the people who support our music and who sing our songs, the folks we have met on our journey, the musicians we have learned from, the opportunity to travel and experience other cultures, and the simple joy of composing new material.”

While things have slowed down in the past few months, Cefalo says that the ongoing COVID-19 pandemic is not enough to stop Emian from doing what they love.

“We are following protocols and we have had to cancel or postpone a few things, but we will keep on creating music and hope that the situation will be resolved soon as we still have many ideas and projects to realize.”