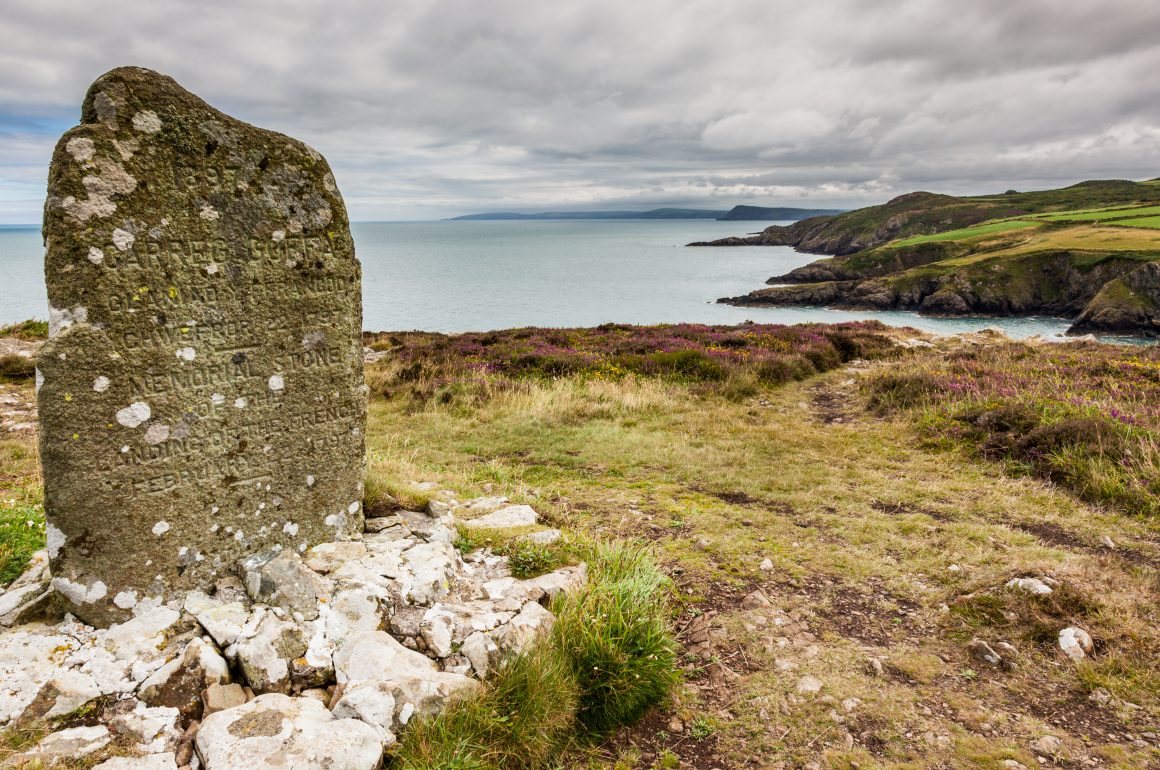 Gazing out across the calm Irish Sea from this stunning Celtic coastline in Wales, it’s difficult to imagine a French invasion force landing here, with plans to incite a British revolution.

Thirty metres below me the waves lap gently against the rocky shoreline. A light, salty breeze caresses my face, and the sky screeches to the piercing calls of herring gulls. Both left and right, the Pembrokeshire coastline stretches far into the distance, a sentinel to potential invaders. Behind me, fields and hedges top the luscious landscape, with only a handful of cottages and dwellings punctuating Britain’s only coastal national park.

I lean against the small stone monument erected to commemorate what happened here, 220 years ago on 22nd February 1797, and imagine what it must have been like for those French soldiers clambering up the rocky cliffs to this viewpoint. Little of this landscape has changed since Carregwastad Point, a few miles from Fishguard, became the spot where the last invasion of Britain took place. 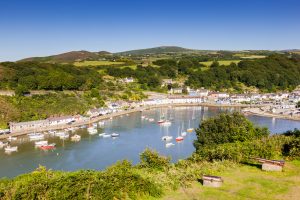 It was the idea of Irish-American Colonel William Tate, whose hatred of the British found him support from an 18th century French government, which was still in the midst of its own revolution. Tate, along with his French counterpart Jean Joseph Castagnier, departed France by sea on the 16th of February in 1797, with 1400 men, and planned to sail up the Severn Estuary to land at Bristol. There, they would take the city and encourage locals to rebel against the British Establishment, creating a British revolution.

But it was an ill-wind, or rather an easterly one, that blew them – and thus history – off course. Plan B was to incite a Celtic uprising in West Wales, hoping it would spread across Britain. So Tate’s French ships sailed around the West Wales coast, and dropped anchor in the Irish Sea.

I peer over the cliff top, to the white water gently eroding the coastline below. It’s not a safe place to land an invasion force. Yet seventeen boatloads of French soldiers were forced to clamber onto the rocks here, as they were shuttled from their ships in small rowing boats. Despite flying British flags, locals had spotted the French ships, and raised the alarm. But while they waited for armed forces to arrive, the locals had to fend for themselves.

Rather than bring their own supplies, the French soldiers were encouraged to live off the land, which meant ransacking isolated cottages and farmsteads for food and supplies. Soldiers took anything they could, from livestock to pantry stores. They even binged on a bounty of wine many locals had salvaged when a Spanish ship carrying this alcoholic cargo was wrecked on the coastal rocks a few weeks before.

News quickly spread of these Celtic homesteads being pillaged and ransacked, and this incited Fishguard cobbler, Jemima Nicholas, armed with just a pitchfork, to hike the couple of miles and teach the French a lesson. At Pen Caer she stumbled across a party of 12 French soldiers, rounded them up, marched them all the way back to Fishguard, where she locked them up in St Mary’s Church. Then she went back, looking for more. 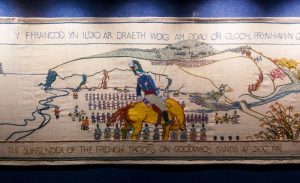 Undeterred, more French soldiers set up camp at Garnwnda, near Llanwnda Church, and raised the tricolour. From this site they had an excellent viewpoint towards Fishguard, something Jemima was later able to use to her advantage.

On February 23rd, local Welsh soldiers from across the region gathered round the outskirts of Fishguard, unsure how many French they were up against. However, their numbers were woefully short. Lieutenant-Colonel Knox commanded a volunteer force called the Fishguard Fencibles. However, despite calling up every one of his volunteers, he could only enlist 150 men. Forced to send 30 of them to Fishguard Fort to man the cannon in case of further attack from the sea, he realized he had too few men to repel the French. More British troops were on their way from Pembroke, Milford Haven and Newport, and by late afternoon on the 23rd, Lord Cawdor – who was Commander in Chief of all British forces in the area – still had fewer than 600 soldiers. Now armed with the knowledge gained from fleeing locals that the French contingency amounted to more than twice this figure, his only option was containment, rather than attack.

Despite the numerical French advantage, Colonel Tate was also having problems. Many of his men were still intoxicated from all the wine they’d consumed during their ransacking and pillaging, and were, therefore, in no fit state to fight. Some of these soldiers had been recruited from French jails, which meant they weren’t regular troops, but petty criminals of various nationalities, who believed they were bound for a better life in the West Indies. They hadn’t signed up to fight the British. Tate sent two French soldiers into Fishguard, under the cover of darkness, on the evening of February 23rd, to meet with Lieutenant-Colonel Knox and Lord Cawdor in the Royal Oak pub. Their instructions were to offer a French surrender on condition that all French troops were returned to France at the expense of the British Government.

Lord Cawdor, realising events were turning to his advantage, refused and called for an unconditional surrender. He emphasised that more British troops were arriving in Fishguard every hour, and demanded a decision from the French the following day. If they failed to surrender, the French would feel the full force of the British Army. 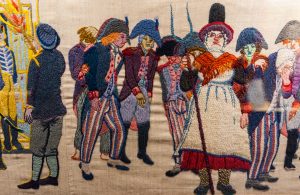 This is where Jemima Nicholas’ cunning came into play. During the first hours of daylight on February 24th, she drafted some 400 Celtic women from Fishguard to wear their traditional costume. This comprised a dark red cloak worn with two straps cutting across the chest diagonally to hold it in place. They also wore tall black hats, and black skirts. From a distance, the red and black looked like the uniforms of the British Militia. In particular, the chest straps were reminiscent of a soldier’s bandoliers, where they kept their rifle ammunition.

On the outskirts of Fishguard stands Bigney Hill, a small, rounded hill, visible from the French encampment at Garnwnda, two miles away, on the opposite side of the valley. Nicholas instructed her troops to march continuously around the hill, knowing they would be watched by the French. The illusion worked. To the French this looked like tens of thousands of British troops arriving in Fishguard, ready to do battle.

Word was sent of the French surrender and at two o’clock that day, the French soldiers camped at Garnwnda marched down to Goodwick Sands where they were met by the remaining French soldiers from the ships offshore. Together they trooped into Fishguard where they laid down their arms. The last invasion of Britain was over.

Some historians are cynical of Nicholas’ actions, but records from the event, including two letters written three days later, and an account written by one of the Fishguard Fencible soldiers, reference the stunning sight of these 400 Celtic women who, from a distance, looked like soldiers. The British Government clearly thought Nicholas’ actions were key to the success of the French surrender, and granted her an annual pension of £50.

The most famous French invasion of Britain took place in 1066, when William the Conqueror defeated King Harold at the Battle of Hastings. The French even went as far as creating a visual account of the historic battle in the form of the Bayeux Tapestry. While Nicholas’ actions proved that Celtic women are a force to be reckoned with, today’s Celtic women also have a sense of humour as well as pride in their historic counterpart.

Twenty years ago, to mark the 200th anniversary of the last invasion, 77 local embroiderers used 178 different shades of wool to create a British Last Invasion Tapestry, an embroidered account of the three-day invasion, which has exactly the same dimensions as the Bayeux Tapestry (30.4 metres long by 53 cm tall). Unlike the French Bayeux Tapestry, the Fishguard Tapestry depicts a British victory. Some might prefer to call a Celtic victory. 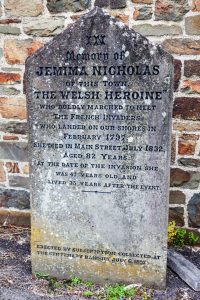 Housed in Fishguard’s Town Hall, it recounts the events in a series of scenes, including one of Nicholas, in her red shawl and black hat with her pitchfork. It’s a tapestry to be savoured. Scrutinize the detail to see chickens attacking soldiers, and green-faced soldiers being apprehended by Nicholas herself.

Opposite the Town Hall stands St Mary’s Church, where Jemima’s prisoners were kept, and where visitors will find a proud memorial stone, commemorating the life of this Celtic heroine, who passed away in July 1832, at the age of 82.

Far out to sea, just on the horizon, I spot a ferry approaching Fishguard. Today’s invaders come in peace, and from the fellow Celtic-land of Ireland, on this twice-daily crossing. I rise to my feet, and begin my journey back along the coastal path to Fishguard, keeping watch for any Celtic women – especially those carrying pitchforks.