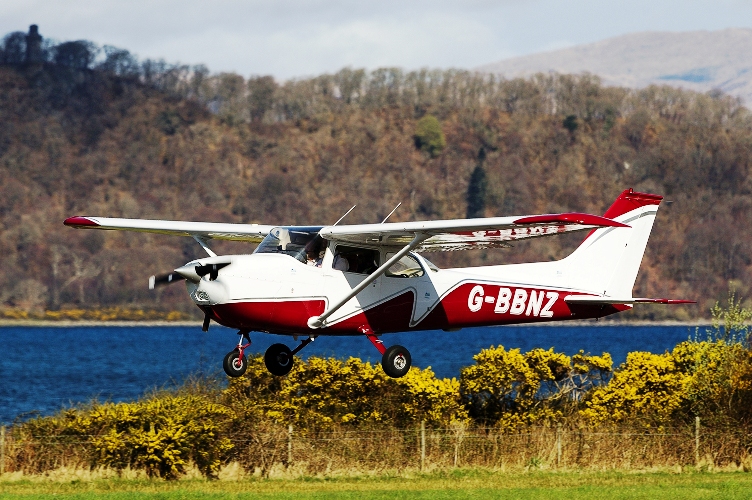 I have always loved flying, but somehow travelling in a big, commercial jet doesn’t always feel like flying – not real flying!

The first time I ever flew was as a schoolboy army cadet in a Bell 47 helicopter. This was the iconic, bubble-fronted chopper with the open lattice-tail made famous in the late 1950s television series Whirlybirds. It was every schoolboy’s dream to fly in one of these, and that trip earned me much kudos amongst my peers. The flight probably only lasted 20 minutes – perhaps up to 60 minutes during the many retellings – but I remember the rotors whirring, the tail lifting, that great, goldfish bowl of a front tipping downwards and the feeling of adrenaline pumping as we headed over the rooftops of the city. It was the all-round visibility, the sense of not being enclosed and the feeling of freedom – that was real flying! 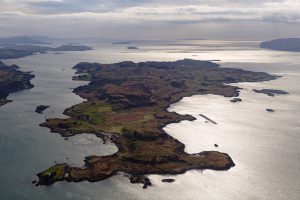 In the years that followed I enjoyed several flights in light aircraft, and I even took a few flying lessons. Then life moved on and the only flying I did was for business trips or travelling on vacation in commercial airliners. I had all but forgotten the thrill of flying until one warm, sunny day this spring I had the opportunity to get back in the skies in a Cessna 172 light aircraft – thanks to Fly Scenic Scotland.

The skies were clear – with only the occasional, wispy cloud accompanied by a light, south-westerly wind – as I boarded the little, four-seater plane at Oban Airport. My pilot and airline captain, Donald Cameron, made sure I was fastened in comfortably and that my radio headset was working. His voice crackled in my ears as he explained the safety checks, and I could hear my own responses clearly as I adjusted the microphone in front of my mouth. Cameron switched on the engine and the propeller spun into action with its gentle vibrations feeding back through the plane. He checked the flaps, revved the engine, gave his call sign to the control tower and requested permission to take-off. Air traffic control crackled back, “You are clear for take off at your discretion.” We were still on the ground and yet the excitement was palpable. Taxiing to the north end of the runway we turned to face south. The engine noise increased, the plane strained to be let loose and then we were off along the runway. As our speed increased Cameron eased the stick back, the nose lifted ever so gently and we were in the air.

Looking out below the wing I could see that the tide was high in Ardmucknish Bay to my right, and Connel Bridge eased past on my left. As we climbed we banked to take a clockwise circuit around the ruins of Dunstaffnage Castle and Chapel. Built in the early 13th century, this was once the stronghold of the MacDougalls and it is thought that Bonnie Prince Charlie’s saviour, Flora MacDonald, was incarcerated here. With good all-round visibility, the birds-eye perspective adds another dimension to the landscape and its history. I’ve walked around this castle before, but from up here it was easy to see the strategic importance of its location overlooking the Firth of Lorn. To the west lay the islands of Lismore and Mull, and to the south Colonsay, Jura and Islay lay on a blanket of sparkling blue. To the east were the mountains and valleys sculpted by the forces of nature over millions of years and so often epitomized in Scotland’s stories and songs.

No amount of maps or satellite images can replace the experience of witnessing the result of millions of years of creation from the air.

As we continued south towards Easdale I quizzed Cameron about his obvious love of flying and discovered that he had first taken to the air some 38 years ago.

He is a local man and knows the airfield and its surroundings well. Modestly he confided that he had just finished building his own plane and, when he wasn’t flying, he was a part-time fireman as well as a part-time undertaker. I reckoned that for anyone with a fear of flying that covered all the bases! 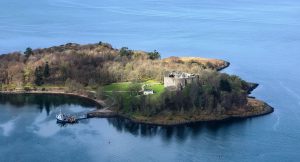 We did a double circuit around the Clachan Bridge, also known as the bridge over the Atlantic. Banking and descending so I could get some photographs, I could see the little cars crossing from the mainland to the Isle of Seil. A bit further south and we climbed to 3,000 feet before turning to head inland and wind our way back north parallel to the shore. With a final swing west over Oban harbour I watched the Calmac ferry heading into port and numerous small boats scattered across the waters below. We banked and circled the town looking down on McCaig’s Tower – a 200-foot diameter, stone folly fashioned in the style of Rome’s Colosseum. I had often looked up at it but never down into its interior from above. With a final sweep back to the airport Cameron lined us up with the runway and eased us down with barely a bump. The trip was everything that I loved about flying.

Back inside the airport building I was keen to meet the man behind the brand. Graeme Frater is Managing Director of Cloud Global and owner of Fly Scenic Scotland, and has been involved with the aviation industry for over twenty years. Leaving school when he was sixteen, his first job was with a travel agency, but after two years he started working at Glasgow Airport as a Flight Dispatcher, co-ordinating the turnaround and calculating the weight and balance of passenger flights. After seven years at Glasgow Airport came a six-year stint with an airline company based at Edinburgh airport until it went out of business in 2009. Having amassed considerable knowledge about how the aviation industry works Frater decided to start his own business, “I teamed up with two colleagues and with an investment of only £100 each we launched Cloud Global. It was based at Glasgow Airport and started as an aviation jobsite before expanding into the buying, selling and leasing of aircraft parts.” In 2016 Cloud Global acquired Perth based ACS Aviation Ltd. specializing in commercial flight training. This was followed in 2017 with the acquisition of Border Air Training providing pilot training and aircraft charter services from Carlisle, Cumbernauld and Oban Airports. As part of that deal the company acquired Oban based Fly Scenic Scotland, which it has restructured and rebranded.

Frater is aware that Scotland’s amazing scenery is a huge tourist magnet. 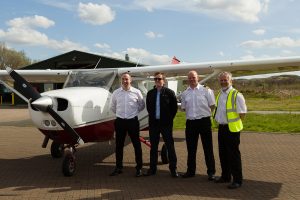 “We get many foreign visitors who want to see their ancestral home from the air or fly over the castles which have shaped the history of this nation.”

“When we rebranded Fly Scenic Scotland we were keen to incorporate the Saltire into the logo and to use green to reflect the landscape we fly over and blue for the sky we fly in.”

Oban Airport is in a prime location for the company’s core business. At present Fly Scenic Scotland offers ten pre-determined, tour-flights over different parts of the west coast. All these routes cover some of the best scenery that Scotland has to offer, but as Frater notes, “We are not restricted to those routes and we will always endeavour to accommodate the specific requirements of visitors by purpose building routes if possible.” The company has plans to continue to grow with the acquisition of more and bigger planes and Frater believes they have only started to tap into the huge tourist market.

Seeing a landscape from the air, flying over valleys, rivers, lochs and castles gives you a different experience of a place and a greater understanding of how it was shaped. That apart, there is also something exhilarating about soaring like a bird with great, all-round visibility while chatting to the pilot through your own headset, and descending, banking and turning to take a closer look at an historic landmark. Now that is real flying! ~ Story by Tom Langlands