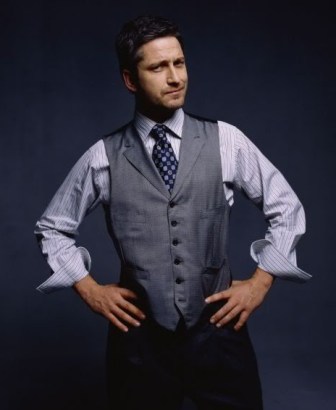 One of Hollywood’s most likeable players, Gerard Butler has built a career on being a nice guy. In the first of a two-part exclusive interview with Celtic Life International, The Paisley-bred actor opens up about his work and his Scottish identity.

Admittedly, he’s not the best actor out there, and he freely acknowledges his limits. More often than not, his reputation as a ladies’ man – after romances with the likes of Jennifer Aniston, Jessica Biel and Cameron Diaz – has eclipsed his performances, but there’s so much more to this power-packed performer…not that Butler himself would admit that.

“Sometimes I think I’m going to be found out,” he laughed in his charming West Scots brogue. “Sometimes I think people will discover that really I haven’t a clue what I’m doing, that I’m just a mouthy Scot who got lucky.”

By Tinseltown standards, Butler was a latecomer to the game. He shot to fame in 2006 when he was in his mid-thirties thanks to his hulking turn as King Leonidas in mythological comic book smash 300. He’s since cultivated an action man image with Guy Ritchie’s RocknRolla and a decent turn in last year’s flawed biopic, Machine Gun Preacher.

Despite being relatively mature when he found fame, Butler is not immune to the pressures and temptations of the film industry.

“I can see easily how the younger ones in the game go off the rails,” he said. “The money’s been thrown at you, the fans too. You’re constantly being praised and it’s hard to stay grounded. And it doesn’t matter what age you are when you start or when success hits. I was that bit older than some of the young fry setting off now but it doesn’t make any difference; it’s adulation and you have to block it out to an extent. There are a lot of privileges and opportunities taken for granted in this game, until you sit back and realize, it’s a good life.”

Of course, actors are not always adored – Butler’s recent baffling attempt at gross-out humour as a foul-mouthed leprechaun in Movie 43 didn’t exactly strike a chord with audiences, while the role of a former football pro in Playing For Keeps was a commercial disaster, although it did offer Butler the chance to play for his beloved Celtic, if only in an alternate reality.

Recently he flexed his muscles once again as a Secret Service agent protecting the White House from North Korean terrorists in Antoine Fuqua’s Olympus Has Fallen, alongside a respected cast that includes Angela Bassett, Aaron Eckhart and Morgan Freeman.

“Antoine Fuqua, the man who gave us Training Day – he’s a genius,” Butler mused. “Coupled with a cast of that calibre… I mean Freeman, Angela Basset, Aaron Eckhart…it’s like, let me just pretend I’m meant to be sharing a scene with you; that I’m at the same standard…that we’re not on completely different plains.”

After training in weapons artillery and hand-to-hand combat for his gruelling shoot in Louisiana, the 43-year-old admits the action in his movies is starting to take its toll.

“I think I can do everything,” he explained. “I’m a typical Scot in that way – nothing’s impossible. I can run and hurtle back and land on the ground. And that’s fine if you do it once, but after 20 takes, you’re cut to shreds. At one point my arm went black and blue all the way round because I was doing this same kung-fu move over and over. I’m no spring chicken anymore.”

He flashed that twinkly grin. “And you’d think I’d have learned my lesson after Hawaii.”

While on the set of surf movie Chasing Mavericks off the coast of Oahu nearly two years ago, Butler was caught out by a series of freak waves. “It’s like you’re in an avalanche and you don’t know if you’re ever coming up. You can’t breathe and there’s nothing you can do about it.

“It was so scary and frightening as I just couldn’t get up to the surface. So for future movies, I’m starting to see the logic in hiring a stunt guy. But it’s hard because you want to be on that chopper, you want to be surfing that wave or you want to be in that fight. You want to be doing the sh*t that boys do.”

Born in Glasgow, Butler was immediately relocated to Montreal in Canada for the first two years of his life, before returning to home shores with his mother when he was two-and-a-half years old. It’s a transition he praises her for.

“My mum decided to leave my dad, and Montreal, because that wasn’t going well. She brought us back to Scotland. That was a big decision and I have nothing but respect for her for making it.

“She didn’t have an easy time,” he shared. “My mother is ultimately like my hero. When she came back to Scotland she had three kids – and absolutely nothing else. She ended up taking night classes and became a lecturer in business studies. She then went on to become a senior lecturer at college, which is a big thing, and brought up us three kids on her own.

“It’s superhuman stuff. I don’t know if I could ever do it, but I loved my childhood. I was raised next to Paisley and, coming from a huge Irish Catholic extended family, there was so much love surrounding us. There was also a passion for being Scottish, and you didn’t have to leave Scotland to feel it.”

Butler added: “For me, Scotland is home. Scotland is my roots and, you know, you always get that feeling when you arrive back, each and every time.”