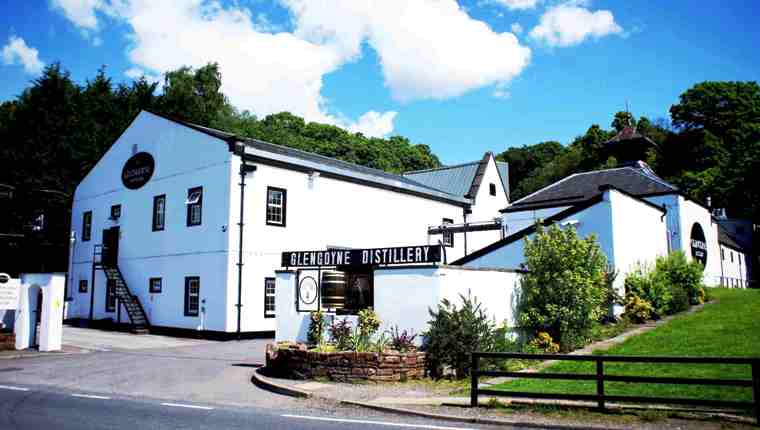 The line dividing Scotland’s Highlands and Lowlands is both physical as well as emotional. The Antonine Wall was built near this boundary between 142 and 144 CE on the orders of Roman Emperor Antoninus Pius. It drew a rough line across what is now the Central Belt, from the Firth of Clyde to the Firth of Forth. The wall was built to protect the areas north of its more famous predecessor, Hadrian’s Wall, which was built twenty years earlier. Hadrian’s Wall was erected to protect the Roman province of Britannia from the savage Caledonians. Pressure from these Pictish people is believed to have compelled the Romans to seize the Scottish Lowlands and build another wall to provide them with a buffer zone. A classic case of Imperial overreach, the Antonine Wall was effectively abandoned within twenty years of its construction, and was only briefly reoccupied in 208CE. The wall crumbled with time, but the Highland Lowland boundary continued to play a pivotal role in shaping Scotland for the following two Millennia.

Located just north of Glasgow, the Glengoyne Distillery sits on the line which divides the Highland and Lowland whisky regions. While the still house is in the Highlands, the whisky matures in warehouses on the other side of the A81 in the Lowlands. It is nestled up against Dumgoyne Hill, a 427-meter volcanic plug, nestled in a tiny glen with an abundant supply of water. Although officially established in 1833 when George Connell acquired a license to distill at Glenguin of Burnfoot, he had been making whisky on the site since 1820. George is said to have learned the art from his grandfather. Legend has it that the site had a long history of illicit distillation, to which it was well suited. Just up the hill from barley fields at Burnfoot Farm was a hidden waterfall in a miniature glen, conveniently out of sight of prying eyes. The treeless top of Dumgoyne Hill also provided an excellent vantage point from whence to spot a coming Exciseman. 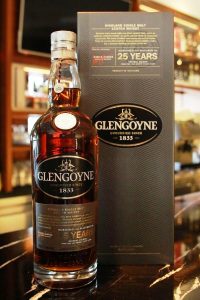 The 1870s were a pivotal moment for the distillery, because it was then that Glenguin began maturing whisky in sherry casks. At the time it was a change made solely to save money on oak, but it would come to define the distillery’s style for the next 100 years. Ever since the whisky’s first bottling as a single malt in the 1990s, it has been renowned for its a rich, sherried flavour. The distillery produces a spirit with a gentle, sweet and fruity character, but with enough weight to stand up to full term sherry maturation.

The name Glenguin translates to the Valley of the Wild Geese. In 1876 the distillery name was shortened to Glen Guinafter a change of ownership, though it seems this was a clerical error. It was supposed to have been anglicized to Glengoyne, a change that would not occur until 1907. Glengoyne was acquired by Ian Macleod Distillers in 2003, from the Edrington Group (owners of Macallan) who have turned the distillery’s focus to single malts. This is to the benefit of single malt whisky aficionados, as the distillery’s production capacity of 1.1 million liters, puts it in the bottom third of Scottish distillers by size.

Independent bottlings of Glengoyne are few, but the official bottlings are excellent value and well put together.

Glengoyne is a classic example of ‘you get what you pay for’, but especially so with respect to their older expressions. Notable highlights from their large core range are the Cask Strength ($81), 15 Year ($90) and 21 Year ($215). The Glengoyne 25 Year old is currently my favourite distillery bottled 25 year old whisky. Priced at $410 and bottled at 48%, it is a rich and flavourful malt, and ¼ the price of the world’s most iconic 25 year old Scotch!

Glengoyne can easily be visited from Glasgow on a day-trip, or as a first stop on your way deeper into the Highlands. There is even a modest nearby section of the Antonine wall you can visit if, like me, you are in to such things. The distillery is also mere miles from the iconic Loch Lomonds and the Trossachs National Park. If you are in the area you owe it to yourself to pop into this charming little distillery. While there pick up a bottle of the Teapot Dram, a whisky you can only buy at the distillery. Like the distillery itself, the whisky has a compelling story to tell!  ~ Andrew Ferguson