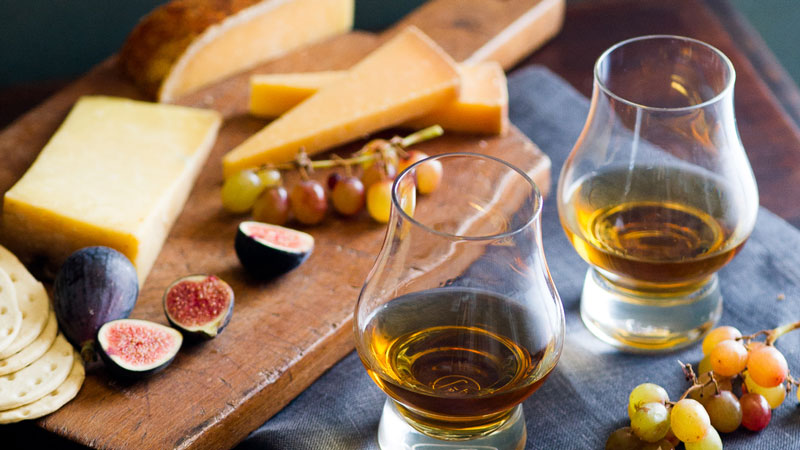 Wales, the Welsh language, Celtic myths and Arthurian legends were all influences on the works of J.R.R. Tolkein. Perhaps for those reasons dragons and gold fascinated him also. In The Lord of the Rings Tolkein penned ‘All that is gold does not glitter’, and in The Hobbit the great dragon Smaug protects its gold deep under the Lonely Mountain. With these thoughts in mind I set out to discover if there is indeed a gold that does not glitter in Wales – the land of the iconic red dragon.

Wales’ industrial heritage is founded on iron and coal. The town of Blaenavon in southeast Wales grew up around an eighteenth century ironworks and associated coal-mining industry. Today it is a UNESCO World Heritage Site, and its coal-mining heritage is celebrated in the Big Pit National Coal Museum. During the Industrial Revolution coal was such a valuable commodity that it was known as ‘black gold’.

Susan Fiander-Woodhouse and her husband Gerry Woodhouse are the owners and founders of Blaenafon Cheddar Company on Blaenavon’s Broad Street. Fiander-Woodhouse was born in Walton on Thames, London, to a Welsh mother and a Cornish father but has lived in Wales for over forty years. She worked in the cheese industry for twenty-three years, beginning as a development chef for a large company before starting her own family business in 2006. Blaenafon Cheddar Company specializes in making naturally flavoured Welsh cheeses, including smoked cheeses and cheeses flavoured with mustard, ginger, leek, elderflower, white wine, and whisky. The company’s list of awards includes True Taste of Wales 2007, 2009 and 2012; British Cheese Medals 2007 and 2010; Winners of the Monmouthshire Business Awards ‘Excellence in Small Business Food and Drink Producers 2017’, and two medals in the International Cheese Awards 2017. 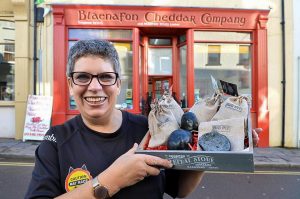 Prior to the founding of Blaenafon Cheddar Company, Fiander-Woodhouse realized there was an opportunity for a cheese business to tap into the history of the area in a practical way. “At the bottom of the mineshaft 300ft (90M) below Big Pit’s winding wheel the 50 degrees Fahrenheit (10 degrees Celsius) ambient temperature and the dark, humid conditions are perfect for maturing cheese.” She got permission from the National Museum of Wales to mature her products in Big Pit, noting that “We now have five products that are matured underground and all of them except the newest one are international medal winners. Once every two weeks we do a cheese swap when the miners bring the cheese to the surface and then take down the next batch.”

The newest cheese may not yet have won any awards, but the first batch was only brought to the surface in January of this year and it may indeed be something to sing about – its creation was the result of a suggestion by local singer-songwriter – Ragsy.

In 2013 Ragsy (Gary Ryland) – mentored by fellow Welshman Tom Jones – reached the finals of The Voice U.K. He hails from nearby Aberdare and is passionate about all things Welsh. As a family friend, Fiander-Woodhouse would go to hear Ragsy anytime he performed locally. She recalls, “It was Ragsy who suggested that it would be good to produce a charcoal cheddar as one of the cheeses matured underground.” As a proponent of heritage tourism, that suggestion got her thinking about how to produce a cheese that could reflect the heritage of an industry that was once the life-blood of a nation. The result is Black Gold, a mature, cheddar cheese that is further matured for two weeks in Big Pit. Once removed from the mine, natural charcoals derived from coconut husks are added to the cheese giving it a dark grey colour. The cheese is then handcrafted into coal shaped lumps and finished with a thick, black, wax coating. Each coal-shaped cheese is then presented in a small, sack bag with a drawstring. Black Gold is dark and strong and its initial, slightly textured feel on the tongue gives way to a beautifully smooth sensation with hints of toasted flavours as it melts in the mouth.

Now, I have a penchant for single malt whisky to accompany good cheese, and being a Scot I am rather spoiled for choice.

But it was a gift of a bottle of Penderyn, Madeira-finish, single malt Welsh whisky that piqued my interest in an altogether different, but complimentary, Welsh gold. 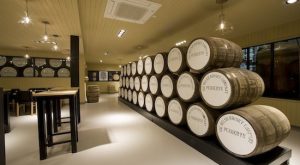 Twenty-five miles (40Km) west of Blaenavon, and not far from Ragsy’s hometown of Aberdare, is the village of Penderyn – its name synonymous with the Welsh miner and martyr Dic Penderyn who took part in the Merthyr Rising of 1831. That social protest saw a soldier of the Crown stabbed in the leg and Penderyn dubiously found guilty and hanged for the offence. Here, on the southern edge of the Brecon Beacons National Park, the Welsh whisky industry is being reborn: an industry that was effectively wiped out in the late nineteenth century by the temperance movement.

Penderyn Distillery was created by a group of friends who wanted to produce a whisky to stand proud alongside the spirits produced by their fellow Celts in Scotland and Ireland. The Penderyn site was chosen on account of its access to natural, spring, rainwater run-off from the Brecon Beacons. The distillery has its own unusual style of single copper-pot still designed by Dr David Faraday, a descendent of the eminent Victorian chemist and physicist Michael Faraday. Unlike the curvaceous copper stills of Scotland’s distilleries, the Penderyn still has a more utilitarian and industrial appearance. However, the process of heating the malted barley wash and collecting the resulting vapour on a series of metal plates within the still gives rise to a faster maturation process than the double or triple distillation processes of Scottish or Irish distilleries.

By the time the vapour has passed through the still and condensed to arrive in the spirit safe the result is an incredibly smooth spirit at a staggering 92% alcohol by volume. This whisky spirit is then married with the Brecon Beacons spring water drawn from below the distillery.

Penderyn’s Media Manager, Jon Tregenna, explains how the diluted spirit is then matured in charred, oak casks from the American bourbon industry.

“Our Welsh forefathers were the pioneers of the American bourbon industry. Evan Williams – from Dale in Pembrokeshire – was one, and his bourbon is still produced today. Currently, we utilise ex-bourbon casks to create the unique flavour and complex taste to our whisky.” The house-style range of Penderyn malts is then finished in former Madeira wine casks to bring out the character that exemplifies this Welsh gold. The distillery now has two Faraday stills and recently added two lantern stills. The different stills permit experimentation with other tastes and flavours. 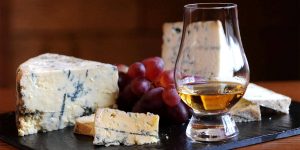 Penderyn distillery bottled its first ‘gold’ whisky in 2004 in the presence of Prince Charles. It has since expanded its range to include Portwood, Peated and Sherrywood finish whiskies and the Icons of Wales range – to date, five distinct malts including Dylan Thomas and Red Flag – the latter commemorating the raising of a red flag during the protest that resulted in the execution of Dic Penderyn.

Reckoning that Tolkein knew a thing or two about Wales I relaxed with my whisky and cheese to the sound of Ragsy’s album Ouch. The lyrics from the track Feels Like Home rather summed up how I felt about both my new-found Welsh golds – “I’ll keep on feeding off this land until my soul is satisfied…”