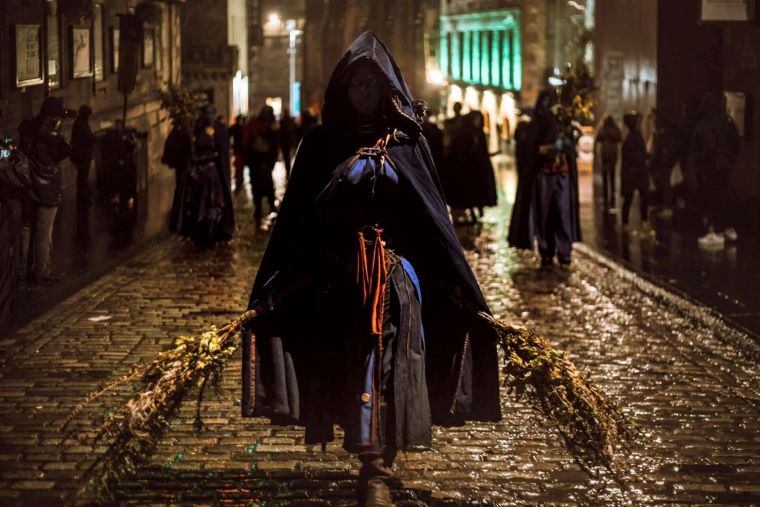 The origins of Halloween can be traced back to the ancient Celtic festival of Samhain (summer’s end). The Celtic year was determined by the growing seasons and Samhain marked the end of summer and the harvest, and the beginning of the dark cold winter. The festival symbolized the boundary between the world of the living and the world of the dead.

It was believed by the Celts that on the night of 31st October, ghosts of the dead would walk again amongst them, and large bonfires were lit in each village in order to ward off any evil spirits. All house fires were put out and new fires lit from these great bonfires.

Whilst bonfires to scare away the undead are still lit in some areas of Scotland, more usually “neep lanterns” (turnip lanterns) are made by scooping out a turnip and cutting through the skin to create eyes, nose and mouth. A candle is then placed inside to make the lantern. These lanterns are also supposed to ward off evil spirits. Nowadays thanks to the influence of American culture, pumpkins are as common as turnips for lanterns.

Many of the traditions Burns mentions in his poem ‘Halloween’ still persist in Scotland to this day. From the second verse:

Some merry, friendly, country-folks
Together did convene,
To burn their nits, an’ pou their stocks,
An’ haud their Hallowe’en
Fu’ blythe that night…

As mentioned in the lines above, a common Halloween tradition was for an engaged couple to each put a nut on the fire. If the nuts burned quietly then the marriage would be happy, however if the nuts spat and hissed then the marriage would be stormy. Similarly, if a girl put two nuts on the fire, one for her lover and one for herself, and the nuts spat and hissed, then this was a bad omen for their future together. 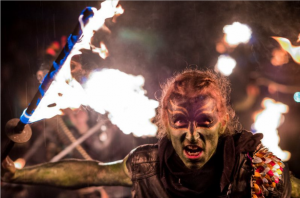 Until recently, ‘trick or treat’ was unknown in Scotland. Instead children dressed up and pretended to be evil spirits and went ‘guising’ (or “galoshin”). The custom traces back to a time when it was thought that by disguising children in this way they would blend in with the spirits that were abroad that night. Children arriving at a house so ‘disguised’ would receive an offering to ward off evil. Today it is expected that the children, as well as dressing up, also perform a party trick – a song or a dance, or recite a poem, for example – before they are offered a treat which could be fruit, nuts or more commonly nowadays, money or sweets.

The Witchcraft Act of 1735 contained a clause preventing the consumption of pork and pastry comestibles on Halloween. The act was however repealed in the 1950s so it is now legal to also offer pork pies or sausage rolls to children as treats!

“Dookin’ for apples” is a Halloween party game which involves taking an apple floating in a basin of water without using your hands, either by spearing it with a fork held in your teeth or by biting it. This is another Halloween tradition with its roots in pagan times. The origin of bobbing for apples stems back to the ancient Celts who held apples as sacred.

In fact you could say that the modern-day Halloween traditions of pumpkin lanterns, bobbing for apples and trick-or-treating have their origins in the ancient Celtic traditions.