Home to Donegal ~ Cúig (The Last King of Ireland) 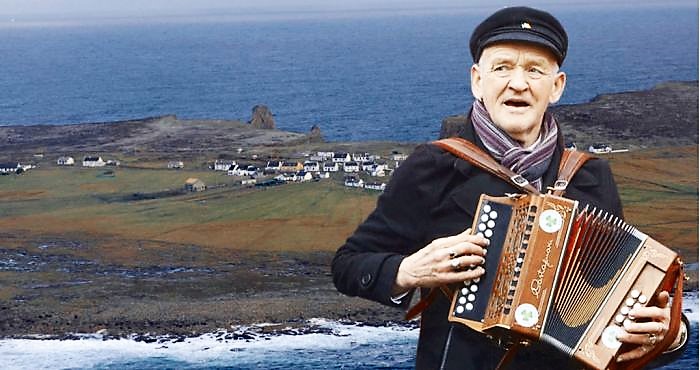 The truth is that most of us are descended from poor Celtic peasant stock, and, in the presence of titled folk, we tend to genuflect in obeisance – it’s habitual, a kind of genetic response to a benediction from well-heeled royals.

There are, in fact, more bluebloods around than we can shake a sceptre at. But why we’re so captivated by the foreign variety, especially since we have royals of our own, isn’t just puzzling, it’s downright maddening.

Patsy Dan Rodgers was, after all, an Irish king. Not king of Ireland, mind you, but King of Tory Island, a domain lying nine miles off the Donegal coast in the broad, windswept Atlantic. An affable Renaissance man, whose kingdom and claim to nobility would dwarf those of most European Royals, Patsy Dan was “the real thing.”

He was quick to explain that Tory kingship isn’t hereditary, that it’s kingship by consensus, a likely holdover from the age of Gaelic chieftains and brehons. 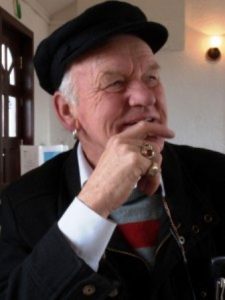 A King is the Island spokesman and negotiator and has, as well, certain regal ceremonial duties.

He met and greeted all visitors to Tory on their arrival: “A pleasure to welcome people from the country,” meaning Ireland itself, offering guests a genuine “God be with you” – a very civilized Irish and kingly thing to do.

Protocol-conscious visitors, making their way up Tory pier nervously ask if they should have addressed the king as “Highness” or “Excellency” or “Majesty” and/or bow or kiss his ring?

But Patsy Dan would have none of that. He laughed heartily and said, “No ring kissing here. The crown jewels and rings have been put away for the duration.”

The King’s summers were crowded with visitors; academics, birdwatchers, folklorists, musicians, students and tourists. The remainder of his Tory year was relatively quiet, however, allowing time for him to sketch and paint the landscapes and seascapes that earned him a reputation as one of Ireland’s most sought-after artists. His works are still exhibited in mainland galleries and well beyond.

At an academic conferral – he had received an honorary degree from the University of Ulster – Patsy Dan acknowledged the institution, then reached for his accordion and struck up a rousing medley of Tory favourites. His brilliance and spontaneity brought down the house.

Clever and resourceful, he recognized that songs, singers, and dance are all great Tory traditions. “We are the embryonic source of Irish and Scottish cultures – the remnants of true Celts.”

In addition to promoting music and the arts, he was himself a historian, folklorist, fisherman, guide and storyteller with a wealth of mythological tales inherited from Tory seanachies.