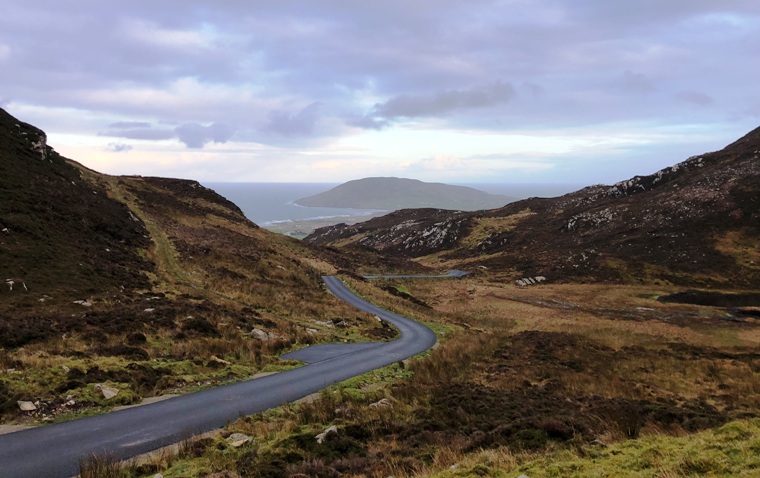 Ask visitors to name the most “Irish” part of Ireland and they will likely list the obvious; Dublin, the country’s bustling capital city in the east, or perhaps Kerry in the southwest, where the landscape is plush and pure, or maybe Galway on the western coastline, where culture, claddagh and ‘craic’ collide.

Ask the Irish, however, and they will say that you won’t find greener pastures than in Inishowen, Co Donegal.

Known as “The Forgotten County,” Inishowen’s present population is a mere 40,544. It is the largest peninsula in Ireland, measuring 884 square kilometres (218,523 acres), bordered to the north by the Atlantic Ocean, to the east by Lough Foyle, and to the west by Lough Swilly. Though joined at the south to the Republic, the southeastern part of the region rests in Co. Londonderry, Northern Ireland.

Despite those geographical ties, Inishowen’s Gaelic name is Inis Eoghain – meaning “own island.” 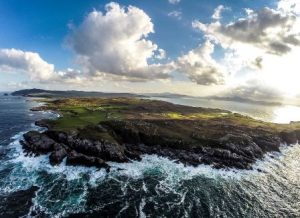 “The name is quite fitting actually,” shares area tour guide Henry Doohan. “Inishowen has always had an independent spirit. It is sort of its own little world, and folks here have always kind of just done their own thing. Our slogan for years was ‘up here, it’s different.’”

I reply that, as a native Montrealer with Newfoundland roots, I am familiar with the idea of a ‘distinct society’.

Doohan nods and smiles, acknowledging the quirky and curious nature of “islanders” – like we are members of some sort of secret society.

Though just 36 years-of-age, my guide for the day is wise beyond his years. Personable and professional, he is more knowledgeable about the region than most.

“My family roots here go back generations,” he notes. “I don’t see why that would change with me and my children. We are happy here.”

That solid sense of self-identity, he adds, runs in the blood.

“It gave us, as a people, both the will and skills to survive during some very dark and troubling times. In that way, Inishowen is kind of a microcosm of Ireland.”

As we wind our way along the craggy coastline, passing old stone homesteads, farms and makeshift roadside shrines before visiting rugged Malin Head and Fanad Head Lighthouse – two of the four signature stops on Donegal’s Wild Atlantic Way route (the others being Sliabh Liag and Glenveagh National Park) – wind and rain lash against land and sea.

“There is no such thing as bad weather here,” says Doohan, “only bad clothing.”

I remind him that, as a Canadian – and a seasoned traveller – I am prepared for any environmental scenario. As such, I step out of the vehicle often to snap as many pictures as possible. The photo opportunities at the mainstay tourist stops are spectacular, of course. However, I am more interested in the “in-betweens” – the lesser-known, out-of-the-way spots – where the hidden soul of this land and its people reveal themselves. It is here that the sea is a wee bluer, the pastures a wee greener. 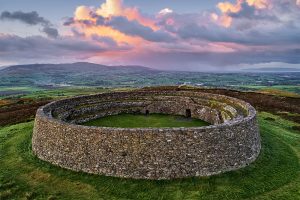 The exception is Grianan of Aileac, an ancient Celtic ring-fort, thought to have been built by the Northern Uí Néil dynasty in the 7th century. Sitting atop the 800-ft high Greenan Mountain, the 16-ft high stone structure offers panoramic views across hills and valleys, overlooking both Lough Swilly and Lough Foyle.

Interestingly, the talk turns to Brexit

“At this point, no one really knows what is going to happen,” says Doohan. “It will likely be a pain in the arse more than anything to be honest, especially if they end up going with a hard border; no-one really wants the hassle of waiting in line or going through the paperwork.”

Another area tour guide, John McGroary of Donegal, believes that Brexit will be bad for business on both sides of the border.

“Derry is the hub of the north, where the Wild Atlantic Way meets the Causeway Coastal Route. The city, and the whole region, has enjoyed a lot of traffic since the Peace Accord was signed in 1998. A hard border would probably reduce that flow significantly.”

Lesser numbers, of course, would have a major impact on local and area economies.

“We rely heavily on travellers and tourists,” notes James Huey of the Walled City Brewery in Derry’s hip, burgeoning Waterside district. “Fewer visitors hurts us all and could mean trouble for a lot of young entrepreneurs like myself who chose to settle down and set up shop here.”

Trouble of another sort is also a concern, especially given the area’s painful political past.

“There are a lot of people here who are scared that it will push things back to the way they were before – back to The Troubles,” shares Eugene Coyle, a sixty-something cabbie who shuffles back and forth between Inishowen and Derry several times each day. “And we have already seen some fallout with the car-bombing here in the city-centre this past Saturday night. I mean, if I were a young person, perhaps with a new family, I might start considering my options.’

As we cross the border from Donegal into Derry, under both rainclouds and a cloud of political uncertainty, my thoughts turn to those, whom – like my own ancestors did generations ago – might now again depart this plush, picturesque northwest coast in search of a better life.

In truth, one would be hard-pressed to find greener pastures. 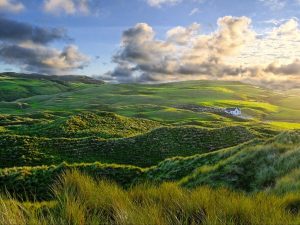 Tonight we’ll build a bridge
Across the sea and land