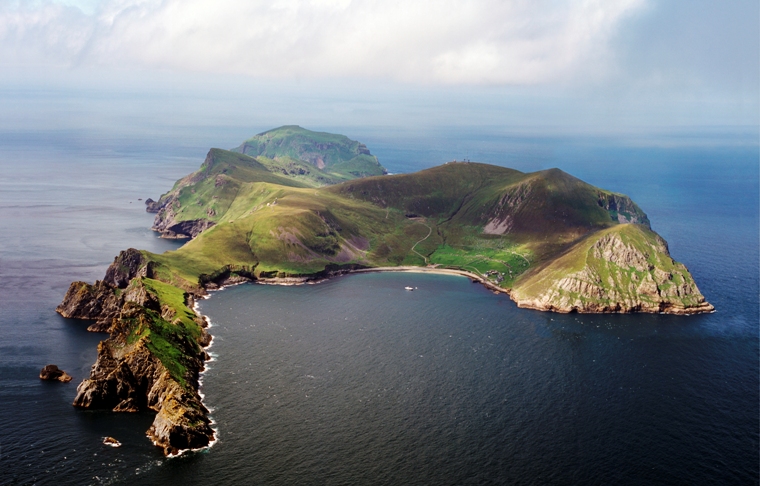 Unbelievable. Overwhelming. Voyagers who have visited the archipelago of St. Kilda more than a dozen times declared this The Best Visit Ever. If they had said anything else, the rest of us would not have believed them; bright sunshine, balmy temperatures, no wind – was there even a single cloud in the sky?

During the morning, after arriving in this vicinity aboard the Ocean Endeavour, the day had looked less promising. Most ships that reach St. Kilda never land a soul – the winds are too rough. Today, a serious swell caused people to doubt that we would make it ashore. But in an inspired bit of decision-making, our Adventure Canada expedition leader turned the day upside down, switching early with late.

Instead of attempting a morning landing, we sailed directly to the bird cliffs of Stac Lee, home to the largest colony of gannets in the world. As the winds died and the sun came out, the captain showcased his navigational skills. Seventy or eighty metres in front of the towering black wall, he held ship steady. We found ourselves gazing almost straight up at a whirlwind of wheeling birds more than 400 metres above. I’m no birder, but this was impressive. 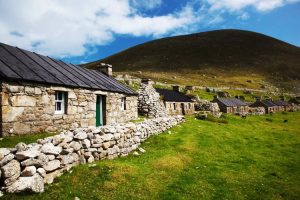 A back-deck barbecue kept us busy as we sailed to Hirta, the archipelago’s main island. This is the remotest part of the British Isles, 66 kilometres west of Benbecula in the Outer Hebrides. I had landed here once before and knew enough to remain dubious. But on arriving, we found the swell had receded. We piled into zodiacs and zoomed ashore. Incredible!

St. Kilda is one of very few places with Dual World Heritage Status for both natural and cultural significance.

Bronze Age travellers appear to have visited 4000 to 5000 years ago, and Vikings landed here in the 800s. Written history reveals that a scattering of people (around 180 in 1700) rented land here from the Macleods of Dunvegan on the Isle of Skye. While living in a settlement (Village Bay) of stone-built, dome-shaped houses with thatched roofs, they developed a unique way of life, subsisting mostly on seabirds.

Gradually, as better ships enabled more contact with the outside world, residents began to rely more on importing food, fuel and building materials. They constructed better houses. In 1852, 36 people immigrated to Australia, beginning a long and slow population decline. During the First World War, a naval detachment brought regular deliveries of food. When those ended after 1918, St. Kildans felt increasingly isolated. In 1930, the last 36 islanders were evacuated to the Scottish mainland.

During our recent visit, we strolled along the curved Village Street where these last holdouts had resided. Most passengers found time to climb the saddle between two high hills. After a rise in elevation of perhaps 150 metres, we came to a cliff edge. Gazing back over the vista in the sun – the Village Street, the scattered beehive cleits, the Ocean Endeavour in the harbour, the occasional zodiac, the distant mountains – a consensus emerged: unbelievable!

Beyond this, everyone had their personal highlights. I registered two. The first came when I found the beehive cleit that, today, stands on the foundations of what was once the home of Lady Grange. She was an articulate, headstrong woman who, in the 1730s, spent eight lonely years as a prisoner on this island. While living in high-society Edinburgh, she learned that her husband was having an affair in London. Infuriated, she had threatened to expose him as a treasonous Jacobite.

That gentleman – who was indeed conspiring with such powerful figures as Macdonald of Sleat, Fraser of Lovat, and Macleod of Dunvegan – responded by having his irrepressible wife kidnapped and bundled off, ultimately, to this almost inaccessible island. Here Lady Grange endured as the only educated, English-speaking mainlander on Hirta except for the minister and his wife. Her house is long gone, but a ranger directed me to the hut that stands today on its foundations – it made me shiver to see it. 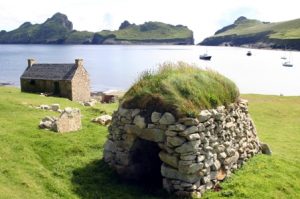 The second moment found me visiting Calum Mor’s House, one of the oldest dwellings on the island. According to legend, young Calum built it in a single day to prove his worth. He had been passed over for the annual fowling expedition to Borera, a smaller island in the group that makes up St. Kilda. This happened a thousand years ago, and I found my imagination racing.

The September expedition to Borera, six kilometres away, was the one great adventure of the year. The strongest men would risk their lives paddling through rough seas to harvest hefty birds – young gannets called gugas – that had to be killed at night while they slept on slippery ledges. Often, the men would stay a few days on Borera, sheltering in the stone cleits or storage houses they had previously erected.

In my mind’s eye, I could see the aggrieved Calum Mor building furiously with these heavy stones, bent on showing those who had voted against him that they had been wrong, wrong, wrong.

I knew, of course, that the story was apocryphal. Anyone working alone could never erect such a structure in a week, never mind a single day. But the fleeting vision, the racing of the imagination – that is what I seek when I travel. And that, in conjunction with the Village Street and Lady Grange, is what CalumMor delivered.